Shiloh Walker is an award-winning writer…yes, really! She’s also a mom, a wife, a reader and she pretends to be an amateur photographer. Now she’s going to try her hand at reviewing…temporarily. You can find Shiloh on her website or on Twitter. 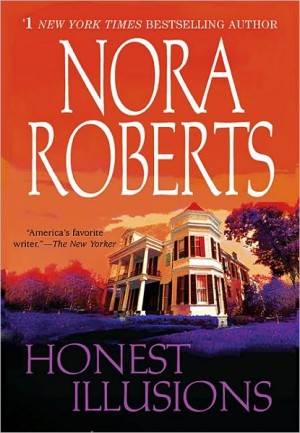 And yep, there was a book.

Folks, I have to be honest and admit this here and now, without Luke and Roxy, I don’t know if I would be doing what I’m doing right now.  I write what I love to read, and this is the book that hooked me. I’d read a romance or few before this one, but I’d never been pulled into a story quite like this before.

It was almost magical, really.

Which is appropriate, considering this book is all about magicians.

The book opens up with a prologue—it’s short.  Roxanne—Roxy—performing an illusion in front of an audience.  That right there was enough to hook me.  I’d been fascinated by magicians ever since David Copperfield made the Statue of Liberty disappear—by the way, I once got called on stage with him.  It was awesome.  Anyway, back to the book.

Roxy finishes her illusion, leaves the stage to the roar and applause coming from the audience and goes to her dressing room.

There is a drop dead sexy man there and the tension between them all but makes your teeth ache.  It’s been five years since Luke Callahan up and disappeared, without a word, from Roxanne’s life and now he thinks he come crawling back?  Oh, no. That’s what Roxy thinks.

There is kissing of a potent and passionate nature.  You know, the kind you think is going to lead lots of other potent, passionate things?

Nope.  The prologue ends and we find ourselves reading about Luke…back when he was twelve years old, a runaway who is bound and determined to escape the hell that had been his home.

This is when he meets Max Nouvelle, the man who is going to change his life.

They are performers in a travelling carnival, performing magic acts and watching them, for the first time in Luke’s rough life, he finds himself just lost.  He’s able to lose himself inside the show.  While he’s watching, he forgets why he went inside the tent where the show was going on in the first place—he’d gone to pick a few pockets, steal some money from a few purses.

He managed to take a little money before he got caught up in the show. But he didn’t realize Max had had an eye on him the whole time.

I could go on forever but some people might want to actually read the book…so, we’ll sum it up. Luke finds himself basically adopted by Max.  He has a home, he’s loved, he’s happy…even if he does find Roxanne annoying.

Fast forward it a few years, oh, say ten.  The annoying brat still annoys him but naturally, it’s for different reasons.  He’s a grown man…she’s trying to convince her father to let her join the ‘other’ family business.  You know, the one where they sneak into the homes of rich people, steal jewels or paintings—always insured stuff.  They have their own code—an honor among thieves, if you will.  They wouldn’t steal from friends and they don’t steal from people who can’t afford it and the stuff they take is insured.

Of course, Max tells Roxy she isn’t ready…Luke agrees with him and not just because he doesn’t want to spend up close and personal time with her.

This pattern continues for a few more years—eventually Roxanne does get what she wants.  In on the family business of larceny…and Luke.  She has to go all out to seduce him, because the man has this idea in his head that it’s wrong, but she wants what she wants.

Things should be A-OK.

And that’s when the wrench gets thrown in.

You’ll have to read it to find out.

What do I love about this book?

It’s a first love sort of tale, reunited lovers…it’s got vengeance and glamour and magic.

When I sat down to read it a few days ago, I realized it’s probably been ten years since I have read it, maybe longer.  It’s hard to believe it’s been that long because this is the book that had me all but racing my bike back to the library to find more more more when I was done.

It wasn’t my first romance book—that was The Wanton by Rosemary Rogers and I was twelve.  Not too long after that, though, I discovered fantasy…Mercedes Lackey lured me in.  Then there was Stephen King and all that weirdness that awaited there.  So yeah, I’d read romance…I was just more into other stuff for most of middle and high school.

But then I met Luke and Roxy.  After that, I started gobbling up as many Nora Roberts books as I could.  She led to so many more.  More than twenty years later and I don’t know how many books, this is the one that stands out the clearest.

You’ve got the great storyline, the suspense thread, all the magic and the larceny. There’s Roxy with her confidence and her I’m not taking your crap attitude.  She was strength and grace and determination and stubbornness.

There was Luke.  Wow. Okay, this is like…shades of Roarke.  I can almost see the echoes of how Roarke could come into being when I read this.  There’s the thievery, the intelligence, the hungry child desperate for something more.  And both of them are so pretty.

Luke has a messed-up past and it drives him to do some reckless things, and then, some desperate things, things that send ripples throughout the book.  It was his love for Roxy, Max, and those who’d come into his life that drove him.

Max, Lily, Mouse…I loved them.  The supporting characters are amazing and part of me hurt so bad as life played out, because yeah, even in fiction it does.

The villain, well, let’s not go there, but he’s one of those cunning, sly bastards that hurts just to hurt.

The one weakness I see in the book is how a cunning, calculating SOB cracks so easy at the end.  Now this guy does not come off as sane, but he’s been so slick, and so determined to have revenge on his imagined slights, and it takes little to push him over.

That’s the only weakness I see in this book, but even that’s not enough to make say anything less than…I love it.  I won’t so long to reread it next time.

Even after twenty plus years, it’s still one of my favorites, and yeah, I’m pretty sure I have to thank Luke and Roxy for my love of romance.  Well, maybe I should thank Nora Roberts, instead.