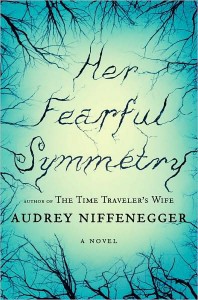 I was one of the many readers positively enthralled by your debut novel, The Time-Traveler’s Wife. Here was a book that was smart, funny, romantic and tragic. It was one of my favorite reads of 2004 (it would probably rate fairly high on my all-time favorite novels list, actually). I have waited five years for another novel from you. I haven’t tried either of your illustrated novels, The Three Incestuous Sisters or The Adventuress – I probably will some day but the length of each (under 200 pages) and the plot descriptions made them sound different enough from The Time-Traveler’s Wife that they would not necessarily satisfy my longing for a similar reading experience.

Her Fearful Symmetry didn’t either. At least not completely. Fans of The Time-Traveler’s Wife hoping that this book will have the same romantic sweep and focus on a traditional hero/heroine relationship will be disappointed. The pleasures of Her Fearful Symmetry are subtler, I think. I found myself going through a range of emotions while reading it, and for a while after, as well. I’m still not sure how I feel about the ending.

The book opens with Elspeth Noblin dying in a London hospital of cancer. Her younger lover, Robert, is completely undone by her death and finds himself repeatedly visiting the mausoleum that houses her body in Highgate Cemetery, which abuts the apartment house, called Vautravers, where both Elspeth and Robert lived (in separate apartments).

Elspeth had a twin sister, Edie, from whom she was long estranged – there was (unspecified for most of the book) bad blood over Edie’s boyfriend (now husband) Jack, and Edie has made her home in America for the past 20 years with Jack and their twin daughters, Julia and Valentina. Julia and Valentina are mirror twins, nearly identical and fiercely close. They are drifting through life and living at home, having dropped out of several colleges, each time at the insistence of the dominant Julia. When they find that the aunt they never knew has bequeathed them her estate, on the condition that they inhabit her London flat for one year before being allowed to sell it (and that Jack and Edie are not to step foot into it), they see the opportunity for escape. Julia is hesitant; paradoxically for the more confident twin (her nickname for Valentina is “mouse”, and it’s a nickname that’s not without its sting) she is more comfortable with their ennui. Valentina is the one with ambition, at least in theory – she is interested in fashion design, for one thing – but she lacks the assertiveness to follow through, especially with Julia’s oft-expressed assurance about what “they” want and her reinforcement of their respective roles.

Julia and Valentina arrive in London and settle into the flat. They are unaware, at first, that Elspeth has never left it – her ghost has lingered in the apartment after her death, slowly gaining self-awareness and strength. What Elspeth wants, and how she goes about getting it, is a mystery that unfolds throughout the book.

Robert is supposed to be helping the girls settle in, but finds himself unable to face them; the twins’ resemblance to Elspeth unnerves him. He avoids them by not answering the door when they knock, but still finds himself surreptitiously following them as they explore London. When they finally do meet, Robert forms a connection with Valentina, one which Julia feels threatened by.

The third flat in the apartment building is occupied by Martin, a middle-aged man whose intense OCD renders him unable to step over the threshold and go outside. His first appearance in the novel is at Elspeth’s funeral, and it’s only gradually that the reader comes to understand that this was a nearly superhuman feat for him, the first time he’d left the apartment in years. He’s accompanied to the funeral by his wife of more than 20 years, Marijke. But Marijke abruptly leaves Martin after the service, moving back to her native Amsterdam. She loves her husband, but Elspeth’s death has made her realize that she can no longer live constrained by Martin’s many obsessions – his fear of germs and his need to count or perform other rituals to ward off imagined disasters. Julia gravitates to Martin (a semi- but not entirely platonic connection) as Valentina begins spending more time with Robert.

The characters of Her Fearful Symmetry are all deeply flawed – Martin was probably the most sympathetic to me; at least it’s clear that his irrational behavior is truly beyond his control. Robert, too, is mostly blameless – guilty of being a bit weak, but he pays for his sins dearly. The three main female characters – Elspeth, Julia and Valentina – are each monstrously selfish in their turn. Yet each of them retains a humanity that makes it hard to condemn their actions entirely. One of the….I don’t want to say “pleasures”, because honestly it wasn’t always pleasant, but perhaps one of the gratifications of this book is the shifting perspectives I had on each of these women as the story progressed. None of them – even Elspeth, for all that she’s a ghost – remains static.

Martin is in some ways the conscience and soul of Her Fearful Symmetry; he’s a decent man who is at the mercy of chemicals in his brain that compell him to count backwards from 1,000, in Roman numerals, or stockpile drums of bleach for the decontaminating he feels the need to do on a regular basis. Robert is appealing but never really the master of his own fate; he’s at the mercy of his loves and their obsessions and compulsions. Martin may be the only character with OCD, but he’s not the only one to exhibit obsessive and compulsive behavior.

To digress a little, I feel a personal connection to the theme of twin sisters and co-dependence. I’m not a twin, but my mother was (a mirror twin, as well), and though she was very close to her sister, their relationship was fraught with some of the same issues that Julia and Valentina experience (it’s implied that Edie and Elspeth had similar problems, as well, before their estrangement). The need for independence, the feeling of being dominated and of not being allowed one’s own separate identity – I feel like I have a bit of understanding of what that’s like and the tensions it can cause. I’m sure that not all twin relationships are like this, and it may strike some as cliched, but it rang very true for me.

Highgate Cemetery is itself a character in the novel – sprawling, messy, Victorian, final resting place for luminaries such as Karl Marx, George Eliot and Christina Rossetti. Robert is a volunteer for the Friends of Highgate Cemetery, giving tours while working on his thesis on the history of the cemetery. The cemetery’s proximity to Vautravers and Elspeth’s continued post-mortem presence emphasize the theme that the dead are always with us, sometimes to a degree that interferes with our actual living. The characters in Her Fearful Symmetry all have issues with moving on and with separation.

It’s impossible to talk about the ending in any detailed way without giving away major spoilers. I will say that I had some problems with it, and sort of had to process it for a couple of days before being comfortable with it. I’m still not sure that I’m happy about it – but then I wasn’t happy about the ending of The Time-Traveler’s Wife, either. While that ending was tragic, it also felt inevitable and right for the story. My first impression of the ending of Her Fearful Symmetry was that it was not right-it seemed bizarre and downbeat. In retrospect, though, almost all the characters (except, ironically, the ones that you would have expected) end up somehow better off as result of the events that occur. These events are both melodramatic and somewhat macabre, but they end up making sense in the context of the story. I still have a residual resistance to some parts of it, but after all this time I still have a residual resistance to some parts of TTTW; I think it’s just part and parcel of my attachment to the story and the characters.

My grade for Her Fearful Symmetry is an A-; it’s not one of those solid, almost-everything-was-perfect A minuses; rather it’s a messy A- that is a reflection of what was a messy (but ultimately satisfying) reading experience for me.