I was a bit apprehensive about this book. I guess after reading The Iron Duke, I was sure that this book would be a let down. Archimedes Fox was charming but could I buy him as a male lead? Would he be strong enough for a character like Yasmeen? In order to make Fox appealing, would you have to defang Yasmeen (because that would be even worse)? All of these doubts kind of hovered around the periphery of my subconscious as I began to read. Those quickly dissipated as I found myself lost within this rich, textured world that is the Iron Seas. 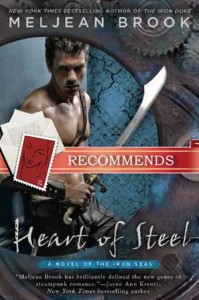 The Iron Seas series is an alternate reality set in the Victorian period.  Much of the world is under the control of the Horde.  The Horde released nanobots in sugar which infected the people who ate sugared items.  Once the nanobots were inside a person, that person was subject to the power of radio towers controlled by the Horde.  These nanobots create a sort of super human allowing humans to heal faster, live longer.  However, they also allowed the Horde to suppress their emotion or drive them into frenzies. In England, the radio towers were destroyed by the Iron Duke and the country is still reeling from the revolution and the aftermath.

Yasmeen is an airship captain who fought with the Iron Duke.  Archimedes Fox is an adventurer, kind of a treasure hunter who finds rare items and sells them for money.  Yasmeen and Archimedes met in the Iron Duke when Archimedes needed transport.  In a fever and not thinking right, Archimedes challenged Yasmeen’s control over her ship and she sent him over the side of the ship into zombies below.  She believes that he has died. Yasmeen isn’t sure whether she’s glad that he hasn’t expired when Archimedes shows up again.

Yasmeen and Fox end up on a journey together to look for Da Vinci’s clockwork army. The man who has hired them to undertake this task understands that it might be a fruitless mission but even if they shouldn’t find the ultimate prize, surely there will be artifacts to be picked up along the way that will make the expedition worthwhile.

Fox tells Yasmeen up front that he is going to fall in love with her. Yasmeen just kind of smirks at his declaration. Fox loves taking risks, the more dangerous the better. Nothing can be more dangerous than being in love with Lady Corsair. What we learn is that Fox was once under the control of a tower for a short time. He was sick and to save him, he was given a blood transfusion from a bugger (a person infected with nanobots). The tower deadened Fox’s feelings and he hated that. Once out of reach of the tower, Fox embraces feelings of all kinds, particularly the extreme ones.  He’s a perfect foil for Yasmeen who is all about control.

Yasmeen’s attachments are few. She has bonds with her crew but she’s been betrayed by men in her past, particularly because the men she has enjoyed have always wanted to exert their control, particularly over her in ways that diminished her in front of her crew which would diminish her reputation and jeopardize her ability to command her ship.  Over the course of the book, you begin to see them both be more balanced. Fox understanding that his pursuit of love as a game is more dangerous than being chase by zombies. Yasmeen recognizing that bonds and tethers don’t always hold you down, but can lift you up and strengthen you.

This story is full of adventure. It’s got great lines. (At one point, Fox bursts in just as Yasmeen is finishing off a bad guy and says “Goddammit. Can’t I save you just once?” or when they are crawling in the dark ““I think God is angry with me,” Archimedes grumbled in French. “My face is all but buried in your delectable ass, and I can’t see to enjoy a moment of it.”)

This is a more charming and funnier and less agnsty read than The Iron Duke but the world building is just as rich, the characters incredibly vibrant, and the love story just as amazing.  I do think of the book as an adventure first and a love story second but I think it is because of Yasmeen’s fear of love.  It takes her a while to acknowledge her feelings for Archimedes which isn’t the norm in romance these days and thus Yasmeen might come off a bit cold.

In answering the questions I had at the beginning, Yasmeen is not defanged but Archimedes is her match.  Not because he can save her.  He probably could but Yasmeen doesn’t need saving in a physical sense but she did need someone like Fox to make her realize the extent of her connections to the people around her and that life could be richer savoring those connections instead of cutting them off.  Yasmeen and Fox could have both lived perfectly acceptable lives  without each other but together, they were happier and that’s a romance story I really appreciate.   A-