And on the One-Thousand-and-Second night, Scheherazade told this story…

By day, Taqla uses her forbidden sorcery to move freely about the city of Damascus in the guise of an old sage. Her true identity known only by her faithful servant woman, Taqla is content with the comfortable, if restrictive, life that keeps her safe from the control of any man. Until she lays eyes on a handsome merchant-traveler. Suddenly her magical disguise doesn’t rest so easily on her shoulders.

When long-time widower, Rafiq, hears that the Amir’s beautiful daughter has been kidnapped by a scheming djinni—and that she will be given in marriage to her rescuer—he seeks the help of “Umar the Wise” to ensure he will be that man. Yet as he and the disguised Taqla set off, he senses that his prickly male companion is hiding something.

In a moment of dire peril, all of Taqla’s secrets are stripped bare—her fears, her sorcery and, worst of all, her love for Rafiq. Yet the princess’s life hangs in the balance, and there is no running away or turning back. Even though passion may yet betray them all…

As the opening sentence says, this could be a story straight out of the Arabian Nights. I can imagine reclining on a divan, eating sugared dates, drinking sherbet and listening with rapt attention as a storyteller spins out the tale of Taqla and Rafiq in their quest to rescue the beautiful Ahleme, daughter of the Amir of Dimashq, from the clutches of the evil djinni Yazid. And what a tale it is with twists and turns and adventures galore. There were times when I honestly had no idea of what would come next and instances when I gnashed my teeth at whatever it was that interrupted me from reading the next page. Had I gotten off my duff and read it last year when I got the book, it would definitely have landed on my top ten list for the year. 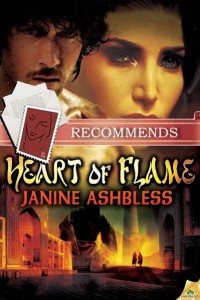 I used to read vampire books and shifter books and angel/demon books (but not zombies, seriously I don’t understand that one) but once the craze kicked in and that’s all people were writing, I got bored and irritated with yet another shifter book or emo/super alpha vampire hero. Frankly, I had basically given up reading any paranormal or fantasy book except for the Temerarie AU series. But here is a book with the lesser used djinni and djinniyah as well as being chock full of different creatures I’d never even heard of – though multiple Google searches bore out their inclusion in folk lore of the areas in which the book is set.

Horse Most Swift, Lion Most Strong, the Bag that Holds the World, the moving picture scroll offered to the Amir which lures his daughter into capture, the initial room Ahleme is kept a prisoner in which turns out to be hung in midair by a web of glass strands – there is something new in almost every chapter to at which to marvel. Taqla is a sorceress but there are definite limits to her powers and abilities – she often relies on instinct to guide her and she can be thwarted by someone who knows how to. Yazid and his sister Zubaida can conjure and whoosh something into or out of existence in the blink of an eye. The scene and image of djinn at play in a lake of molten fire is stunning and terrifying in turns. The single minded mission of an angel setting right what has been done wrong is chilling.

There are great individual scenes such as when Rafiq and Taqla in disguise flee across rooftops and through the back of stores from his enemies in Dimashq. I kept picturing the early bazaar scene from Raiders of the Lost Arc. Or the narrow escape of these two from the ghoulish Pale People or the giant fish that guards the special apple tree. In fact all through the story I kept thinking “this would make a hell of a movie.” The pacing is good with no draggy middle or drawn out end. It’s colorful, imaginative yet based on the places, beings and mythology of the place and time: the House of Wisdom in Baghdad, the nasty little seer Safan inTaysafun, the underwater desert sea, the the fruit from a particular tree. I love how this quest is gently dropped into the story without a lot of fanfare – the tree grew from an apple core that was thrown into the Tigris a very long time ago. My favorite is Senmurw, the Bird of Compassion, who is fantastic. I was actually tearing up a little at what she says to Taqla about love. She makes up for Yaghuth who is particularly awful and I approve of Taqla’s desire to bury that temple with the sands of time. The Pale People were utterly repulsive. The tale of Ardishir and his consort Adhur-Anahid made me shudder. As is her ultimate end – though she seems to have well deserved it.

We actually get two love stories for the price of one here – Taqla and Rafiq and then Yazid and Ahleme. Taqla is older and used to living on her own through her ability to disguise herself as Umar and Zahir which allows her to live without a man in her life. After she tells Rafiq the story of her childhood, he realizes why she’s chosen to avoid marriage as she’s seen firsthand that a man can destroy a woman’s life and that women have less power in this world just because of their physiology. I thought the vision Taqla had of growing old as Safan had also helped contribute to her willingness to change. For his part, Rafiq has also learned a bitter lesson about marriage. He often left his first bride to continue his merchant travels and never bothered to try to either get to know her or learn to love her. He returned to find her dead of a plague and, chastised, only then realized how little he knew her. Each of them has to learn to trust the other and be willing to share a life with another person. It takes their journeying and cooperation in achieving each of the goals to bring this about as they would never have gone beyond surface attraction otherwise. As much as they did, I came to enjoy their bickering – which becomes more playful as the story progresses – and have a vision of them taking verbal shots at each other as they grow old together. And I like that I can see the changes in them slowly taking place over the course of the story instead of BAM! all at once. Though of course neither quite realizes what’s happening at the time.

As for Yazid and Ahleme – here the contrast is between human and djinn, youthful daydreams of love and notions of protecting family honor via virginity vs age old bitterness at the subjugation of a race and determination to eliminate the possibility of future imprisonment of a djinni’s will.
Yazid begins his efforts at conquest with strength and bluster. He’s the big, bad, blue djinni who can create things out of thin air at will, who can become three times the size of a man and shout the house down. He wants what he wants and doesn’t truly care how this will affect an innocent woman. Up to now, Ahleme has been living in a silken prison of the harem in Dimashq so this new prison isn’t far from what she’s used to. She doesn’t have attendants and it takes a while for Yazid to provide her with amusements to pass her time – after he learns the hard way that humans require regular food and water to live – but she has a strong will and won’t bow down or give up her family honor without a fight. It’s not until Yazid does something for her that takes personal effort vs just snapping his fingers that she begins to soften. He listened to her and she realizes she can’t think of a time before when a man has done that. Yazid also doesn’t overpower her when he easily could have. He then tries to turn her innocence against her as he physically woos her. Still she hangs on until she sees the sacrifice he’s willing to make to keep her safe before giving in.

I finished reading with a couple of questions and inconsistencies that popped out at me. The Amir of Dimashq alternately has only one child – Ahleme – or more than one (in the scene where she’s kidnapped at the audience she’s mentioned as the Amir’s eldest daughter and the Amir is said to like to spend time with his children). The Bag that Holds the World seems to be able to hold anything and mention is made of Taqla pulling food out of it during their journey but when they’re forced to spend the night on one of the marsh islands, they have to go hungry because as desert land dwellers they don’t know how to fish. One of the very minor characters mentions the Holy Qur’an yet several times characters drink or are offered wine. But these aren’t things which are deal breakers and none of them impaired my enjoyment of the book.

Is there going to be a sequel? What happens to Ahleme and Yazid? Does Taqla figure out how to control Zubaida or will she get free of the imprisoning spell? Will Taqla and Rafiq travel together and have more adventures? I love it when I finish a book and want more. A-

→ Jayne
Previous article: Flat Out Like a Lizard Drinking and other Australianisms
Next Post: Monday Midday Links: Sourcebooks Launches a Subscription Service and Ebook Store