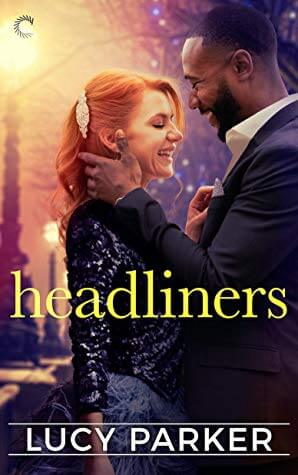 NOTE TO READERS: The following review necessarily contains spoilers for the previous book in the London Celebrities series, The Austen Playbook. If you haven’t read it yet, perhaps best to look away now.

I admit I’m not generally a fan of the enemies-to-lovers trope. It’s not that it’s never worked for me but it has been very hit and miss in the past. Still, I have enjoyed the other books in the London Celebrities series and I decided to trust you. I’m glad I did.

The previous book, The Austen Playbook is more closely linked to Headliners than other books in the series. While I think Headliners *can* be read as a stand alone, I’m not convinced it *should* – it’s best enjoyed after at least reading the previous book. The Austen Playbook is about Freddy Carlton and J. Ford-Griffin (aka “Griff”) and the plotline involves a plagiarised play which is exposed right near the end and causes a massive scandal for the Carlton family in particular and, by association, for Griff (as well as that a relative of his was the true playwright). The story was broken by Nick Davenport, a friend of Griff’s (at least up until that point) and a TV rival of Freddy’s sister, Sabrina.

Also in the previous book, the pair, who had been hosting separate competing evening news shows on rival networks had been advised that a buyer had bought both networks and there was to be an amalgamation. The upshot was that either Nick or Sabrina would end up with a show but not both.

Nick and Sabrina had long had a snarky rivalry going on, with potshots taken at one another whenever possible and when they are directly competing against each other for a job it ramps up further. And, of course, once Nick breaks the plagiarism story things get tremendously worse between the pair.

When Headliners beings, Sabrina is suddenly joined in the naughty corner by Nick, who has been caught on a live mic criticising Lionel Grimes – the network’s owner and as a result of both scandals, neither of them will end up with an evening TV show. However, they have been offered an olive branch: they will co-host Wake Me Up London, the network’s morning TV show for the month before Christmas and, if they improve the ratings and have no further scandals, they might be fortunate enough to be contracted for the show on a permanent basis. Otherwise, they’re both out.

Forced to work together to save both of their careers, Nick and Sabrina become uneasy allies. When it becomes clear that someone is messing with their sets and prompts in order to make them look bad, they have something else to collaborate on.

“…If someone’s messing with us this hard, it’s a lot of effort to go to. Have either of us really pissed someone off enough that they’d—” She stopped. “Hmm.”

Nick’s full attention focused on her. It was almost palpable, when he did that. He had the knack of making whoever he spoke to feel like the only person in the room.

“Never mind,” she said. “I temporarily forgot who I was talking to. That would be a definite yes.”

It was always a sad moment to be reminded of the world’s enormous population of idiots.

All of this forced proximity does it’s job of course and the simmering attraction which has underlied all previous interactions between them bubbles to the surface.

Perhaps the main reason enemies-to-lovers doesn’t work for me (when it doesn’t) is that I have a hard time rooting for a HEA for people I dislike and I dislike meanness. With this trope it is not uncommon for the protagonists, while still in the enemies stage of things, to be really mean to one another and when that happens I check out. In Headliners however, there are some catty and snide comments but nothing truly mean. The biggest obstacle to their HEA is really Nick’s behaviour in breaking the plagiarism story. However, it was not done out of malice. He is, after all a journalist and it was a relevant and important story. If he didn’t break it, someone else would have and at least, his reporting was accurate and did not get into the gutter. Plenty of tabloids did that, as did Sadie Foster, the villain of the piece in both books featuring the Carlton sisters and a recurring (and unpopular – for good reason) character in the series. Added to that, Nick does regret his choice and his apology for his part in the mess is sincere and without excuses.  To be honest, I’m not sure I buy that Sabrina wouldn’t have done the same thing in Nick’s shoes. She said she would not have but… I’m not sure.

In general, Sabrina and Nick deal with each other like professionals and neither will sabotage the other at the cost of their own careers. Having their stars tied to one another means they have to play fair. They either both win or they both lose. This sets up a much kinder enemies-to-lovers experience and, I suppose, gives them practice seeing the other person without a veil of sarcasm between them. It’s not immediate but as they stumble their way towards friendship and more, their behaviour toward one another is never something which creates any real barrier to a HEA and I very much appreciated that.

The narrative sets up a number of tensions, all of which are resolved (naturally) near the end of the book. I held my breath in places and had that cringe-y “oh no!” feeling multiple times because I was so invested in the relationship. I genuinely liked both Sabrina and Nick and didn’t want either of them to be hurt or hurtful.

I loved the way you subverted some of the familiar tropes and how it was all resolved but I won’t say more because those things are best experienced by the reader in-book.

I enjoyed the various family dynamics showcased in the story as well. Nick has a stepbrother and stepfather but thinks of them both without the “step” and he’s very close to his mother (who is amazing). Sabrina is super-close to Freddy and growing close to Griff and Griff’s brother Charlie (can we get a Charlie story please?) but has a strained relationship with her dad, Rupert. Rupert was more focused on the theatre and on Freddy’s career than on anything much Sabrina was doing and she had always felt disconnected from him. When she and Nick get together she finds a safe place to land in a new way, a way she’s never had before. When she needs a hug, Nick will give it to her, no questions asked and no time limit either. I also liked Sabrina’s close friendship with Elise and Akiko, who are part of Sabrina’s (and Freddy’s) found family. The mix works and feels authentic.

I loved, too, the way Nick is so emotionally open and available to those he loves and how that is revealed as he grows closer to Sabrina. He’s really good at meaningful compliments. A+.

“People come into your orbit and you bring out the best in them.” There was an odd note in Nick’s voice, as if he were speaking almost against his will. “You make people feel good about themselves.” Little upward-tilted lines appeared at the corners of his eyes. “Present company excepted.” Slowly, he added, “You make people want to be…better. Happier. You strike a match. Ignite positive change.” His smile now was faint and fleeting. “Sparks.”

The sparkling banter between the main characters definitely put me in mind of my favourite books of the series so far (that would be Act Like It and Pretty Face) and happily, in Headliners, there are lovely (and relevant) cameos from both couples from those first two books.

I spotted the saboteur relatively early on and I did wonder a little about a couple of things (to discuss them would be too spoilerish) but for the most part, Headliners was a wonderful reading experience and a great way to kick off my 2020. Definitely recommend (but read The Austen Playbook first).