REVIEW: Going Under (A Bound by Magick Novel) by Lauren Dane

Your Bound by Magick series is my favorite of your paranormal series. Clan Owen, one of the largest and oldest covens of witches in the United States is recovering from the horror of the Magister, a superpowered enemy that annihilated much of witch-kind, but was beaten back at the end of the last book in the series, Chaos Burning. The fallout of the very public fight against the Magister is that humans have now become aware of the Others who have lived side-by-side with them for centuries. The fight has resulted in a number of human hate groups, led by PURITY, working to marginalize the rights of Others, and perhaps contain the Others in concentration camps. PURITY is sowing fear within the American populace and are working overtime to discredit Others. 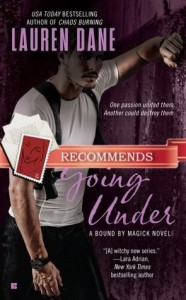 PURITY is “outing” Others publicly and Molly Harper, a PR guru is among those who is publicly named a witch and is summarily forced out of the PR firm that she founded. Hurt and furious, Molly catches a television interview given by Meriel Owen, the head of Clan Owen, and knows that her skills as a public relations executive could benefit all witches.

Molly was raised human, unknowing her Other-ness until it was recognized by one of her teachers, also a witch, when she was in middle school. The woman took her under her wing and introduced her to the local coven in Chicago, where Molly is from. So Molly brings a unique perspective to Clan Owen as she begins her work. She was raised by a human mother and when she arrives in Seattle to begin working, she finds that many are suspicious of her human upbringing. Some feel that she’s not the best person to represent witches because she’s not “witch” enough. But as Molly steps into her role, she finds that it’s much more involved and dangerous than she thought. Acting as Clan Owen’s spokesperson, one who is battling constant misconceptions about her people, she is under intense scrutiny and receives multiple death threats per week. Enter Gage Garrity, the lead Hunter for Clan Owen. Gage is responsible for the safety of Meriel Owen as well as those who work closely with her. He’s immediately drawn to Molly as he provides for her safety. He admires her spine and the fact that she doesn’t back down in the face of prejudice either from inside the Clan or the human hate groups who spew venom at her everywhere she goes. She’s smart, articulate, and funny, and wrapped in a package that he finds quite irresistible. But as Molly public profile raises and she pushes to unite the Others to take uniform action against the hate groups, her life is in jeopardy. Will Gage be able to balance his feelings for Molly with his responsibility to keep her and the leaders of Clan Owen safe from harm?

I loved this book. Particularly, I loved Molly. She’s all the things I love in a heroine: funny, intelligent, perceptive and takes absolutely zero crap off of the very alpha witch who is tasked with her protection. She has no problem getting in Gage’s face when he becomes overprotective. She takes him to task for his high handedness, while still being soft and girly. She’s very aware that her knowledge of magic is limited, and she knows that she must rely on Gage to protect her, which he happily does. But when she feels he’s stepped over the line, she lets him know it. As for Gage, he’s handsome and sweet and extremely alpha in the sense that upon meeting Molly his single goal is to both protect her from harm and keep her as close as possible. They have a really fabulous chemistry, and I truly appreciate that when Molly calls Gage on his BS, he owns it and actually apologizes. I’d classify him as a Caregiving alpha, my very favorite kind.

The sex scenes in the book are spicy and inventive, and I appreciated that Molly was as lusty as Gage, taking initiative when she wanted to. She felt like a very modern heroine, one who I was eager to get to know and who I genuinely liked. I will say that this book absolutely does not stand alone well, and this series is best enjoyed in order. Good thing for readers new to the series that it’s tremendously entertaining and easy to read. As for a long time lover of the series, Going Under was my favorite entry. I can’t wait for the final installment, Wild Darkness. I give Going Under an A-.