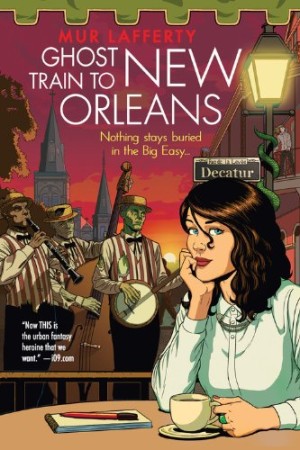 I’ll admit it, I almost didn’t pick Ghost Train to New Orleans up.  I found it on BookBub and figured “well, why not.”  I needed something a little different and New Orleans is one of my most favorite cities in the entire world (beignets and Jackson Square, two of the most wonderful things in the universe).  To say that I was pleasantly surprised is putting it mildly.  To say that I was thrilled and, immediately upon finishing the book, ran to Amazon to find your backlist, would be more appropriate.  Even though this is the second book in a series, it can easily be read as a standalone, though knowledge of the events in book one (The Shambling Guide to New York City) can definitely add a bit more flavor to the reading experience.

Zoe Norris is a mere mortal thrust into the world of coterie – otherwise known as paranormals, AKA:  Things What Go Bump in the Night.  This isn’t something she takes lightly at all, especially not as an editor of the up and coming coterie travel guides put out by the low-budget, but very friendly, Underground Publishing.  As one might imagine, things are a touch tense between coterie (made up of everything from werewolves and water sprites to zombies and old gods) and human beings, though they’re kept in check by Public Works.  What, you didn’t think the water and sewer departments ONLY handled water, sewers and trash, right?  And poor Zoe is the lone mortal in an office filled with things that would happily have her for a snack.  Or a chew toy.  Or something to bounce off of a wall.  They’re kept in check only by the senior editor, her boss.  Oh, and Zoe’s sparkling personality, too.

After the success of the New York guide, Zoe’s tasked with taking her band of merry psychopaths on a brand new train (the aptly named Ghost Train, so titled because of its intangibility to the human eye) down to the haunted-ish city of New Orleans, also voted the place most loved by coterie in the United States.  I mean, come on, what paranormal being WOULDN’T love a city where they can pretty much walk freely among the masses with no one being the wiser?  The only thing considered weird in New Orleans are the pasty faced tourists wearing Bermuda shorts and sandals with black knee socks.  Not only does Zoe have to ride herd on her coworkers, but her zombie-bitten, coterie-unfriendly Public Works boyfriend decides to come along as well.

What could go POSSIBLY wrong with this obviously Brady Bunch-esque picture, right?

Let’s just say that everything goes predictably to hell in a prettily decorated basket, one with a bright red bow.  And it does so in all the best possible ways.  While occasionally Keystone Cops-ish in nature, Zoe’s discoveries about herself, the world around her, and what she –thinks- she knows are highly entertaining and laugh out loud funny.  Of course, there are plenty of moments where the hair on my arms stood up and I wanted to turn all the lights in the house on and ensure I had a priest on speed dial.  The characterizations are delicious and the creepy other-ness of some of the characters is absolutely fabulous.  It’s refreshing to see paranormal characters who don’t necessarily subscribe to what we consider normal human behavior.  Too many times I’ve seen centuries-old characters who act and react like the average, modern-day mortal.  It’s refreshing to see some who are so outright alien that they raise hackles and trigger the lizard brain responses in the reader.

There really wasn’t anything I didn’t absolutely love about the book.  The descriptions of New Orleans made me want to get on a train (though AMTRAK is nowhere NEAR as cool as the Ghost Train) and head down there.  The story made me miss Mardi Gras something fierce.  I wanted to hang out and have some drinks with most of the characters and go with them to closed krewe parties.  I laughed, I cheered – I didn’t cry, really – but I thoroughly and completely enjoyed this book and look forward to the next one.  A-