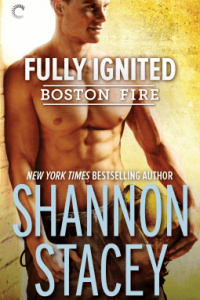 When Jamie Rutherford takes a temporary assignment as lieutenant of Boston Fire’s Engine 59, she doesn’t anticipate any problems. She’s been in the fire service for a long time and, even though she’s fairly new to Boston, she knows how to make any firehouse her home. What she’s not prepared for is her reaction to firefighter Scott Kincaid.

Scott is looking for a wife. It’s been a fun ride as a single guy, but he’s tired of being the third wheel, and nearly losing his brother-in-law finally made him realize just how much he wants a family of his own. When the new guy at the firehouse turns out to be a capable, confident and very attractive woman, his plan is completely derailed.

Hooking up with a fellow firefighter has never been part of Jamie’s plan, but she’s tempted by Scott—even though getting involved with him could tarnish the reputation she’s worked so hard for. And Scott can’t stop thinking about Jamie, despite the fact that she’s his superior and not sticking around. Chemistry can crush the best-laid plans, though, and while Jamie and Scott might not be each other’s future…there’s no resisting the right now.

Book three in the “Boston Fire” series and believe me I warp speed requested this one. We’re back in Boston (well, duh) among the firefighters of E 59 and L 37 plus their families. The shirtless cover models make me think of dawdling around my local fire station in the pervy hope that real firefighters do this and look like this too. One can dream.

Once again the firefighters/friends guy trash talk is funny while the discussions between Scott and his best friend – soon to be brother-in-law – are poignant without getting sappy. The story seems to be well shaded with Boston local color – you have to support the Bruins, driving is a nightmare (especially if it’s a 35 foot fire engine) and you wear only sweats in the middle of winter.

One of the many things I totally agree with Kati on about this series is the realistic world it lives in. All the conflict and resolution feels organic and not like processed “woman/author-made” additives – which we all know are bad for our reading health. It all seems like it’s taking place in a real world with real people and with layers of relationships and issues. There’s a brief catch-up with past characters and where they are now but since this is a tight society of people who see each other on a daily basis – if not of people who are related – it doesn’t feel intrusive.

I like that at least these two are aware of the issues and potential pitfalls of getting together. Jamie is an officer, on temporary duty at this station and a woman in a macho world. Though this station supports her 100%, a brief encounter at the Kincaid bar with an asswipe, plus memories of other misogynistic coworkers in Jamie’s past illustrate that it’s still “everything she does she must do better and any mud tossed around will stick to her but not a man.” Scott is a younger man (woo-hoo!, go Jamie) with a hot head to match his hot body. They have to work together and as his superior officer, Jamie needs to set clear boundaries. They are aware of these and actually consider them before deciding on the pros of the relationship and, as Jamie says, if people are going to wonder and speculate about her sex life, she might as well have one.

Jamie isn’t really looking for more than the casual relationship they start with. Scott on the other hand, has hit that late 20s male nesting stage where he’s ready to get serious about who he dates – going for quality over bar hopping. The other guys joke with him about searching for his perfect “TV wife” and he wants what he sees that his sisters have – someone to build a life with. Jamie discovers that sex with Scott is fun, after sex with Scott is fun and just being with Scott without sex is fun and he feels the same way in reverse.

But there’s a roadblock ahead. Having lost his mother at an early age and after seeing his sister’s firefighter husband badly injured on the job, Scott isn’t sure he can accept a wife and potential mother of his children working this dangerous profession. Jamie, meanwhile, isn’t going to be put in a safety box or give up doing something she loves and is damn good at. The chemistry might be off the charts and everyone around them convinced these two can make it but can they reach a middle ground or is the risk of pain too great?

Obviously things work out but before they do, I enjoyed the whole “We are family” vibe thing of the tight firefighting community. Yay for the believable conflicts of the rank difference, exploration of a woman’s life on this job and delving into the heart of the fear these people and those who love them must deal and come to terms with. Double yay that neither Jamie nor Scott morph into different characters or yield their agency and that not everything is wrapped up in a neat bow. I do hope that there are more books in this series to look forward to. A-

→ Jayne
Previous article: Wednesday News: John Grisham, World Book Day, VLA award, and giving up on a book
Next Post: Thursday News: The one about Apple and the FBI