Is your debut novel literary fiction, women’s fiction, or romance? Its trenchant humor is almost enough to put it in the first category, its focus on a lonely woman’s relationships with her work colleagues and other acquaintances would no doubt prompt many to place it in the second, and yet, there is also a lovely, understated but nonetheless central romance here. 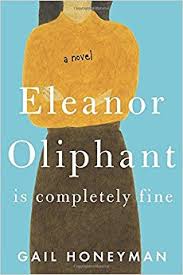 Thirty-year-old Eleanor Oliphant works as a finance clerk at a graphics design company’s office in Glasgow. She’s been there for nine years, and her routine is established. She arrives and leaves at the exact same time, in the same way, does the newspaper crosswords on her lunch break, and makes the same dinner most nights. On Friday evenings she indulges in frozen pizza, Chianti, and two big vodka bottles she drinks over the weekend.

It often feels as if I’m not here, that I’m a figment of my own imagination. There are days when I feel so lightly connected to the earth that the threads that tether me to the planet are gossamer thin, spun sugar. A strong gust of wind could dislodge me completely, and I’d lift off and blow away, like one of those seeds in a dandelion clock.

Eleanor is literal, doesn’t bother with niceties, and has a hard time figuring out social cues. When she wins tickets to a benefit concert and asks an office mate, Billy, to attend with her, she abandons him in the middle of the concert after a performance from a musician whom she is convinced is “the one.” “She’s mental,” Eleanor overhears Billy say the next day.

Eleanor encounters Raymond Gibbons, a new IT guy, after her computer freezes at work. Raymond is poorly dressed, overweight, and a smoker, and Eleanor is repulsed, especially when she compares him to the elegant singer. Eleanor’s cheek is marked by a burn scar, legacy of a fire she survived in childhood, but she intends to make herself over to win the musician’s heart.

On Wednesday nights, Eleanor talks to her mother. Her “Mummy” has a criminal past which led to Eleanor’s placement in foster and later institutional care, and she is now barred in what Eleanor calls “the bad place.” But even from there, she has the power to hurt Eleanor:

“How marvelous! I shall look forward to regular updates on this project of yours, Eleanor,” she said brightly. “You know how much I’d love for you to find someone special. Someone appropriate. All these talks we’ve had, over the years: I’ve always had the impression that you’re missing out, not having someone significant in your life. It’s good you’ve started looking for…your other half. A partner in crime, as it were,” she laughed quietly.

“Well now, you haven’t always been on your own, have you?” She said, her voice sly, quiet. I felt sweat cling to the back of my neck, dampening my hair. “Still, tell yourself whatever you need to get through the night, darling,” she said, laughing. She has a knack for amusing herself, although no one else laughs much in her company. “You can always talk to me, you know. About anything. Or anyone.” She sighed. “I do so love to hear from you, darling…You wouldn’t understand, of course, but the bond between mother and child, it’s…how best to describe it…unbreakable. The two of us are linked forever, you see—same blood in my veins that’s running through yours. You grew inside me, your teeth and your tongue and your cervix are all made from my cells, my genes. Who knows what little surprises I left inside there for you, which codes I set running? Breast cancer? Alzheimer’s? You’ll just have to wait and see. You were fermenting inside me all those months, nice and cozy, Eleanor. However hard you try to walk away from that fact, you can’t, darling, you simply can’t. It isn’t possible to destroy a bond that strong.”

One day, Eleanor runs into Raymond after leaving work. At a crosswalk, they see an old man fall down, and Raymond asks Eleanor to call an ambulance. Raymond rides with the man to the hospital while Eleanor retrieves the shopping bags the man dropped. During a visit to the hospital to return the shopping bags, Eleanor runs into Raymond, who shares the good news that Sammy, the man, is out of his coma, but asleep. Raymond invites her to go out for a pint.

After getting a little buzzed with Raymond, Eleanor heads out on her own to the street where, as she learned via Twitter, the musician lives. Once there, she locates the singer’s apartment building and calls another tenant on the intercom, pretending to have a pizza delivery for the musician. In this way, she gets inside the building and hears her quarry practicing. She then tiptoes away and goes home.

That night, Eleanor takes solace in her Jane Eyre, the story of another strange, unwanted child. The next day, Raymond calls and invites her to visit Sammy with him, so they can answer any questions Sammy might have. When Sammy invites Eleanor to come and visit anytime, and his family members ask her to a party in honor of his recuperation, a new vista opens up for Eleanor, one that includes social occasions, new friendships, and Raymond’s kindness.

Like a flower opening up to sunlight, Eleanor begins to blossom. But casting a shadow over her new life is her dominating mother, Eleanor’s fixation on the musician, and an old yet still painful tragedy. Can Eleanor reach for the help and affection that she clearly needs, and break free from her past?

Eleanor Oliphant is Completely Fine is a tender, touching novel. At first look, Eleanor’s sharpness and initial aloofness might be off-putting, as is her stalker behavior. But the more information about Eleanor is slowly revealed, the more natural it becomes to feel invested in her fate, and to want happiness and healing for her.

Eleanor harbors a great deal of guilt for a past transgression, so she is not even convinced that she deserves to be happy. But despite her prickly, antisocial exterior, she is more generous and courageous than even she knows, and as the novel progresses and she forges new friendships, she starts to differentiate between the judgmental assertions in her mind and the unexpected possibility of love and forgiveness.

There are also many laugh-out-loud moments, such as this one, from Raymond and Eleanor’s hospital visit to Sammy:

“How are you feeling, then, Mr. Thom?” Raymond asked him. “Did you have a good night?”

“Call me Sammy, son—there’s no need to stand on ceremony. I’m doing fine, thanks; I’ll be right as rain in no time. You and your wife here saved my life, though, no two ways about it.”

I felt Raymond shift in his chair and I leaned forward.

He raised his eyebrows, then waggled them at me in quite a disconcerting way. “Sammy,” I said, correcting myself, and he nodded at me.

“I’m afraid I have to clarify a couple of factual inaccuracies,” I said. “Firstly, we did not save your life. Credit for that must go to the Ambulance Service, whose staff, although somewhat brusque, did what was necessary to stabilize your condition whilst they brought you here. The medical team at the hospital, including the anesthetist and the orthopedic surgeon who operated on your hip, alongside the many other health-care professionals who have carried out your postoperative care—it is they who saved you, if anyone did. Raymond and I merely summoned assistance and kept you company until such time as the National Health Service took responsibility.”

“Aye, God bless the NHS, right enough,” said Raymond, interrupting rudely. I gave him one of my sternest looks.

“Furthermore,” I continued, “I should clarify posthaste that Raymond and myself are merely coworkers. We are most certainly not married to one another.” I stared hard at Sammy, making sure that he was in no doubt. Sammy looked at Raymond. Raymond looked at Sammy. There was a silence which, to me, seemed slightly awkward. Raymond sat forward in his chair.

“So, eh, where do you live then, Sammy? What were you up to the other day when you had your accident?” he asked.

Besides the touches of irony, and the novel’s redemptive aspect, another thing I loved in this book was the way it did not shy away from the daily struggles and sadness of life, while at the same time maintaining its hopeful, light and quirky touch.

Even with all that Eleanor had suffered, I felt no pity for her, only sympathy, because of her unflinching courage. She might not be conventionally appealing, but there is nonetheless an admirable core in her.

There was more than one twist to the story that I did not see coming at all, but all the pieces fit together almost seamlessly. I don’t want to say too much about the romance for that reason.

My one caveat is small; I did not really understand why Eleanor’s life took the turn this book portrays at that precise moment. I would have expected her to get closer to people a bit earlier in her life.

Otherwise, it’s hard to capture just how terrific this book is; the whole here is greater than the sum of its parts. Eleanor Oliphant is Completely Fine is a near-magical book, and deserves an A-.