As part of our Georgette Heyer week here, I’ve decided to do lightning reviews of Heyer’s very early series. This series includes Heyer’s first runaway bestseller, the first Regency Romance evah, one of the most well-researched books about Waterloo evah, iconic heroes and the cross-dressing heroines who shoot them (well, not quite), duels, highwaymen, and Beau Brummel. 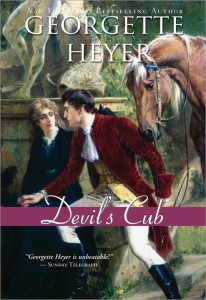 The series “starts” (sort of) with The Black Moth, which I’ve already reviewed here at Dear Author. This is Heyer’s first book, written when she was 19 (and doesn’t that make me feel like a slacker?). It’s set in 1751 so is a Georgian, NOT a Regency romance. It’s notable, in my opinion, mainly for the hero of the secondary romance, but also for the villain, Tracy Belmanoir, Duke of Andover. To the heroine (and, one assumes, to his author), he’s repellent and yet utterly compelling:

It was not what he said that alarmed her, but it was the way in which he said it, and the vague something in the purring, faintly sinister voice that she could not quite define, that made her heart beat unpleasantly fast, and the blood rush to her temples.

Well, four books (one each set in the 17th, 18th, and 15th centuries, and a suppressed contemporary) and five years later, in 1926, Heyer publishes These Old Shades, her first best-selling novel. She takes most of the characters from The Black Moth, gives them different names, and uses The Black Moth as the back story for These Old Shades, the hero of which is Tracy Belmanoir, now Justin Alistair, Duke of Avon. He’s nicknamed “Satanus” and lives up to it. The novel is still Georgian set, and one of the joys of the books is to read Heyer’s enraptured-historian’s descriptions of Avon’s elaborate outfits. Avon buys a fleeing boy off the boy’s brother in the slums of Paris. He does it for his own nefarious purposes — purposes he carries through with utter ruthlessness at the end of the novel. He makes the boy his page, but of course, his page is much more than he seems…

The novel is problematic: class is innate for Heyer. The blood of aristocrats will always tell, as will the blood of peasants, no matter their education or upbringing. But Avon is the ultimate in the depraved hero reluctantly saved by love and the climax of the novel in which all Avon’s machinations come together and he tells the story of Leonie’s background is riveting reading, not least because he’s wearing a gold suit.

But when I read this book at 13, the two line conversation —

— just about killed me. That little hitch in the middle…SO romantic.

Six books (three contemporaries, an 18thC, a 16thC, and an 11thC set book) and six years later, Heyer publishes Devil’s Cub (1932), the story of Avon and Leonie’s son, Dominic, the Marquis of Vidal. He’s 25, wild, and utterly entitled. The book starts with him shooting to death a highwayman and leaving the body in the road. Although he hasn’t had time to become as totally depraved as his father, when he has to flee England after a duel (he leaves because of his father’s displeasure, not because he broke the law), he tries to take with him his latest light o’ love, the middle-class (not demi-monde) Sophy Challoner. Sophy, however, has a determined and entirely respectable sister Mary who refuses to allow her sister to lose her virtue to Vidal. So she swaps herself for Sophy, assuming Vidal would let her go after he discovers the switch. He does not, however, and drags her aboard his yacht, where she defends her honor by shooting him. The rest of the novel is a wild romp through France (as was These Old Shades), with Vidal determined to marry Mary because he’s destroyed her reputation and Mary equally determined not to be married to the man she loves for the wrong reasons.

Devil’s Cub has to be one of my favorite Heyers, because I adore Mary and her relationship with Vidal. When Vidal first insists on marrying Mary, she finds herself daydreaming:

She was so shocked to realise that for a few breathless moments she had forgotten Sophia in a brief vision of herself wedded to his lordship. ‘So that’s the truth, is it?’ said Miss Challoner severely to herself. ‘You are in love with him, and you’ve known it for weeks.’

But it was not a notorious Marquis with whom she had fallen in love; it was with the wild, sulky, unmanageable boy that she saw behind the rake. ‘I could manage him,’ she sighed. ‘Oh, but I could!’

There are no words for how much I love those lines. Stripping away the mask of the dissipated rake and making him a “wild, sulky, unmanageable boy” who needs managing is just…brilliant, in my opinion. And Vidal’s realization that he needs managing, while talking to his cousin, is perfect:

‘You were not very kind to Mary, apparently.’

Juliana ate another morsel of capon. ‘You seem to me to have behaved as though you hated her,’ she remarked.

He said nothing. Juliana peeped at him again. ‘You’re very anxious to get her in your power again, Vidal. But I don’t quite know why you should be, for you meant to marry her only because you had ruined her, and so were obliged to, didn’t you?’

She thought that he was not going to answer, but suddenly he raised his eyes from the contemplation of the dregs of his wine. ‘Because I am obliged to?’ he said. ‘I mean to marry Mary Challoner because I’m devilish sure I can’t live without her.’

The duel that enterprising Mary breaks up, the extended-family conversations we’re privy to, and the conversation between Mary and the unknown gentleman who saves her from herself in France are all absolutely priceless. But this is one book in which Heyer, most uncharacteristically, does not shy away from depicting full on romance at the end, and I adore it for that more than anything else.

Five books (four contemporary mysteries and one final Georgian historical) later, Heyer FINALLY publishes Regency Buck, the first Regency romance. I’ve reviewed this one as well. It’s not directly connected to the previous books until the next book, however. Really, everything I need to say about this book, I said in my other review, so I’ll wait here till you’re done…

Finally, An Infamous Army (1937), tells the story of Charles Audley, the brother of the hero of Regency Buck, and Lady Barbara Childe, granddaughter of Dominic and Mary from Devil’s Cub. The timeline between TOS, DC, and IA don’t quite work out, but it’s good enough. Dominic and Mary, now the Duke and Duchess of Avon, have a cameo in the book, but this book is most famous for the brilliantly researched and amazingly accurate description of the Battle of Waterloo that takes up almost its entire second half. The book is so accurate and so readable that for many years it was used as a set book at Sandhurt, the Royal Military Academy. I will admit, however, that I read it once as a teenager and never again, so I don’t actually have much I can say about it, except: the married brother of the heroine of Regency Buck is embroiled in a flirtation with the heroine of An Infamous Army. Pretty much the only thing I remember of this book besides Bab’s painted toenails and dampened skirts, is Harriet, Peregrine’s wife, lamenting that although they survived Perry’s infatuation, she’ll never fully look up to Perry anymore as her hero, that she sees his faults now in ways that she never had before. And as accurate and realistic as that might be, I found it very melancholy. I don’t feel I can really grade this book. But it needed discussing as part of the series.

As much as we might adore her, Heyer is not an unproblematic author, as we see. But I don’t think anyone can deny the impact she had on the romance genre as we know it today. This series of five books is a mini-catalogue of Heyer’s career in historical romance. She finally settled down into writing Regencies almost exclusively in the 1940s, but these five books show how she got there, not only through her dedication to research, but also in her ability to create amazingly appealing characters.