REVIEW: Drawn Together by Lauren Dane

I am an unabashed fan of your Brown Family series. In fact, Brody Brown (hero of Come Undone) is in my top 10 romance heroes of all time. So, obviously, I was thrilled when I found out that you were going to write a book for Raven Smith, who is a bit of a villain in past Brown family books, particularly Brody’s book. 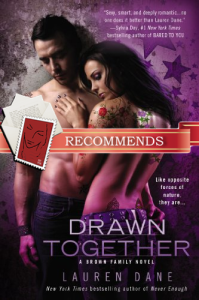 Raven Smith is an incredibly talented tattoo artist. She’s also a free spirit, one who is tied to no one and nothing. Except, not really. While she fled a horrible childhood and an abusive family, she’s built a family among the Brown’s. She’s very close to her best friend, Erin Brown, Brody’s younger sister, and is particularly attached to Erin’s son, Alexander. Through Erin, she’s built close relationships with Elise, Brody’s wife, as well as Gillian, Adrien, the youngest Brown’s wife. She adores their children and wants desperately to be part of their lives. So she finds herself in Seattle and working at Brody’s tattoo parlor often. While she will leave town for short periods of time, she can no longer bear to be away from her family for too long.

One night at an event, she meets Jonah Warner. Jonah is sex on a stick. He’s hot, successful, smart and she’s drawn to him like a moth to a flame. She gathers immediately that Jacob is not a man who likes to be told no. And “no” is practically Raven’s favorite word — she’s contrary by nature. But when he approaches her about the possibility of her designing a tattoo for his back, she agrees to meet him at his house for drinks, and to talk about the design. She realizes even then that the attraction is incendiary and they’ll most likely end up in bed.

Jonah knows from the moment he meets her that he wants Raven. He’s captivated by her beauty, but also by the idea that she’s survived something. He wants to protect her and make her life better. When Raven arrives at his house to discuss the design, sure enough, they end up in bed. And engage in a D/s encounter that is mindblowing for both of them. For Jonah, he’s never had a woman gift him with her submission like Raven did. For Raven, the shock of submitting to Jonah and how thoroughly she enjoyed it is incredibly moving. She’s played around the edges of D/s before, but never given herself over to a man the way she did to Jonah.

But she worries. Jonah is an attorney, upstanding and proper. He has a college aged daughter, and a law practice and a family that is very concerned with image. Raven is what Erin calls, “Slightly Feral”. She says whatever comes to mind. She’s not afraid to lose her temper, she’s been with both men and women and she’s certainly not afraid to say everything that is on her mind. And she damn sure never commits to anyone. It’s why she and Brody never worked out — he wanted more than she could give him. And she has no intention of entering into that kind of a commitment with Jonah. But her attraction to him and the connection she feels with him is compelling her to consider the idea. Jonah, being pushy, asks Raven to be with only him for the time that they are together. While Raven is reluctant and tells him over and over she’s not able to do that, she actually IS doing it. And they build a beautiful relationship of love and respect and eventually, love.

I love this series because it focuses exclusively on the couple building their relationship. While each book has obstacles, they mostly focus on the couple and their relationship and their future together. The book itself has very little conflict in it. There is an occasional disagreement between Jonah and Raven, and Raven does have a difficult past that she hasn’t really dealt with. But the relationship is the absolute focus of the book. I realize for some readers that this might not be enough. But for me, the slow build of the relationship and the mutual respect that the characters have for each other was really beautiful to read. In fact, I’ve re-read the book several times since I read it the first time. As always, the sex scenes are plentiful and creative and build the connection between the characters at a steady pace. This is, other than Come Undone, my favorite installment of the series. It does stand alone, but I’d encourage readers to read the entire series, if you haven’t. It’s a really beautifully written series full of likeable heroines and incredibly strong heroes. My grade for Drawn Together is an A-.