REVIEW: Dead in the Family by Charlaine Harris 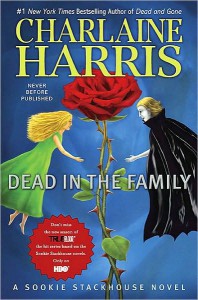 The first time I read Dead in the Family I felt almost hypnotized by the emotional aftermath of the horror Sookie faced in the last book, Dead and Gone. Enthralled by the effects of her trauma and the painfully slow steps she was making toward recovery, I could barely summon my critical faculties to the task of reviewing the book. It took two reads for me to reflect, analyze, and evaluate the book beyond an inchoate awe at what registered to me at the time as a perfectly rendered narrative. My second time through provided some necessary distance, but it did not dim my appreciation of Dead in the Family as one of the most powerful and thematically coherent novels in the series.

First a warning: this review will contain spoilers from Dead and Gone and perhaps some mild spoilers for Dead in the Family. I will do my best to minimize their appearance, but I cannot discuss the current book without revisiting some of the momentous events of the last.

Now that the Fae War is over, the door between realms apparently shut and locked tight, and Sookie's recently discovered fairy great grandfather Niall reigning on the other side, Sookie is just barely beginning to heal from the wounds she suffered at the hands of the insane, tortuous fae couple, Neave and Lochlan. She marks as progress the fact that the parts of her body that were chewed out are now covered over completely with fresh skin, thanks in large part to the substantial amount of vampire blood she has been receiving from Eric, who remains, at least for now, her "husband" according to vampire law. Whether Sookie will ever recognize their relationship in that way is part of her struggle in this book, as she tries to sort out her feelings for him and copes with the reality that Eric did not (could not, he claims) come to rescue her, even as she called and called and called for him during her horrific experience.

Eric, in the meantime, is facing his own challenges, namely with Victor, the new vampire king's eyes and ears in Louisiana, who appears to want more than mere oversight of the territory as Felipe's right hand vamp. Eric, being the most powerful sheriff of the most important territory, is now a target of Victor's simmering ambition. And if that situation was not unsettling enough, he must accommodate an unannounced – and unwanted – visit from a very influential figure from his past.

As the title implies, family is the prominent theme of this book. A clever echo of death in the family, the small change makes a big difference here. Superficially, both Sookie and Jason have suffered from several family deaths over the past few books. The Fae War impacted numerous members of Sookie's circle, both human and supe. But this is a book that also deals with whether and how the dead live on in a family, as vampires, as memories, as legacies, as burdens, etc. And it considers, on many levels, how families are comprised, connected, experienced, remembered, avenged, and honored.

When we first met Sookie Stackhouse, we knew her as she knew herself: a human woman with an extraordinary ability who felt more alone than embraced by her lifelong home of Bon Temps. Her parents were long dead, her grandmother a death she suffered in our first months of acquaintance with her, and her brother a somewhat estranged, unreliable presence. She was close to her boss at Merlotte's, unaware he was a shifter, best friends with a woman who would soon betray her brutally, and smitten with a somewhat taciturn vampire named Bill Compton, who was not only her first love, but her first experience with the supernatural kind. Now, eight books later, Sookie has increased her family in both blood relations and emotional bonds, and her own touch of supernatural heritage connects her to more communities than she ever knew existed. The bittersweet experience of not feeling loved has been replaced by the bittersweet knowledge of how many people now connected to her have died:

Probably that should have made me long for peace above all else.   But instead of turning into the Bon Temps Gandhi, in my heart I held the knowledge that there were plenty of people I wanted dead. I wasn't directly responsible for most of the deaths that were scattered in my wake, but I was haunted by the feeling that none of them would have happened if it weren't for me. In my darkest moments-‘and this was one of them-‘I wondered if my life was worth the price that had been paid for it.

The lighthearted Sookie who always tried to see the best in people and knew a better day was just around the corner has paid her own price for being alive and for the complex relationships she is continually struggling to negotiate and manage. It's not merely a loss of innocence, but rather an acquisition of experience that has shaken the foundations on which her whole world had previously been built:

"Sure, I have. I thought I was going to die for a couple of hours. I hurt like I've never hurt before. And Neave and Lochlan enjoyed it so much. That snapped something inside me. When you and Niall killed them, it was like an answer to the biggest prayer I'd ever prayed. I'm supposed to be a Christian, but most days I don't feel like I can even   presume to say that about myself any longer. I have a lot of mad left over. When I can't sleep, I think about the other people who didn't care how much pain and trouble they caused me. And I think about how good I'd feel if they died.”

Her greatest moments of happiness now often come from Eric, with whom she shares a blood bond, which makes her both relish and distrust her growing attachment to him. However, it is clear that he cares about Sookie, although his new vulnerability extends not only to his feelings for her but to his increasingly precarious safety under Victor's middle management and other complications from his past:

"If they stay until Tuesday, I'm going to see you no matter what they're doing," Eric told me. He sounded a little more like himself. "We'll make love. I feel like buying you a present."

"That sounds like a great night to me," I said, feeling a surge of hope. "I don't need a present, just you. So I'll see you Tuesday, no matter what. That's what you said, right?"

"Okay then, until Tuesday."

"I love you," Eric said in a drained voice. "And you are my wife, in the only way that matters to me."

Across generations, species, centuries, and emotional bonds, the complexity and depth of the relationships Sookie has seem constantly to be shaping and re-shaping her, defining her strength, outlining her vulnerabilities, altering her expectations and desires. Her moral and ethical values are in flux, even as she becomes bolder and more fleshed out as a character and a person. For me, Dead in the Family is the book in which the cost of Sookie's maturation has not yet been set, but like her, we would be foolish to believe that it is not quite high. As one of the many supernatural beings in her circle remarks to her, "Dead things love you… They're pulling on you." At no point in the series has that been clearer than in this book, where Sookie's fuller presence in the world around her has both grounded and shattered her. The genius of this book, in my opinion, is the way it so deftly ties together the sometimes seemingly disconnected pieces of earlier books.

One thing I have noticed about these books is that time is marked off in very specific, discrete pieces, and Dead in the Family is no exception. But here that narrative structure takes on even more significance, because it feels that time is counting down to some ultimate crisis point, and because we can see powerfully the way Sookie's own life is built on so many moments and events that she may not have a part in making but which will require an action or decision or reaction from her. Where some books feel stuffed with action and others feel like virtually nothing occurs, looking back I am already beginning to see how every encounter Sookie has had in these books is shaping both her character and her ultimate fate. And quite honestly, I am a little scared for her.

From the beginning of this series I have been engaged in Sookie's journey toward true independence and fulfillment. Whatever she is moving toward, it will likely be beyond her own imaginings, and for me, as a reader, that is both an exciting and frightening prospect. Where Sookie once yearned for a sweetheart, now she has several males in her circle who desire and care for her. Where she once wanted to be accepted by the people of Bon Temps, she now has deep ties both human and non-human communities, and it seems sometimes she has little peace in her life. She has a cousin she will finally get the chance to know, and a brother who has a very different view of family after his own recent losses. She has a current lover, a good friend who is most likely in love her, and several past lovers who still hold deep feelings for her and will move to protect her when necessary. She has some new friendships and is enjoying the revival of some old friendships. She has fae relatives on both sides of the door to Faery who are still reaching out to her.

In many ways Sookie's life is incredibly rich in family from whom she receives comfort and support. But as Dead in the Family demonstrates with incredible emotional poignancy and thematic cogency, "dead things" are "pulling on" Sookie. And even when their love is a gift, it is a burden and a risk. In some ways I feel that this series is the same, but like Sookie, I cannot bring myself to give up. A-

This is a hardcover published by ACE, a division of Penguin. Penguin has not come to an agreement with Amazon and therefore there is no Kindle version. Pricing is set by the publisher for the digital book.

→ Janet
Previous article: REVIEW: Beyond the Shadows by Jess Granger
Next Post: Dear Author Recommends for May