Writing this review has taken me a long time.   Usually, I can write a review within a few days, because my feelings on the overall quality of the book are clear.   However, there is always the occasional read that requires a long stewing before I can rightly form a review.   Dangerous Neighbors has been one of those books.   The problem has not been on the quality of the book, so much as how far the quality goes.   How much can beautiful writing make up for some faults in the story?   I believe that I have finally come to a conclusion. 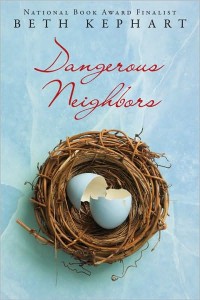 Twins Katherine and Anna are close.   They are the best of friends and always look out for each other.   Their mother is a staunch feminist which is a little scandalous for the late 1800’s.   Living in a quirky household is nothing new to them, and they’ve managed to survive with their wit and close friendship.   Katherine has always looked out for Anna, and it’s never been hard.

Meeting a local baker changes everything.   Anna is smitten and no longer has time for Katherine.   Suddenly, Katherine has to deal with sharing her sister, and she isn’t too happy about it.

A year later, Katherine is at the Centennial Fair in Philadelphia without Anna.   Without anyone.   She thinks back to the year before and the stormy relationship she had with Anna after she met the young baker.   She misses her sister more than anything.   Dangerous Neighbors reflects on the loss of a loved one, and on the tight bond between two sisters.

Rating a book like this with more literary characters is hard.   Very hard.   Literary characters always have deep flaws, more often than not make liking them very difficult.   The writing style is also more to chew on than in a lot of young-adult books right now and it makes you think.

Katherine is a prime example of how a story is can be limited in a third person narration yet encompassing. The long, painful focuses on Anna and her death will cause pangs of depression and sorrow within the reader.   Emotional investment is at an all time high with the voice used in Dangerous Neighbors.   Dramatic and intensive, Katherine is a character that we cannot ignore.   She’s intelligent and protective, and despite her bravado, a very quiet character; an opposite of her sister, Anna.

While it is not unusual to see twins that are the opposites of each other in stories, it is unusual to see the idea as original.   Anna felt just as real as Katherine did, and I love that her adventurous nature had its own faults and appealing factors to it.   Her romance with the baker was quite exciting, and I love the wedge it shoves between the girls.   The reality that it brings to Katherine is great, and allows Anna to become more of her own person.   Pre-baker, the narrative gives off the distinct impression that the two girls are more one of the same.   With the baker and Anna’s rebelliousness, we come to realize that these are very different characters.

Secondary characters are few and far between.   Dangerous Neighbors is a pretty short work, and focuses mainly on the twins and Katherine’s feelings of abandonment and guilt over Anna’s death.   Other characters take a back seat to these dealings, but they were still very interesting.   Anna and Katherine’s mom was one that I especially liked, as well as the boy that Katherine randomly sees throughout the story.   While each character felt interesting and vital, I was disappointed with their overall development.   Outside of Katherine and Anna, the other characters barely exist.   This serves a literary purpose, but it still doesn’t work in the book’s favor.

Your writing style is one completely original to the world of young-adult books, and it’s beautiful.   So beautiful.   I read this book very slowly just to absorb the meaning of everything.   Every passage flowed and ebbed with emotion and depth.   This is the type of book that proves that the young-adult genre is more than just a commercial one. One part early on in the book, where Katherine contemplates suicide, is a perfect example of your writing style.

The others climb high.   Their voices disappear into the narrow channel above.   Katherine bends down to retie her boots with excruciating deliberation, until at last she is alone with her plan – alone in this round room with its unlocked windows., with Paris below and the balconies above.   She moves with the utmost care – one leg through the nearest window, and then the other, both hands steady on the wooden frame.   A splinter catches on one finger.   Her feet adjust to the mathematics of the roof.   She turns to face the sky.   Now with her heels dug in, she stands unnoticed on the slanting round of the roof, loosening the skirts around her knees with one hand and then the other, chewing at the splinter, which is not so deep.   It waggles loose.   She spits it out.   She bleeds a little bit.

It is her day.   She has only to shimmy herself down the slant of the roof towards the lower parapet, then only to stand on the parapet and fly.   Only to wait until five o’clock, when the final crowd of the day will surge onto the elevator and sink toward the bowels of Paris.

Passages like that made me want to savor this book forever.   The plotting is unusual with the flashback and present day style, but it works really well for the book and allows the reader to really get to know and see the changes in Katherine’s character.

Other than the sparse secondary characters, Dangerous Neighbors is a wonderful book with a vivid protagonist and lyrical prose that will capture the heart of any reader.   For the duration of 192 pages, the reader is signed on to an unforgettable journey set in the heart of Philadelphia, during a fair that changed the lives of many, including a girl named Katherine.   You are a new favorite author, Beth Kephart, and that says a lot.   Now go and write more books.   A-

→ John
Previous article: REVIEW: The Boss’s Proposal by Kristin Hardy
Next Post: REVIEW: You Only Love Once by Caroline Linden