REVIEW: Come Unto These Yellow Sands, by Josh Lanyon

You are so well known for your series that some readers may be less familiar with your stand-alone books. I’ve done my part to avoid this possibility, and I was delighted to see that you were releasing a new stand-alone novel. Come Unto These Yellow Sands, like last year’s Fair Game, features an academic protagonist/narrator, a pre-existing relationship between the main characters, and a murder to solve, but those are the only obvious similarities. The novel is nominally a whodunit, but it will appeal even more to readers who look for well developed characters, settings, and relationships. 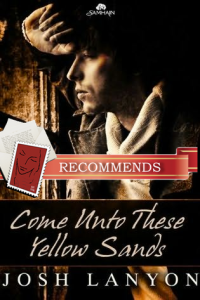 The story is set in Maine, where Sebastian S. Swift is a professor of English, director of Casco Bay College’s MFA program, recovering addict, and erstwhile enfant terrible of the poetry world. Son of two brilliant and well-known poets, he made his own name for himself with his first volume of poetry, which was published when he was seventeen. He also made a name for himself in the tabloids and became a drug addict, nevertheless managing to publish a second well-received volume of poetry along the way. After several failed attempts, Swift has finally become drug-free, and over the last six years he has established a life which brings him contentment, if not happiness, and a measure of peace. This life includes a long-term, mostly satisfying, and studiously uncommitted relationship with the local Chief of Police, Max Prescott.

Swift’s carefully uninteresting life is jolted by a series of events. His favorite student, Tad Corelli, shows up bruised and bloody at Swift’s office and asks for a leave from the program, refusing to tell Swift what happened.  That same night Corelli’s father is found murdered, and Max immediately identifies Tad as the most likely suspect. The next day, as Swift tries to negotiate his competing loyalties to Max and Tad, his old agent calls him to try and convince him to publish some long-suppressed poems, which Swift had written after the death of his father and which comprised his cocaine-fueled reaction to that trauma. As Swift attempts to locate Tad, who has vanished, he finds himself reliving the dark period of his addiction, jeopardizing his college position, and angering Max.

The central conceit of the plot is that Swift is working to uncover the mystery of Corelli’s death even though he hates mystery stories, because he sees it as the only way he can exonerate Tad. This brings him into direct conflict with Max, and it also reveals the extent to which Swift’s seemingly secure academic existence is threatened by key players’ animosity toward him, primarily because of his homosexuality. Swift realizes that he is tolerated because of the fame he brings the college, but that fame depends on his continued visibility as a poet, and he is afraid that his poetic imagination is inextricably tied to his addiction. Analogously, Swift’s concern for Tad’s well-being endangers his relationship with Max, and he is afraid he will be unable to prove Tad’s innocence without destroying Max’s trust in him.

As the story unfolds, it becomes more apparent that Swift’s unrelenting focus on containing his addiction engenders both a self-centered myopia about the world around him and an inability to put the other parts of his life in perspective. He perceives both his relationship and his career situation as being far less complicated and ambiguous than they are. It is only when he starts to lose control and is convinced that he is going to lapse back into drug use that he begins to see his world and the people in it in a more balanced way. Watching Swift realize what he has been missing and try to come to terms with these issues is one of the most rewarding aspects of the novel.

The romance storyline is subtly written but emotionally gripping. Swift and Max’s first scene, early in the book, sets the tone of the relationship as the former perceives it. They are comfortable with each other and both seem accepting of the limitations they have set, but we quickly realize that Swift would like more. But as in other parts of his life, he doesn’t know how to achieve it and he doesn’t think Max wants the same thing, which makes him unwilling to rock the boat. When he risks their comfortable equilibrium by investigating Tad’s disappearance, he realizes how much he has counted on their supposedly no-strings attachment. Being honest with Max is terrifying for Swift but also necessary, both to repair what has been damaged and to move forward.

Max’s characterization is less minutely detailed, and his character is revealed over the course of the story. If Swift is all nervous brilliance and self-doubt, Max is his opposite: calm, honest, comfortable with himself, and possessed of a level of stability that would inspire envy in a rock. When Swift asks for his help while they are estranged, Max immediately offers it, and once the crisis has been addressed (in a beautifully written sequence), he explains why in his straightforward way:

With one—maybe one and a half—notable exceptions, they had always been honest with each other.

“I thought you might see me through whatever last night was and then suggest we take a break for a while. Put a safe distance between us.”

Max grunted. “Did you see any other possibilities?”

“I didn’t let myself look for them.”

“Why are you doing this? You said it yourself last night. If anything I’ve—our friendship has been a bigger hassle in the last six days than in all the last six years.”

“That’s sure as hell true.” Max’s grin was wry. “I guess…maybe I like to be needed.”

If that were true, he’d have to travel a distance to find anyone needier than Swift. It was a bitter thought.

Max’s smile faded. He actually seemed to lose some of his normal healthy color as he said, “Maybe it turns out that I love you.”

As in so many of your novels, the context and setting are extremely well done. The academic environment rings so true to me, especially the portraits of the administration and staff. And when Swift goes to the island cottage left to him by his father, you effortlessly transport me to that island in Maine:

Swift turned off the main road onto a loose gravel drive which led to the bungalow. He could see the rooftop and chimney through the flame-colored trees. By now Tad would know he was coming. He’d be able to hear the car engine from a mile away. The island was very quiet, as Swift knew from his own experience, and this time of year the only sounds to break the silence were the rush of waves, the wind through the trees, the cries of gulls.

At last the bungalow swung into view. It was a 1920s bungalow, gray and white clapboard with a screened porch overlooking the bay.

Swift parked in the circle of shell and pebbles, and went up the stairs. The scent of autumn and burning leaves sharpened the damp air.

The process of discovering Corelli’s murderer structures the course of the book, and as a lover of mysteries I found it enjoyable to follow the leads with Swift, but I didn’t think there were enough clues for the reader to be able to deduce who the killer was until the reveal. Of course, I’m terrible at figuring out whodunit, so take that criticism with a grain of salt. And it’s almost beside the point because the real focus of the story is Swift, how he comes to terms with aspects of his past that have been suppressed rather than resolved, and how that process leads him toward a more fulfilling romance with Max.

It is difficult to write a character whose addiction is convincing and have the reader believe both in his redemption and an HEA for the romance, but you pull it off in this novel.  Swift is a fascinating character; his weaknesses and his strengths seem so intertwined, as if they flow from the same personality traits. When I reached the end of the book it was hard to let him go, but I’m confident that his future will offer him not just contentment but happiness. Grade A-