I first heard of your book while linkhopping across various reader blogs. I can’t tell you exactly where I learned of Cold Magic but the description stuck with me: an Afro-Celtic post-Roman icepunk Regency novel with airships, Phoenician spies, and the intelligent descendants of troodons. I later discovered this description was taken from the author interview included in the back of the book but in terms of hooking me, it was very effective! That was such a mishmash of different ideas and concepts, I had no idea how they could possibly work together. I had to see it for myself, and I’m so glad I did.

The history of the world begins in ice, and it will end in ice.

So begins Cold Magic, the first novel in your Spiritwalker trilogy. Set in an alternate Europe populated by the various unions of Celtic tribe and West African diaspora formed after the fall of the Roman Empire, Cold Magic tells the story of Catherine Hassi Barahal, a child of Kena’ani (aka Phoenician) merchants. Orphaned as a baby when her parents died during a river crossing, Catherine was raised by her aunt and uncle, along with their own daughter, her cousin, Beatrice. 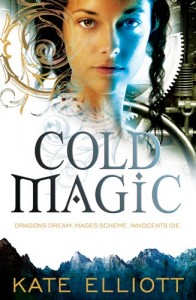 Though both girls are close in age, Catherine is the elder cousin and she is nearing her legal majority. This is a key point because at some point in the past, the Hassi Barahal family made an enemy of the powerful Four Moons mage House and to escape destruction, they forged a contract. In that contract, they promised Four Moons House the eldest Barahal daughter and they could claim ownership of her at any point before her legal majority. They thought they’d somehow managed to escape that contract unscathed but unfortunately, it was not meant to be.

Catherine is then taken from her family and forced into married to Andevai, the most powerful cold mage of his generation. What follows is a journey across cities, the countryside, even the spirit world, as Catherine struggles to make the best of her situation while trying to discern the details of the contract that landed her in this mess, the truth behind her parents’ deaths, and her destined role in the impending conflict between magic and technology.

I haven’t been this excited about a traditional fantasy novel since Kushiel’s Dart. And while this is a very different book from that one, it does something similar by taking familiar concepts and putting a new spin on them. Here, it is the impoverished upper class family, the orphan raised to be a companion and replacement for the true daughter, and the forced marriage. I think anyone who’s read a few Regency novels will recognize these elements.

I also really liked the concept of this alternate Europe. Not only did Rome and Carthage fight each other to a standstill, instead of European colonialism, a salt plague (and more than a few ravenous ghouls who climbed out of those plagued salt mines) led to the mass exodus of West African tribes from the Empire of Mali across the Mediterranean Sea (on Phoenician ships, no less) to Europe where they intermingled with the Celtic tribes that had established a sort of feudal system after Rome’s fall. In a genre where the default is often assumed to be that of white European, you cannot make that assumption here and I found that incredibly refreshing. I loved how equal weight was given to the Celtic and Mande traditions, and how in this world, both cultures are respected.

Catherine is a wonderful heroine. She is competent and pragmatic, and I particularly appreciated her loyalty to her family. Despite the startling turn of events, she didn’t question the terms and accepted the price of the contract. Even at the novel’s turning point, when the truth of Catherine’s heritage is revealed, she doesn’t bear any true malice against her family and the injustice they’ve dealt her. Her first thought, instead, is that of Beatrice.

Can I also say that I adored the relationship between Catherine and Beatrice? It’s wonderful to see cousins-raised-as-sisters have a genuinely affectionate relationship — not only as family but also as friends. They aren’t the same. In fact, they’re the classic trope of being opposites: Catherine is nosy and tomboyish while Beatrice is charmingly beautiful. In another story, we wouldn’t be surprised to discover Beatrice is a spoiled brat who torments Catherine or the like. But that doesn’t happen here.

As for the romance, I wasn’t quite sure what to expect of the forced marriage between Catherine and Andevai. I’m ambivalent on this trope so I like to think I approached that aspect with an open mind. I was very surprised. It was nice to see Catherine and Andevai discover each other’s strengths and weaknesses, especially since Andevai was as much a victim of the contract as Catherine. It’s not a major aspect of the plot but it’s there.

This is the first installment of a trilogy, and like many fantasy trilogies, the story is not complete in this single volume. I did think the book ended at a good stopping point, but I definitely see why some readers might feel like they were left hanging. Speaking for myself, I’m very impatient for the next book but that’s because I want to see what comes next for Catherine, Beatrice, and Andevai.

Cold Magic is touted as Regency icepunk although if it’s set in 1837, shouldn’t it be early Victorian icepunk? Regardless, I hesitate to call this steampunk although I can see why that label could also fit. I actually think gaslight on the verge of becoming steampunk is more accurate. While the novel is very much devoted to Catherine’s story, we are treated to rising tensions in the background between the established order of the cold mages and the impending Industrial Revolution which promises flying dirigibles and other technological wonders. I suspect these will come to the forefront in the sequels.

In the end, I’m pleasantly surprised to discover that description which introduced me to Cold Magic was accurate. I understand that it could put off potential readers because the various elements seem so discordant but I thought you made them work. I felt like you packed a lot of stuff into 500+ pages, and it resulted in something nuanced and layered. I like that in my fantasy, and I’m thrilled to have discovered you. So much so that I’m going to look up your backlist. A-