I had not heard of your book before one of our posters mentioned it in glowing terms. In a way that managed to catch my attention yet not sound like fawning praise, she described it and urged people to try it. I bought it but then set it aside as I had just finished reading another book featuring Nazis and felt I could use a break. I knew ahead of time that not everything is as it seems but I deliberately didn’t read any other reviews or details about the plot. This turned out to be a wise decision as the full impact of the book could hit me as I read it. And hit me it did.

I won’t attempt a run down on the plot so as not to inadvertently give anything away. Instead I’ll just steal this from Amazon:

“Oct. 11th, 1943—A British spy plane crashes in Nazi-occupied France. Its pilot and passenger are best friends. One of the girls has a chance at survival. The other has lost the game before it’s barely begun.

When “Verity” is arrested by the Gestapo, she’s sure she doesn’t stand a chance. As a secret agent captured in enemy territory, she’s living a spy’s worst nightmare. Her Nazi interrogators give her a simple choice: reveal her mission or face a grisly execution.

As she intricately weaves her confession, Verity uncovers her past, how she became friends with the pilot Maddie, and why she left Maddie in the wrecked fuselage of their plane. On each new scrap of paper, Verity battles for her life, confronting her views on courage and failure and her desperate hope to make it home. But will trading her secrets be enough to save her from the enemy?” 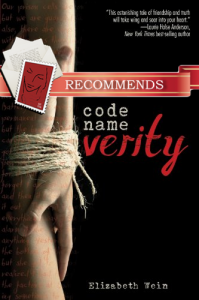 In your (love the “chapter” headers used in the book) Author’s Debriefing, you mention that it pains you to admit that [Verity] and Maddie never existed but are only products of your imagination. I hate it too because these are two unforgettable characters. They’re so real. They’re multi-dimensional, richly textured and so damn real. If I’m pressed to mention a flaw it would be that Maddie’s speech doesn’t sound very Manchestarian (is that the right adjective?). But beyond that and a few small niggles about the mission and some people in Ormaie…..honestly, I couldn’t come up with much more. Maybe tomorrow after I’ve come down from the emotional rush of the book but not right now.

This is a book that merits keeping on with it. At first I wasn’t too sure about a book of one character narrating the whole story and that character seemingly a weak one at that. After all, she’s the protagonist. She’s supposed to be invulnerable to anything the Gestapo throws at her, right? She’s also not even narrating in first person but rather writing about herself in third person in broken intervals mixed with a few instances of what was going on in between her treasonous confessions. Could this really be sustained for the entire book and did I want to stick it out? I needn’t have worried because pretty soon I was as caught up in what she’d write next as the Germans appeared to be. I was also deathly afraid for her even as I was in awe of her sang froid and black humor. It was like watching someone literally laugh in the face of death then spit in its eye.

Knowing a character is in the hands of the Gestapo who want information from her and is also close enough to an interrogation room to hear how they attempt to get details from other prisoners pretty much puts the kibosh on this being a feel good book. Still I’d only rate it about a 6.5 on the squeam-o-meter. I think you made the right choice in that most of what happened is mentioned obliquely in past tense or merely hinted at thus leaving the reader free to mentally fill in the blanks – or not – as wanted. There’s no way to get around the fact that torture occurs in the story, to Verity as well as to others, but the way you handle it is enough for the reality to be understood without making it too much for readers to stomach.

I wavered back and forth, trying to guess how the book would end. Was there actually a chance for Verity to make it out alive? Perhaps she deliberately got herself caught in order to get inside the prison? Maybe she had a plan up her sleeve that would be every bit as resourceful as she’d shown herself to be throughout the story. After all, surviving for 6 weeks in a Gestapo prison was no mean feat. The resolution of her imprisonment didn’t completely take me by surprise. But it still hit me like a hammer. I felt drained and disbelieving and yet totally understanding of the way it comes about and the why behind it. As with another character, it would also have filled me with a white hot hatred and need for revenge. Which is neatly accomplished by seeing that Verity’s original mission is carried out.

“Code Name Verity” is unlike any book I’ve ever read before. A good book is one I enjoy as I’m reading it. A great book is one that will stick with me and, in ways, haunt me. This is a great book. A-