I’m not sure how I came to know about this novel; probably from the blog Two Dudes in An Attic, who participated in a multi-blog read of the book and put it on their Best of 2014 list. I was intrigued by the combination of murder mystery and colonialism-oriented SFF, as well as the intersection of Czarist Russia and Mughal India. I didn’t see any Mughal India in it, but there are definitely South Asian names, characters with South Asian attributes, and appropriate cultural allusions, including tea, which seems to be ever so popular in colonialism-oriented SFF these days. (Someone needs to tell authors that the French, Dutch, and Belgians also had colonies, never mind the Spanish, so coffee obsessions work too.) 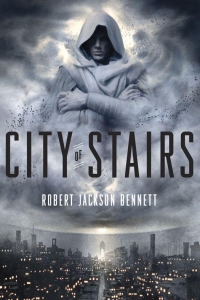 The book opens in a courtroom in the Continent’s capital city of Bulikov, but instead of drama and high oratory we have bored judges and surly onlookers. It is a great reminder of the quotidian aspects of colonial rule, the way choices are constrained by rulers who find mundane ways of undermining their subjects’ culture. Into this scene comes the news that the one absent judge has been murdered, and that sets the actual plot of the book in motion and provides the rationale for the main character to appear. Shara Thivani is sent by the Saypuri government to investigate the murder, and the first third or so of the book follows the lines of a conventional murder mystery, albeit one set in a culture whose world collapsed when their divinities were killed.

The backstory of the novel is that the Continent and its Divinities ruled Saypur (which was never blessed with a Divine presence) for hundreds of years, until Saypur rose up in revolt behind a leader who was able to kill the Divinities. Their absence shattered the structure of the Continent, especially Bulikov, which is war-damaged and oddly incomplete in a way that no rebuilding can repair. Saypur’s 75 years of dominance aren’t nearly enough to wipe out either side’s memories of the centuries when the shoe was on the other foot, so both societies carry the arrogance and resentments of dominance and subordination. It’s a fascinating twist on the usual depictions of colonialism, one I don’t remember seeing before (I’ve seen hybridity explored, but not a flip that gives both sides parallel experiences). The rest of the world-building is great too, with each Divinity’s physical and ideological domain developed in thorough, complex ways.

I could spend paragraphs talking about the way religion is depicted. I especially appreciated that the author gives us portrayals of several different religious traditions in the novel; each Divinity has a following and a discrete territorial hegemony, but they come together in Bulikov, for good and ill. The different doctrines reflect real-world religions, but they aren’t one-for-one mappings by any means.

The novel is written in 3rd present, which I’ve not come across very often. Although I’m not usually a fan of present tense, I didn’t notice until well into the book. It’s an interesting choice that worked for me, perhaps because it makes characters in an unfamiliar environment feel more immediate, nearer to me as I’m reading. In addition, flashbacks and recollections are written in 3rd past, so there is a clear break between then and now. It sounds self-conscious when I write it down, but it didn’t read that way to me at all.

There’s occasionally some info-dumping, but for the most part the reader can trust the author to speak through the characters and the story itself:

She watches the crumbling arches, the leaning, bulky vaults, the tattered spires and the winding streets. She watches the faded tracery on the building facades, the patchwork of tiles on the sagging domes, the soot-stained lunettes, and the warped, cracked windows. She watches the people—short, rag-wrapped, malnourished—stumbling through oblong portals and porticoes, beggars in a city of spectral wonders. She sees everything she expected to see, yet all these dreary ruins set her mind alight, wondering what they could have been like seventy, eighty, ninety years ago.

Bulikov. City of Walls. Most Holy Mount. Seat of the World. The City of Stairs.

She’d never figured that last one out. Walls and mounts and seats of the world—that’s something to brag about. But stairs? Why stairs?

Yet now Ashara—or just Shara, usually—finally sees. The stairs lead everywhere, nowhere: there are huge mountains of stairs, suddenly rising out of the curb to slash up the hillsides; then there will be sets of uneven stairs that wind down the slope like trickling creeks; and sometimes the stairs materialize before you like falls on whitewater rapids, and you see a huge vista crack open mere yards ahead.…

The name must be a new one. This could have only happened after the War. When everything … broke.

Shara is a brilliant spy and descendant of the Kaj, the Saypuri who killed the Divinities and liberated Saypur. She has been away from Saypur for years, supposedly because of a botched investigation, and despite her successes is never called home. She was close to the murdered historian/judge, sharing his fascination with Continental history, and her investigation soon leads her to ask all kinds of questions about the past, which doesn’t seem to be as buried as people on either side would like to think. In addition, she encounters a former lover, a Continental whom she wants to trust but has very little reason to.

Shara may be intelligent and powerful, but she’s neither kickass nor a Mary Sue. Everyone she meets doesn’t love her and she both acknowledges her weaknesses and takes confidence from her strengths. The other characters are similarly nuanced and include Mulaghesh, a female Saypuri officer-turned bureaucrat; Shara’s Auntie Vinya, an influential Minister; Shara’s Viking-like henchman, Sigrud; and the aforementioned Vohannes, Shara’s college flame, who happens to be one of Bulikov’s city leaders and most important businessmen.

Once the murder investigations open up into a larger exploration of strange and suspicious happenings in Bulikov, the novel becomes more conventionally fantasy-like and the pace intensifies. I enjoyed the slow burn of the first half, but for those who like more action and might be frustrated in the early going, hang in there because the backstories which are developed early on really start to pay off. There are monsters and battles, and the hulking Sigrud goes from scary and monosyllabic to sympathetic and interesting.

There’s no clear romantic storyline, apart from Shara and Vohannes’ old relationship and their residual, unresolved feelings for each other, but the ending is relatively optimistic, and I found the non-romantic relationships very satisfying. It was really satisfying to read a book with a narrator who is a small, not-obviously-attractive, dark-skinned woman in her 30s, and Sigrud turns the romance-genre barbarian Viking stereotype on its head. He’s not gorgeous, just frightening, and while I found him immensely appealing by the end, it was because of the way I got to know him.

There was one character whose arc fell into a very common stereotype, which was disappointing. It’s a spoiler, so don’t read if you don’t want to know key aspects of the last quarter of the novel.

Vohannes is closeted gay or bi (I’m guessing gay, but it’s never specified). He has deteriorated both physically and psychologically since Shara last saw him. They still have feelings for each other, but since this isn’t a romance I assumed from other aspects of the story that they wouldn’t reconcile. Vohannes winds up giving his life in a way that’s instrumental to the good guys’ eventual victory, which made sense for the story. But to have the only clearly non-straight character wind up dead was frustrating. I don’t know that the other characters are all straight; their sexuality isn’t revealed clearly in the story. But his is. If the rest of the characterizations hadn’t been so strong, this stereotypical arc might not have stood out to me.

It turns out that City of Stairs is the first of a planned trilogy, with the second installment coming out in January 2016. Its central character will be Mulaghesh, the (female) officer-bureaucrat whom we meet on the first page and whom I liked a lot. This is absolutely a world I want to spend more time in, so I’m looking forward to City of Blades. Grade: A-