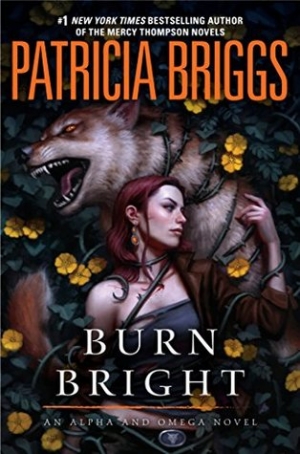 It’s a new year and there’s a new Patricia Briggs book. Something is still right in the world.

Burn Bright is an Alpha & Omega book, featuring Charles and Anna Cornick. It is in the same universe as your Mercy Thompson books and the world building is so dense at this point, I think it is necessary to have read both series to fully understand the importance of what’s happening. I see this as a feature not a bug by the way. While last year’s Mercy book wasn’t a roaring success for me, I did still enjoy it and all of the other books in both series have been stellar.

For those who haven’t read all the books yet  – series spoilers follow so be warned.

Burn Bright takes place about a week after the main action of Silence Fallen. Bran has decided to go to Africa to visit Samuel and his mate rather than come home to Aspen Creek, leaving the pack to remain under Charles’s protection and authority in his absence. Charles isn’t particularly happy about this. He and Anna are staying in Bran’s and Leah’s house for the duration and the extra interactions and responsibilities wear on the both of them.

The action kicks off immediately, with a wildling urgently needing help. (Wildlings are the more troubled wolves in Bran’s care who live isolated from all but a select few of the pack because of their precarious mental state, brought about, usually, by great age). Charles and Anna go up the mountain to answer the call, and find Hester, a very old wolf, trapped in a cage made of iron and silver and guarded by paramilitary-type men. From there, the story moves from a rescue attempt to a realisation that Hester was only caught because there is a traitor in the pack’s midst. Charles and Anna, with assists from Asil, Leah and Sage, investigate and come up against a powerful magic which, if not stopped, risks everything for Charles, for Anna and for the pack.

Most of the book takes place over two days. Burn Bright is action and tension packed. I kept finding excuses to read because I was so invested in the story. As is often the case with your books, I also read over bits, trying to draw out the pleasure of the book and make it last. I still read it in a weekend. There is also time for some romance between Charles and Anna. They have a strong and stable relationship but there remain some sore spots they have to navigate, challenges ahead of them and traumas behind them that still cause pain. I find almost every interaction Charles and Anna have to be romantic in some way – even when they are fighting a monster there is either implicit or explicit acknowledgement of who they are to each other so it is always at the forefront of my mind when I read.

Charles is an alpha – though not the alpha (except temporarily) of the Marrok’s pack. Anna is omega. She sits outside of pack hierarchy, with unique powers and abilities, which she uses both to soothe and to ruffle fur from time to time. I have always admired in the Mercy books that Adam and Mercy are both alpha and you make that dynamic work. Similarly, I love how Charles doesn’t attempt to dominate Anna. He never has. He is sensitive to her vulnerabilities of course. They met when she had been brutalised and abused after being Changed against her will but he also sees and values her strengths. Charles is clear-eyed about himself as well. He recognises his instincts aren’t always what Anna wants or needs.

He knew it was not his job to make her smaller, safer. It was his job to lift her up as high as she wanted to soar—and to kill anything that tried to interfere.

Anna is amazing. Strong and brave and clever. But as a hero-centric reader, I admit I pretty much get heart-eyes when it comes to Charles. I am all aswoon at his (and Brother Wolf’s) utter devotion to her.

There are some interesting revelations about Bran at the beginning of the book as well. I’m curious what you may do with them as the series progresses. It’s nothing necessarily earth-shattering; rather, a new way of seeing him that I hadn’t considered before.

There is another character I’d like to talk about because I was very impressed with her development but to do so would give away spoilers so I will stay silent.

Also me: But spoilers.

I picked who the traitor was early on. It didn’t detract from my enjoyment of the book (well, maybe a teensy bit) but I appreciated the twists and turns you brought to the story to make it all join together and make sense.

Going in I had no real idea where the story was going to take me. I was surprised at what it ended up being about – that is not a complaint. There is still a greater threat to the pack and a reckoning is no doubt coming but this book tells a particular subset of the overall tale in a complete and compact way that was oh so satisfying.

I am giving the side-eye to my TBR of Doom right now because I’d dearly love to go back and re-read all of the Alpha & Omega books (and maybe the Mercy books too) because I’m not ready to let the characters go yet. I’ll be picking up the audiobook as soon as it is released and I plan on enjoying Holter Graham speaking Charles in my ears shortly after.