REVIEW: Bound by Your Touch by Meredith Duran 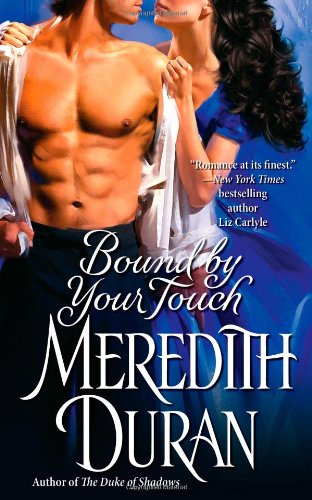 I was a big fan of your debut The Duke of Shadows, published last year. I can’t say how excited I was to learn that you had not one but two books scheduled for release in 2009, one in June and the other in July. Having now read the first, I can say that The Duke of Shadows was no fluke – Bound by Your Touch confirms that you possess a rare talent.

On the surface, this is the familiar tale pairing a bluestocking spinster with a profligate aristocrat. Lydia Boyce and James, Viscount Sanburne meet when he interrupts a speech she is giving before an archaeological society, hoping to drum up funds for her father’s research. Lydia is devoted to her absent father, who spends most of his time in Egypt on archaeological digs, and relies on Lydia back in England to act as his secretary, agent and fund-raiser.

James is actually at the meeting for the opposite reason – he wants to flaunt an artifact that he’s snatched from beneath his hated father’s nose at said father, who is in attendance at the meeting. Lydia is piqued at the interruption to her speech and is more than happy to tell James and the assembled onlookers that he’s been snookered – the artifact is a fake.

This sets James and Lydia off on a sort of extended duel, the sort of which again, on the surface, is quite familiar to romance readers. James, in trying to discover how he was ripped off, finds evidence that Lydia’s father is involved. Lydia is outraged at the suggestion and vows to clear her father’s name. James is also being menaced by mysterious notes whose provenance he knows nothing about (and in fact he is eventually accosted and attacked). James and Lydia eventually join forces to unravel the mystery of the fake artifacts and their connection to the shadowy figures who are harrassing James.

The parallels in James’ and Lydia’s respective relationships with their fathers (and their sisters) is one of the strengths of the book. These parallels are not quite subtle, but such a deft hand is employed that I never felt hit over the head with them; rather they had a symmetry that I really appreciated (I’m a sucker for symmetrical plots). James had never felt close to his stern and uncompromising father, but he began to truly hate him when a tragedy befell James’ beloved sister and James felt that his father turned his back on her. Lydia finds herself having to come to terms with the possibility that the father she idolizes has feet of clay, and finally has it out with her selfish and shallow (and prettier) younger sister, who years before “stole” the man Lydia believed herself to be in love with.

I loved the fact that these relatives were all drawn as very real and believably human; each is clearly and recognizably flawed but none of them are evil. Both Lydia and James discover that their views of their fathers are not so much wrong as incomplete. I love the a romance with enough complexity in characterization to acknowledge that “good” people can do bad things and “bad” people can do good things.

The other main strength of Bound by Your Touch was (duh) the relationship between James and Lydia. It doesn’t matter how many times the bounder-meets-bluestocking story is told; what matters is how WELL it’s told. In this case, it’s told very well indeed. James had clear (if not always entirely sympathetic) motives for his headlong race into dissipation. Lydia had tried for love before and been burned, badly, so her choice to withdraw and focus on what she felt good and useful at – being her father’s right hand – was understandable. I often have no patience with heroines who wallow in misery for years over some minor humiliation that occurred when they were younger. In Lydia’s case, though, it helped that she was ANGRY – she didn’t show it much but when it came out it was impressive to behold. She was angry at her sister, she was angry at the suitor who spurned her and she was angry at herself because she felt stupid and shamed.

A minor quibble: I found the actual details of the fake-Egyptian-artifacts subplot a bit confusing, though it became clearer once the villain was revealed. It may just have been me, since a friend who has read the book as well didn’t have any trouble with it, and I haven’t seen the complaint mentioned elsewhere.

I am about to start Written on Your Skin, which I understand to be at least tangentially related to Bound by Your Touch. I am very much looking forward to revisiting the world you have created, one of masterful characterization and lovely prose. My grade for Bound by Your Touch is an A-.

This book can be purchased at Amazon or in ebook format from Sony or other etailers after July 20th. Send your complaints to Simon & Schuster (adam.rothberg at simonandschuster.com is my suggestion as his name is on the press release regarding Scribd)