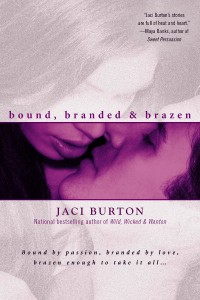 After being inundated with shifters, weres, vampires, and all sorts of alien and/or immortal life forms, it’s nice to indulge in a Contemporary Chaser (yes, right along the lines of a Unicorn Chaser). I believe the only Jaci Burton books I have had previous exposure to have been in the Unlaced and Laced anthologies. Shame on me, since I really do support the contemporary and would be devastated to see it’s demise.

bound, branded, & brazen is the story of the three McMasters sisters, Valerie, Brea and Jolene, and the book is broken up into each individual sisters’ story. The women grew up on their parents’ 10,000 acre cattle ranch, the Bar M, in Oklahoma. The trio was brought up by their obnoxious and uncaring Uncle Ronald after the untimely death of their parents. Valerie and Brea have been away from home for two years, returning for the funeral of their uncle at the insistence of Jolene, who has essentially been running the ranch since they left.

Valerie’s story is the first, bound, and for me, the most enjoyable. Valerie is now a doctor living in Dallas, TX, and she’s just joined a prestigious private family practice after having finished her internship and residency. Valerie swore to herself that she’d never return to the Bar M, and the only reason she’s back is because Jolene informed her she’s now a 1/3 owner of the ranch, partly responsible for figuring out the future of the ranch and making decisions. Valerie (and Brea) promised Jolene a month to iron things out.

Valerie’s reluctance to return to the Bar M has to do with more than her medical practice; her ex-husband Mason is the foreman of the ranch and Valerie is extremely conflicted about him and their relationship. They’d been in love since Valerie was a teenager, but Valerie’s inability to communicate with Mason out of bed eventually led to her divorcing him. It’s clear from the start that while Mason has been utterly dumped, he still loves Valerie, wants her back, and is willing to deal with quite a bit to get her back. While it sounds like Mason has turned into Mr. Beta, I can assure you that everything he does when it comes to Valerie is carefully planned as part of a full court press to get her back in his bed, in his life and on the ranch. Valerie and Mason’s story is choreographed beautifully, and Burton has a knack for providing people with plenty of emotional history in a few short pages so that relationships are natural and the sexual and emotional tensions ring true. A-

branded is Brea’s story, which fell in the middle for me. I didn’t love it, but it was an easy read, and clearly Gage Reilly is the nerd-whisperer. Brea lives in Tulsa and works as a freelance programmer/analyst. She also fits the stereotype of IT nerd; she’s shy, buries herself in books and has self-image issues, constantly comparing herself to her sisters. On top of everything, Brea’s had a few horrid relationships where the guys let her know she was a loser in bed. As soon as Brea arrived at the ranch, her libido sat up and noticed Gage, a gorgeous drifter and a gifted horse trainer, but she thinks she’s too plain, boring and possibly ugly for him to take note of.

Gage, of course, has had Brea on his mind from the moment she set foot on the Bar M, and he’s dying to get her out of her nerdy shell, since he’s sure that still waters run deep. Gage is one of those no-commitment types; he’ll give you the sexual experience of a lifetime, but he tells you up front that he’s not a relationship/roots/family guy. His reasons for drifting, while interesting, skirt believability, but don’t detract from the romance between him and Brea. Brea is willing to accept Gage’s terms as they get it on since she figures she’ll never have it this good again. Gage seems like he’d be a Dominant, but Burton didn’t go quite that far, simply making him sexually aggressive, and the scenes between them are certainly hot. B

brazen, Jolene’s story, is my least favorite of the three, mostly because I didn’t like Walker Morgan’s reasons for staying away from Jolene. But we’ll get there in a second. I also was a bit disappointed by Jolene. She comes across as a strong character in bound and branded, but it seems like her one and only weakness is Walker. While I didn’t mind her “love ’em and leave ’em” outlook, as the youngest sibling who has been successfully running a ranch (and ignoring or circumventing her Uncle Ronald during the prior two years), Jolene seems almost perfect. Like Mary Sue perfect. It grated a bit.

Walker has worked at the Bar M for 5 years, continually proving himself, and earning the job of Assistant Foreman. Walker lost his previous job due to “getting involved with the boss”, and initially won’t allow Jolene near him. Once they finally get the ball rolling, Walker immediately regrets it, his words and actions dance the line of harassment, but for the fact that he was an eager participant as it was happening. Walker refuses to be seen in public with Jolene or to acknowledge their relationship for fear of being called a fortune hunter or hurting Jolene’s reputation by association. I felt that this was one of those non communication excuses that could have been easily resolved (unlike Val & Mason’s story, which had more emotional resonance) and Walker was too wimpy to deal with it directly. Which was also off, because both Walker and Jolene are strong characters, and it didn’t seem to jibe with their personalities. C

Overall, the three stories were enjoyable, hot, and made me want to dig into Ms. Burton’s backlist; which I may do at the bookstore tonight. Overall grade is a B

→ Shuzluva
Previous article: REVIEW: Her Fearful Symmetry by Audrey Niffenegger
Next Post: REVIEW: Under His Spell by Kathy Lyons