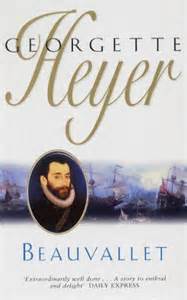 If you’ve never read anything by Georgette Heyer beyond her Regencies, or you’re not interested in prissy Regencies, preferring action and adventure, then do yourself a favor and try this one. It might be that because my introduction to Heyer was through her Georgians and Beauvallet that this is where my preference lies but, honestly I think it’s because these are just darn good books.

What’s the plot? Doña Dominica de Rada y Sylva is on her way back to Spain with her ailing father from his administrative post in the New World. The captain of the ship taking them home spies a vessel he knows is captained by English privateer Nicholas Beauvallet and, unable to resist trying to bring this most hated man in Spain to justice, he orders his men to open fire. Never one to turn down a challenge, Nick and his crew respond and the battle is on. Unfortunately for the Spanish captain, the fight is short, the English win and he and his crew are put in lifeboats and advised to sail to the nearest island.

Dominica is no shrinking violet and loudly states her opinion of Nicholas and the English. It’s not pretty. But Nick laughingly dismisses her tantrums and sees that she and her father, as well as her duenna and their belongings are transferred to his ship. What are his intentions, he’s asked – or is challenged depending on who’s doing to speaking? Why, to carry them both back to Spain. Doesn’t he know he’s a wanted man in Spain? Yes, but he’s not going to let a little trifling like that stop him.

As they sail across the Atlantic, Dominica pouts, sulks, flirts with others and generally tries to act as if she doesn’t care. Something that is negated by the fact that she can’t stop asking Nick’s valet and first lieutenant about him. He, on the other hand, is bluntly open and honest about the fact that he’s in love with her and wants to marry her. It’s only in the finale of the voyage that Dominica is honest with herself as well. But what’s to do? Nick has promised to set them down on Spanish soil and he’s a man of his word.

He promises to come back for her before the year is out but Dominica is a realist at last and knows his chances are slim to none that he could pull off getting her out of a land which wants him dead, dead and then a little more dead. She doesn’t count on three things. One – he doesn’t turn down a challenge. Two – he’s a man of his word. Three – his family motto is “Reck Not!”

This book really needs to be read while listening to a soundtrack by Erich Wolfgang Korngold. Something dashing, with lots of trumpets blaring to stir the blood and make you think swashbuckler-y thoughts then a switch to lush violins for the romance. Warner Brothers should have made this in a movie as it’s packed with derring-do, panache, boldness, cunning and laughs.

Okay first let me list some reasons you might not like this book and get them out of the way. Nick calls Dominica “child” a lot and there’s an obvious difference in their maturity levels. This is slightly off putting to me but not as much as it would be in a more contemporary novel. Dominica is headstrong as is the case with a lot of historic Heyer heroines and worse, she’s a high spirited aristocrat though she doesn’t annoy me as much as Leonie from “These Old Shades.” A lot of time is spent early in the book detailing the Beauvallet homestead in Hampshire with lots of noblesse oblige and brow knuckling servants who are just damn happy to please the Quality. None of this lasts long and the book is soon off and soaring into high adventure but I thought I’d mention all this and the fact that it’s soon finished in case anyone thinks they’re going to get bogged down in it for the duration.

Now for the good stuff. Nick is bursting with energy and vitality and goes straight for what he wants. What keeps him from being overbearing is by being easily cowed by some of Dominica’s whiles and stratagems – though others he sees through and chuckles at. When he tells her that he loves her, he means it and no second guessing.

By the time the action moves to Spain, Dominica begins to show some spirit that I can actually admire instead of her highstrung antics aboard the Venture. She sharpens her wits on the situation, displays herself better and shows herself a worthy woman whom man like Beauvallet would find a satisfying life with. Pretty only goes so far.

For Nick “failure is not an option” not because he’s going to push past anything and triumph against all odds – he just doesn’t ever think he’s not going to come out on top and with what he wants. “Can’t, won’t, unable” are words that aren’t in his vocabulary – he cheerfully can’t conceive of them. His daring escape from prison in Madrid will make your blood sing with excitement. I can feel the sheer joy of it leap off the pages as Nick improvises and charges headlong at all obstacles. Reck Not! indeed.

Still though Nick is usually devil-may-care about most things, when something stands between he and what he wants – he will buckle down and do what he must – such as when he told Dominca’s Aunt Beatrice had she been a man, he would have killed her if she continued to try and thwart him.

There are two secondary characters I have to mention as well. I had forgotten the character of Nick’s valet Joshua Dimmick – what fun. I love his running monologues as he talks to himself, using great language. Is it period or just made up? I had so much fun reading it that I don’t care. At least then you could still get good family retainers and valets. And I almost admire Senora Beatriz who has the wit to admire her foes when they act bravely, display courage and almost beat her. I pity her her weak husband and indolent fool of a son. What she could have accomplished without them as millstones around her neck.

A good pace is maintained throughout. There’s tension where it’s needed and high spirits anon. The fights are more hinted at but there’s enough to follow what’s going on and add color to the narrative. The romance is stirring and the ending will keep you glued to the pages. I do think Nick acted wisely in not telling his Queen his true reason to head to Spain, though. If you’ve only read the Heyer Regencies, treat yourself and give this one a try. A-