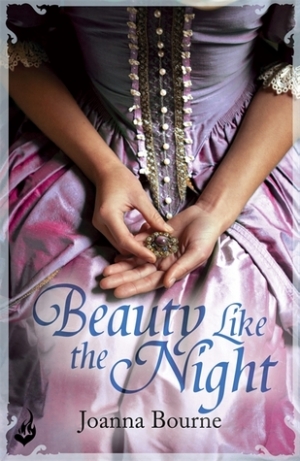 I’m not much a of a wine drinker. But I understand that fine wine is best savoured slowly and often improves with age. Your books are like that. I like to linger over your words and drink them in, letting them sit for a while to sink slowly into my consciousness rather than my typical reading style of voraciously speeding through a book. And, whenever I have re-read your books, I have always found things I missed on the first pass. Very often I enjoy them more on a re-read. I fully expect that to be the case with Beauty Like the Night.

Séverine de Cabrillac, for those of us who have read your previous books and in particular, The Forbidden Rose (my personal favourite), is – spoiler alert – the little girl Doyle and Maggie adopted near the end of the story and Justine’s younger sister. Séverine has now grown up and is working as a private investigator in London. When she was about nineteen, she ran off to Spain and joined Military Intelligence. She did not want to rely on favours from her friends and relatives in the British Service so she didn’t even tell Military Intelligence who she was. In Spain she did some very accomplished spying for England and fell in love with a French soldier, Gaëtan. Unfortunately, Gaëtan died in battle (a death which was in no small part as a result of the information Séverine had supplied to the British) and Séverine has closed off her heart since then.  After her return from the war, she set herself up as a private detective. Both Doyle and Hawker thought she’d be safer in this occupation than spying. She manages to find trouble however.

That was the story of her life. It mostly boiled down to she was lucky not to have been shot.

The story begins when Séverine is awoken in an inn in Dover by an intruder who asks her questions about a dead woman, a missing girl and an amulet. The intruder is charming and mysterious and thus begins a story which involves a spurned would-be-lover, a plot against Wellington, murder, theft and blackmail.

The charming intruder is Raoul Deverney, a French/Spanish wine merchant and talented thief who was married at gunpoint when he was seventeen to Sanchia Gavarre. Sanchia had a daughter, Pilar, but Raoul has never seen Pilar and knows she is not his biological daughter. He has never lived with Sanchia (she was not what most would consider a good woman and she was, at best, a half-hearted mother) but he supported both his wife and daughter from afar. Three months before the book beings, Sanchia is killed and Pilar goes missing, along with a valuable family heirloom. Raoul’s only clue is the name “de Cabrillac”. At first Raoul is uncertain whether Séverine had something to do with his daughter’s disappearance and the death of his wife but he quickly realises this is not the case.

Séverine begins to look into the murder, displaying Sherlock Holmesian powers of deduction and detective skill and the unwanted assistance of Raoul Deverney. While she’s at it, she also assists Doyle, Hawker and the British Service foil a plot against Wellington because she’s a multi-tasker. As it happens, Raoul Deverney turns up there too. Pretty much everywhere she looks there is Raoul. He’s handsome, interesting, charming, clever and mysterious and the connection between them is most inconvenient and very possibly unwise.

Raoul, for his part, is in agreement about the unwisdom of pursuing a dalliance but just like Séverine, he is unable to help himself. She is gifted when it comes to putting puzzles together, beautiful and wholly original.

One did not, he suspected, write poems to Séverine’s eyebrows. One slew dragons for her, or stood slightly to the left, holding her spare lance and buckler, while she did the slaying.

I love the way you put words together. There are some purely beautiful lines in the book, evocative and spare.

When his hand suggested she turn her face toward him, she did.

No-one has a turn of phrase quite like you do. I marvel at them even while I am also moved by them.

“…We do not have time for the pleasure of lengthy seductions.”
“You are the most pessimistic woman. Let me kiss the tip of your nose.” He proceeded to do that. “And see if that will lighten the mood.” He kissed the thin, vulnerable skin of her eyelids, left and right. “I’d planned to take a while getting to know your body. I was going to explore the palm of your hand for an hour or two, suck on the inside of your wrist, kiss your earlobes.”
When he said that, in every hidden place she ached for him. A silver ache that chimed through her like bells.
He said, “I wanted to call forth Eros with the heat and flame of our bodies. I wanted to torment us both into madness. I planned an exquisite seduction. You deserve nothing less.”
“Let’s try madness now and seduce each other afterward.” She laughed.
He said, “Turn to me.” With such simple words, it began.

For those who are curious where Beauty Like the Night fits within the rest of the Spymasters series, it is set in ETA: 1819 (oops!) , a few months after the end of The Black Hawk. Somewhat disappointingly (but only a little) Justine and Maggie are away in Scotland for the entirety of the story. However, there is plenty of Hawker and Doyle (as well as some delightful, touching and entirely typical information about the Markham family Doyle and Maggie have created).

Pilar is also featured prominently in the story. I liked Pilar very much; she was clever, resourceful and determined. I also like the journey you took Raoul on there. One can hope readers might be treated to Pilar’s own book when she’s grown up a little more (*hint hint*)

I’m sure Beauty Like the Night could be read as a stand alone but I think it is best appreciated in the context of the earlier books. Given I rate all of them highly, this is a feature, not a bug.

As much as I enjoyed Beauty Like the Night (and I did. I so did), I’ve a feeling that it will be even better on re-read – much like my experience with The Black Hawk.

To sum up; Beauty Like the Night is a delight. Grade: A-