You’ve done it again. While Bad Boyfriend is perhaps not as perfect (to my mind) as No Souvenirs, I much prefer it to Bad Company. The book focuses on two fascinating men and their relationship with each other and with those that surround them. There’s no intrigue, no mystery. There’s just people trying to live life without getting hurt too much. Eli and Quinn just jump off the page from the first time they touch and they don’t let go until their book is done. 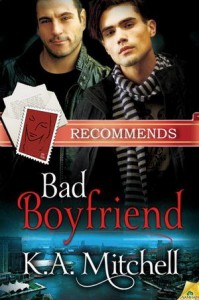 The book opens with Quinn having sex with Peter, his boyfriend of ten years, for the first time in four months. The next day, Peter leaves him because he’s getting married to the woman he got pregnant two months prior. Not only is Quinn in Peter’s wedding to  Chrissy, who has no idea about Quinn’s history with Peter, but she asks Quinn to be the baby’s godfather. So the story really starts the night before the baptism. Quinn’s at the local gay bar with his friend:

“I’m not still in love with him if that’s what you’re saying.”

“So prove it. Put an end to this insanity with a big fuck you.”

“Show up tomorrow with a drag queen on your arm and ask Peter if he thinks she makes your dick look bigger.” [This is totally one of the reasons I read your books, Ms. Mitchell, for lines like this. Beautiful.]

“His family. They’ve always been good to me. I couldn’t—” He hadn’t worried about losing touch with Peter’s brother Dennis. They went back too far for that, had been through too much in the Academy together, but he’d thought losing Peter meant losing the rest of the Laurents too—cracking on pop culture with Peter’s sister Alyssa, war games with Peter’s dad, and worst of all, losing Peter’s mom. Claire had welcomed him, mothered him, from the first time Dennis had brought him home on their break from the Academy. Two weeks after Peter moved out, Claire had called to tell him her son’s business was his own, but as far as she was concerned, Quinn was still a member of her family. He couldn’t humiliate them in church like that. [This is the — very believable because fully explained — motivation for much of the story. Peter’s family is more important to Quinn than Peter is by this point. They’re the only family he has and they love him for who he is, whether or not Peter left him.]

But the idea of showing up with a date, a very obviously gay date, someone who Peter would have to notice, got entrenched in Quinn’s brain.

So Quinn finds Eli. Eli is friends with Nate and Kellan, the heroes of Bad Company (Bad Boyfriend stands alone but it’s a little bit richer if you’ve read Bad Company first). Eli is 22 (Quinn is 35). Eli has never not been out, he’s never been able to hide who he is:

Eli had always been out. He didn’t really know how to make it a question of what he was willing to talk about. People took one look at him and knew he was gay. Not for the first time he thought it was a lot harder to look like Quinn, stupid little ponytail and all.

So he works it instead:

Being fuckable was something Eli aspired to every second of the day.

[Not incidentally, this book is filled with “favorite lines” for me. At one point, Eli is trying to explain to Peter’s very straight brother that Peter hit on him (Eli):

It was Eli’s turn to fold his arms. “I’ll have you know most gay guys find me hot.”

Dennis looked like he was trying to figure out why.

So Quinn approaches Eli to ask him to go to the baptism in the morning and somehow gets sidetracked into the hottest sex he’s ever had. The hottest sex Eli has ever had to. And something I haven’t read before in a m/m romance (although maybe I’m not looking hard enough):

He slid his hand down the muscle-ridged torso and landed on what he’d already felt rub on his belly. The fat length of Quinn’s dick stretched up to just under the waistband of his jeans. Eli stroked and let the inside of his wrist find the damp head pushing up past the denim.

Quinn didn’t stop smiling, but he looked like now they were both in on the joke. “Only if you’re a good boy.”

Yes, Quinn and Eli get each other off with Daddy kink (I can’t find an explanatory link that’s not fanfic related). FWIW, Daddy kink is not in the slightest age-play or incest-play, or at least it’s not in this book. It’s an older, more dominant man with a younger, submissive man, using “Daddy” and “boy” as their sex-related nicknames. And in this book it’s completely fucking hot.

And…that’s really the book. Quinn and Eli have to find their way to each other, despite the hot sex, despite Quinn’s attachment to Peter’s family, despite Eli’s abandonment issues. Quinn has to appreciate the joy and heat Eli brings to his life, while Eli has to trust that Quinn will never let him go.

This book not only has the best one-liners; it also has some of the best, most deeply personal relationship-related lines:

Every game Eli had played, tied spread-eagle, a hand or paddle bruising his ass, a flogger stinging into his crack, nothing had ever forced surrender on him like this deep, gentle fuck from Quinn. Eli had thought he liked to give up control, take a break for awhile and let a man push sensation onto his body. This was different.

Because this was what it was like to really lose control. To let Quinn inside, to let him make Eli feel so much more than the amazing sensations of bodies together.

And inside that surrender was safety. Quinn around him, voice in his ear whispering, “I’ve got you. Let me make you feel good, honey.”

But really, one of the best expressions of love I’ve ever read is when Quinn desperately tells Eli:

And even if you end up breaking my heart, I won’t mind, if I get to have you in my life for awhile.

This review is much more about impressions than a solid narrative of my reading experience because that’s what it feels like to read it. I’ve read this book at least four times, and each time I read it I get a different, deeper impression of how Quinn and Eli fit together so perfectly, how they work perfectly, how they become better people together by becoming more themselves. It’s easy just to remember the kinky sex, but each time I reread it, the lines I go back to again and again are about the relationship, not the sex.

Problems? First, Quinn and Eli have the big scene in which they figure each other out, figure their relationship out, and then…there’s one last scene with Peter and his family. And while it was a necessary scene for finishing up the loose ends of the story, I vaguely wish the emotional climax (hur hur) finished the book instead. I see why it had to happen that way, and I usually love to see characters just being together with a full understanding of their love for each other, but Quinn had already had his “I feel nothing for Peter anymore” scene before the final two scenes, so this seemed a bit too much.

And second, Peter was just…so fucking selfish I don’t understand how Quinn managed to miss it for so long or how Peter managed not to be an asshole for long enough that Quinn stayed with him. I get that it’s stress that really brings out the worst (or best) in people, so we’re seeing him at his worse, but there needed to be some redeeming something to make me understand why Quinn stayed for so long.

But overall, I adore, once again, how you let the reader work things out for ourselves. You don’t force-feed us the characters’ motivations; you don’t even spoon-feed us. You let us figure it out as the characters do. And that helps me know, viscerally, that these characters are utterly made for each other.

P.S. OMG, that cover’s brilliant. Those two men are perfect for Eli and his attitude and for Quinn and his smile.