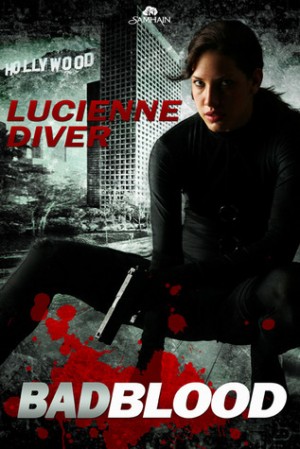 I’ll admit that I was a little skeptical when I picked up Bad Blood from the Samhain Publishing table at this year’s Author’s After Dark. It looked well and good, from the cover, though I debated whether or not it was really my cup of tea. I will say that the lovely woman representing Samhain made an excellent case for the book. After reading it, however, my only regret is that I didn’t crack it open sooner. As I turned the pages, I fell into an engrossing tale filled with humor, snark, adventure, and enough roller-coaster action to satisfy even the pickiest of enthusiasts.

Tori Karacis is a failed carnie and one of two black sheep in her very large, very Greek circus family. With freshly laminated PI license in hand, she joins her uncle, the other familial outcast, in trailing cheating spouses, taking pictures, crossing her legs during stakeouts and other more mundane tasks that keep private investigators in shabby chic sofas and coffee. Unfortunately, no sooner does she settle in than her uncle hares off for parts unknown, leaving no forwarding address, and hiding his tracks as only a seasoned professional knows how to do. So, in his absence, Tori keeps the business going – along with the intrepidly indomitable Jesus, the receptionist and only person in the world who can understand the filing system. Things are going to plan until Tori is hired to give a proposal to powerful, untouchable talent agent, Circe – a proposal in a mysterious envelope. Just as the envelope is about to be handed over in a back Hollyweird alley, Circe is murdered, right in front of Tori’s eyes, by a man with…greenish skin and scales?

What follows is a murder mystery dash through romance and mythology. Of course Tori has to contact the police. And of course the detective assigned the investigation, Nick Armani, is one she’s familiar enough with that he greets her with a growl. It doesn’t hurt that he’s drop dead gorgeous. However, things start to unravel rather quickly as Apollo – yes, THAT Apollo – comes onto the scene in all of his blazing glory, awakening a part of Tori that she only thought was a cute family legend. Seriously, who, today, is descended from Greek gods? Everyone, apparently, and Tori has some gorgon swimming in her gene pool. She’s always been able to stop men for a brief time, but it was nothing more than a party trick, of sorts, due to her oh, so intimidating demeanor. Until Apollo. Suddenly she finds herself drawn into a world that her Yiayia (grandmother), the bearded lady of the circus, always warned her about. It helps that Yiayia also runs a Greek-deity ancestry website called Mythography, her way of keeping up with the original Kardashians. Suddenly Tori is thrown into a world she’d always heard about – but never believed in. She’s torn between her handsome detective, the man who challenges her, and a literal Greek god masquerading as a movie star who has the power to melt panties as well as hearts. Tori can’t rest until she’s found Circe’s killer, even if that means her own life is in danger. The why of the murder, however, is what gets Tori into real trouble.

One of the things I absolutely love about the book is the snark. You could have taken it over the top, but you chose to apply it liberally – and carefully. It’s clear that Tori’s occasionally biting wit is her defense mechanism against, well, some of the absolutely strangest, batshit insane crap going on – and that’s insane by Los Angeles standards. The dialog is sharp and on point, balanced perfectly with Tori’s internal monologue. We get to learn Tori’s story right along with the action, bits and pieces judiciously doled out like pips of chocolate. Paranormal romance seems to fall on an interesting continuum with regards to how information is revealed. Sometimes the information is just thrown out there, left to fall where it may. Other times, the reveal is so slow that it comes crammed into the last five pages. This book falls perfectly in between, with plot points carefully placed to guide – rather than lead – the reader. You know where you wanted to take your readers, but you didn’t force it. It’s accomplished through gentle coaxing, heart-stopping action, left turns that come out of nowhere (but fit, beautifully) and some well-placed sizzling heat. It also doesn’t hurt that you present the Greek pantheon on a silver platter without it being overwhelming. I learned quite a bit even as I was snickering and flipping pages.

Honestly? There’s not much I don’t like about this book. In fact, I love it so much that I’ve devoured the next three books in the series as well. The only complaint I even considered is that Apollo is a bit…much at times. Like Tori, there were points when I muttered under my breath “Turn it off, Apollo.”

Thank you for this amazing start to a new, very promising series! I loved the chance to play in your world for a little while, and I know that I’ll be back for many, many visits (possibly with some moussaka or baklava in hand). A-

Waiting for My Hermes,