REVIEW: At Your Pleasure by Meredith Duran

As I read At Your Pleasure, I wondered if you will ever write a book I dislike. It seems unlikely. I love three of the books you’ve written and the two I don’t love—A Lady’s Lesson in Scandal and Wicked Becomes You—I like tremendously. I am enamored of your use of language, your deftness of plots, the complexity of your lovers’ relationships, and the crackling chemistry in your love scenes. In short, I am a big fan. 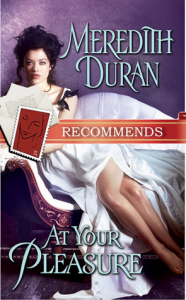 So, it shouldn’t surprise anyone I think At Your Pleasure is a very good book. Its hero, Adrian, might be my favorite of all your heroes—although I am terribly partial to Phin (from Written on Your Skin) and Julian (from The Duke of Shadows.) The historical context of the novel, the year 1715, a year after the coronation of the Hanoverian King George, is an unusual and fascinating one. So often the conflict between lovers centers around class but in this book, the line that divides Adrian and Nora, the heroine, is that of religion.

In 1715, in England, Catholics, even Catholic aristocrats, lived under restrictive laws. There were limits on the right to own and inherit property. Catholics paid special taxes, couldn’t have their children educated in Catholic schools, worship openly, or vote. The Settlement Act of 1701 forbad any Catholic or anyone married to a Catholic from sitting on the throne. At the same time, a significant number of the Tory peerage, most of whom were not Catholic, wanted to see a Scottish Catholic, James Stuart, on the throne rather than the current king, German born George I. It was a fraught time rife with tenuous political alliances.

Your heroine, Nora, the widowed Marchioness of Towe, is a Colville and her family is fiercely Tory. The Colvilles have been punished for their abiding loyalty to the Stuart King. Her father, now stripped of his titles and most of his wealth and property, is hiding out in France, plotting with those who would overthrow the current king. Her brother, David, is on the run, hiding in France and then in England, determined, at any cost, to implement his father’s dreams. Nora is the only one of her family living openly in England, in the family seat of Hodderby. Nora doesn’t necessarily share the sentiments of the men in her family but she is deeply loyal to her brother and will do whatever he asks of her, no matter how much it risks her happiness and/or safety. One of the most deadly things David has done is fill the wine casks in the cellars of Hodderby with volatile gunpowder which he plans to use in the upcoming Jacobite rebellion. Nora can tell no one of her brother’s plans—he’s a traitor to the crown—and she lives each day in trepidation, afraid the goals of her father and brother will destroy not only her, but Hodderby which she alone loves.

One night, as Nora readies for bed, a party of riders from the King arrives, led by Adrian Ferrers, the Earl of Rivenham. Rivenham, a favored Whig advisor to King George, carries a Writ of Parliament allowing him and his men unfettered access to Hodderby. Adrian has the right to stay as long as he pleases, command all who live there, and search the house freely. His ultimate goal is to flush out David Colville who will then be taken to the Tower and tried for his traitorous crimes. Adrian Ferrers loathes David Colville for more than just the latter’s politics. Adrian still feels the wound on his shoulder given to him, eight years ago, by David on the night David almost killed Adrian for the crime of loving Nora.

Nora, David, and Adrian grew up together—Rivenham land abuts that of the Colvilles. The Rivenhams, however, are a Catholic family and the Colvilles are of the Church of England. Adrian and Nora fell in love when they were young and both paid a terrible price for doing so. Adrian was beaten within an inch of his life by David, and shipped, by his family, to France to escape the wrath of the then powerful Colvilles. Nora was forced by her family to marry a cruel man in order to cover up her affair with Adrian. Adrian, when he returned to from France to England, was determined, at all costs, to protect his family from the sort of violence inflicted upon him by the Colvilles and their like. He renounced Catholicism, and used his charm, intellect, and will to become a powerful man in the English Court. His Catholic background makes him a target of many in the Court—if Adrian captures David, a Tory Jacobite traitor, and sees him hung, Adrian will augment his political power in the Court.

Nora is devastated to encounter Adrian again. For years, after she was married and he’d returned to England, she would see him at Court, and he never once spoke to her. She believes he hates her and, when she realizes he’s come to Hodderby to destroy her family, she tells herself she hates him too. When Adrian installs himself at Hodderby, he initially treats her cruelly, and she, terrified he will discover all she is doing for her brother, responds with defiance. Adrian is sure Nora knows the whereabouts of David and he pushes her hard, even torturing her with sleep deprivation. As the days pass, though, and Nora and Adrian begin to talk about their past which is full of tragedy and unshared secrets, their relationship shifts. They wend their way from enmity to something else, full of danger and desire. There seems no possible way they could ever find happiness together and yet, the longer Adrian is at Hodderby, the more he and Nora are drawn to one another.

I liked the relationship between Adrian and Nora. Adrian is a great hero—he’s as alpha as he needs to be but that doesn’t keep him from caring deeply and movingly for Nora. As he lives with her and confronts the truth he fears—he’s never stopped loving her—he decides to do whatever he must to keep her safe.

Persuasion would not sway her. Let her believe as she liked; it would make no difference to his course. Though she did not know it yet, a private battle had begun between them. To win it, he would use every weapon at his disposal, of brain and body both. Her injured feelings, her brother’s life—none of it signified if victory ensured her survival. He would save her from David Colville’s folly—no matter what it took.

Nora is harder to feel for. She’s so heedlessly loyal to her brother it’s excruciating to watch her. David has not only filled the house she lives in—and he’s abandoned care of—with deadly gunpowder, he’s scheming to marry Nora to yet another man who doesn’t love her, all to the aim of furthering David’s political goals. Nora’s biggest enemy is herself. Whether she is fighting against feeling the passion Adrian’s touch arouses in her or forcing herself to risk Hodderby and all who live there simply because David tells her she must, she makes choices hard to sympathize with. That said, she’s a woman in a time when women were subservient to the will of men. She watched both her sister and her mother die in childbirth; her brother and father have never seen her as their peer despite all they have had her do for them. She truly loved Adrian and, when she lost him, she also lost her freedom, illusory as it may have been. I found myself forgiving her foolish choices because I felt she’d lost the ability to value herself. Even when Adrian makes it clear he desires her, she doesn’t think it says anything about her charms.

She knew now that a man’s need for a woman was no special compliment. Men had endless needs. Her father, her brother, her late husband—all of them impatiently had required her attention day after day, year after year. She had grown wise enough not to be flattered by need. She had learned to be grateful, instead, for silence and indifference.

When she realizes she still loves Adrian, the realization fills her with sorrow. She thinks,

There was no use in longing for what she could not have. She would never be a man. Never travel the world. Never speak freely, with laughter, to those not her equal. She would never have him. Or a child.

Nora can’t see her way to any sort of joy so it is left to Adrian to force it upon her. And he does. He takes her to bed and she is able to respond only because he gives her no other choice.

Here was what she had forgotten: true desire. Unbearable, exquisite. No room for fear or conscience. Wanting, needing, to feel his mastery: be devoured, laid bare, filled, left no say in it.

Adrian not only loves Nora, he makes her believe she is worth loving. As he does so, surrounded by men who would like to see him fall, trying to figure out how to take David to the Tower without destroying Nora, the love between Adrian and Nora is terrifying. But, as you so eloquently write,

What is love but a great rebellion against caution and sense?

When I finished this book, I thought for a long time about all the issues it raised—the horrible power of religious zeal, the disenfranchisement of women throughout the centuries, the confines of familial love, the harrowing choices people make in order to survive. I flipped back through the pages and re-read sentences I loved—ones like:

Adrian had never felt Him save in His absence.

Otherwise she excelled in keeping occupied at endeavors too feminine to allow his company.

He meant to follow her down, but the vision she made arrested him: hair tousled, slipping from its pins; sober dark skirts knocked over her knees to reveal embroidered stockings and slim legs.

A week later, I began to write this review and as I did so, I thought not so much about the weighty issues underpinning your plot or the loveliness of your prose. Instead, I thought about Adrian and Nora and how much I cared for their story. I thought about how, yet again, you’d written a book I loved. I give it an A-.