I’ll be honest, this is a book I’ve been waiting for since your Guild Hunters series began and we first met the Archangel Raphael’s spymaster, Jason. So I started Archangel’s Storm with a sense of great anticipation. What I found was a quieter than expected romance, but one that I found great satisfaction in reading. 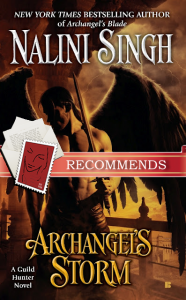 During Dmitri’s wedding to Honor (Archangel’s Blade), Jason receives notification that Eris, the consort of a rival archangel and member of the Cadre of Ten, Neha, has been murdered. Jason is immediately dispatched to Neha’s territory to ascertain who might be moving against Neha. In order for Jason to come in to Neha’s territory, he must agree to a blood bond with a member of her family. The blood bond is an ancient ritual that allows a limited fealty to another family; in this case, Jason retains his fealty to Raphael, but for all intents and purposes “loans” his loyalty and skills to Neha for the duration of his investigation. The blood bond is completed with Neha’s “beloved” niece, Mahiya.

Mihaya has long been a political pawn in Neha’s court, kept as a reminder of Eris’s infidelity with Neha’s sister, Nivriti. Mahiya first appears to Jason as a gentle, demure angel, who has passively accepted Neha’s cruelty and ill use. But in fact, Mihaya has suffered greatly at Neha’s hands, abuse after abuse. She’s lived her entire 300 years without any family that loves her. The one time she found friendship within Neha’s court, the angel had both wings and arms amputated for a trumped up reason, just to teach Mahiya that she will never be permitted anyone close. She’s lived a solitary, miserable existence. Yet Jason senses within her a lightness, a perception and a strength that he finds unexpected. When he tests that strength, asking her to help him examine Eris’s chambers where the murders took place, and she doesn’t flinch at the carnage and in fact notices him secreting evidence he found. He realizes that her observation skills and insight into the court could help him as he works to solve the mystery of who killed the consort of an archangel.

Mahiya is immediately intrigued and intimidated by Jason. He’s rarely speaks, unless spoken to. He shows no emotion, although she’s sure he feels things deeply. He’s beautiful, but also an enigma. But as she acts as hostess for Neha, she constantly surprises him by anticipating his needs, feeding him, providing small, unexpected courtesies.

Mahiya’s balcony doors were open as if in invitation, and when he entered it was to find her seated on a cushion on the living room floor. She’d changed from the sari into a tunic of vivid aquamarine teamed with slim cotton pants in plain black, her hair gathered in its familiar knot at the nape of her graceful neck.

In front of her sat a low table carved of dark wood and inlaid with the merest glimmer of find gold around the edges, on top of which stood a pot of tea alongside a tray of mixed savories and sweets, and two cups. He halted, disappointment curling through his body. “You’re expecting someone.”

Mahiya’s laugh was warm. “I am expecting you.”

He hadn’t been caught off guard for a long, long time. “How did you know when I would return?” Swirls of steam rose from the fine black tea she’d begun to pour.

But Mahiya has another motive for getting to know Jason and serving him well. She wishes to defect from Neha’s court. She attempted a defection once before to the Archangel Lijuan’s court. But within 48 hours of arriving at Lijuan’s court, Mahiya is sent back to Neha’s court and punished horribly for her attempt. She believes that Jason’s connection to Raphael may be the only way for her to escape Neha’s grip.

Jason is closing in on who killed Eris, almost positive of his quarry, but then three more murders happen in quick succession, one a vampire who was rumored to be involved with Eris, the second a lady-in-waiting to Neha, the third, a former lover of Mahiya’s who had ambitions to become Neha’s new consort. As the crimes against Neha pile up and become more atrocious and personal with each attack, Jason realizes that this is not the act of a minor player, but someone with power and a serious grudge against the archangel.

There are many things that worked really well for me about this story. Jason is a brilliant, complicated hero who has a horrifying past that informs all aspects of his character. He’s remote and hard to get know, the secrets of his past unfolding slowly. But once Mahiya awakens Jason’s passion, he is a generous lover. He tells her almost from the beginning that he is not capable of love, and that she should not plan a future with him. But as someone who has never received love of any kind, Mahiya’s heart is fully engaged. She loves Jason unreservedly, even knowing that at some point he will leave her.

Her breath rasped in her throat as she sucked in air, her eyes huge. But instead of flinching at the rough speed of his touch or pushing him away, she fisted on hand in the soft cotton of his T-shirt…and rose up on tiptoe.

It took every ounce of control he had not to accept the silent invitation at once. “You must understand,” he said, and his voice was a harsh scrape, “this won’t make me stay with you, won’t make me commit. I don’t have that ability.” To bond, to open his heart, to trust that the one he gave it to wouldn’t savage it.

Mihaya’s breath whispered over his lips as she maintained her position. “I know.” Soft words. “I also know that I’d like to share myself with a strong man who doesn’t court me with lies, is honest in his desire.”

I’ll be honest; I had to read Archangel’s Storm twice to really understand how I felt about it. It’s a bit of a departure from the rest of the Guild Hunter series. The romance unfolds slowly and almost quietly, in juxtaposition to the violence of the surrounding court intrigue. As I said, Jason is still waters, and his past is brutal and horrifying. He’s a complicated character, routinely telling Mahiya that he will leave her, he’s unable to commit to her, yet showing over and over that he is falling slowly and deeply in love with her. And Mahiya is a lovely foil for that, generous with her love and emotions, despite her tortured past. They are a couple that it’s easy to root for, even if I weren’t a great fan of Jason throughout the preceding books in the series. The book ends with several important developments in the overarching storyline, and the end game of the series is ratcheted up significantly by these changes. Overall, this is a solid entry into the Guild Hunter series, which contains a lovely, if quieter love story than the past books. I give Archangel’s Storm an A-.