SPOILER ALERT:   If you have not read Angel’s Blood, the cover and this entire review will be a spoiler.   LOOK AWAY! LOOK AWAY!! 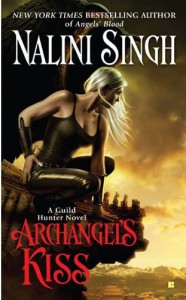 I’m not certain that I’ll be able to adequately articulate why I enjoyed this book so much but I did. Since the time that I received the book up in its pre-published form I have read it five times. I was forced (ha ha) to read it one more time to polish up this review.

This story is a continuation of Angel’s Blood where Raphael and Elena first meet. Elena is a Guild Hunter who ordinarily tracks and hunts vampires for the Guild.   Elena has scent discrimination skills and tracks vampires by their unique and individual scent.   Raphael hired Elena to track an archangel who had gone mad and was killing a number women across the city of New York. During their time together, Raphael and Elena fell in love and when Elena was mortally wounded, Raphael’s body produced ambrosia, a once in a lifetime event, that turned Elena from human to angel.

Archangel’s Kiss starts up a little after Angel’s Blood. A full year plus has passed.   Elena had been in a healing coma and she is newly angelic. In this story, we see Elena struggle in her transition from human to angel.   She doesn’t know the first thing about being an angel and I do mean the first thing, such as extending her wings from her body.   Raphael takes her to the Refuge, a place that only angels can reach (although vampire servants are brought there by angels).   At the Refuge, Elena at 10 school with all the angel children to learn about the history of Angels and how to hold her wings off the ground and eventually she’ll learn how to fly.

Elena   must learn quickly however because Raphael has received an invitation for the two of them to attend a ball in Elena’s honor by Lijuan, the oldest of the archangels.    This is no social event but rather a measure of Raphael’s power and a display of Lijuan’s.   Rumors abound that Lijuan is making the dead walk as the living.

So while Elena must learn to execute the most rudimentary angelic tasks such as flying she must also learn how to fight in her new body. Raphael asks members of his protective cadre, the Seven, to train her in combat.

The Refuge becomes tainted when one of Raphael’s angels is taken and tortured. Another angelic family is targeted when their child is kidnapped. Other angelic factions are being set against one another.   Initially the events seem random, or at worst, pointed toward implicating Elena.   As events escalate, Raphael sees this as a power play.    There is a power void left when Raphael killed the mad archangel in Angel’s Blood, and someone is positioning to fill that void.   Angels recognize nothing but power.

Amongst this interesting mystery plot is the continuation of the romance of Raphael and Elena. Both are learning to navigate the parameters of their new relationship. Elena is struggling to find her new identity and not be overwhelmed by Raphael.   Raphael is afraid of Elena’s fragility and contemplates his own mortality because Elena’s humanity has weakened him in some ways and strengthened him in others.

We learn more about both Raphael and Elena’s past.   What fears Raphael has for his own sanity and what demons have haunted Elena.   The worldbuilding is detailed.   Angelic houses are built to accommodate angels with wide doorways and complete drop offs.   The Refuge is a place that is only accessible to those with wings.   When you take us to China, I can almost smell the scent of the cherry blossoms.   And the book is full of beautiful people of all shades and ethnicities.

There’s some interesting and almost chilling foreshadowing when it comes to Ilium, one of Raphael’s Seven.   Elena and Ilium get along quite well and one of the other Seven suggests that Elena and Ilium’s friendship might end in Ilium’s death if he falls in love with her.   There’s a very sexy exchange between Raphael and Elena when Raphael refuses to allow Ilium to gift Elena with knives:

Teeth grazed over her lips. "Know this Elena-‘you'll never wear another man's knife."

She blinked. "He wanted to give me a blade? What's wrong with that?"

"Blades," he whispered, "and sheaths go together. And your sheath will only ever hold my blade."

There is a hum of sexual tension that glides just under the text.   Raphael is waiting for Elena to fly because then she will be truly strong enough for them to mate as equals.   Before, when Elena was human, Raphael had to hold back or he would have killed her with his strength, but now that she is angel like him, he can let go.   And so Raphael waits.   The non consummation is sometimes exponentially more sexy than the act itself.

This is a full book.   I was surprised that we were given a resolution to the Lijuan issue.   It almost seemed like the story had a bonus with by tackling the issue of Lijuan and her fetish with the dead.   I’m so intrigued by this world, so captivated by Raphael and Elena, and Raphael’s Seven, that I simply cannot wait until the next Angel book.   I think your series may do for Angels what Feehan did for vampires.   A-