REVIEW: Apples Should Be Red by Penny Watson 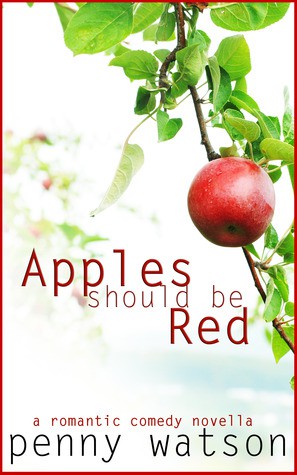 I’ve mentioned before that I love novellas. Done right, they can be perfect story gems, and possibly because of my crazy workload or possibly because I am myself a writer, I love being able to curl up with a story and finish it in one evening, without having to either stay up until two in the morning or take a break halfway through. (If I’m deep into work on one of my own books, I don’t want to spend the next day more anxious to figure out what is going to happen in this other author’s book than what is going to happen in the one I’m trying to write.) To me, a novella can be an utterly delightful visit to another author’s world and sense of story.

I’m also busy working on Mack Corey’s story (that’s Cade and Jaime’s father, for those of you who read the Chocolate books), and possibly because of this might be more alert to mentions of books with “older” couples. (The term does drive me a little bit crazy, however. Can I just mention that most of the fifty-year-olds I know are fit, active people who are in the prime of their careers and sense of confidence and personal power? Their sore muscles are usually from their latest triathlon or Ultimate Frisbee tournament, a soreness which, granted, lasts a couple more days than it did when they were forty or thirty, but I’m not sure why that seems to disqualify them from the average romance. When I first started trying to sink into Mack and his heroine’s point of views, I thought through every single fifty-year-old I know, and not one of them seemed to qualify for an “older” couple. Now I do understand that I am entirely surrounded by obsessive achievers, in my social circle, but even accounting for that bias: fifty isn’t ninety, people. It’s a great age to write about.)

Anyway, in this context, I happened to catch a Tweet from Penny Reid recommending Penny (no relation) Watson’s APPLES SHOULD BE RED, and since I had just read and loved Reid’s NEANDERTHAL SEEKS HUMAN, I snatched this up.

I’m still grinning. Oh, lord, this story. It puts the comic back into romance and the romantic back into comedy. It is absolutely precious. Although given that if you did a word cloud of the story, a big giant FUCK would probably dominate the cloud, that word precious might surprise you.

But that giant F word is because 62-year-old curmudgeon Tom, our hero, is utterly incorrigible. He’s the cussing, go-to-hell-and-leave-me-alone, impossible grump we’d all like to be sometimes. His scowling, swearing point of view was the hilarious highlight of this book. Don’t get me wrong: Bev, the heroine, is a wonderful character. But Tom had me in stitches.

Tom Jenkins’ son is married to Beverly Anderson’s daughter, and this year, through some catastrophes of termites and plumbing at the other houses in the family, Tom finds himself with the horrifying responsibility of hosting Thanksgiving. Tom mans up to it, though: He figured what the hell, he’d throw a bird on his grill with a beer in its ass and slide a can of cranberry onto a plate. Mrs. Anderson, Karen’s mom, would be horrified. Which made the whole debacle even more appealing. She was so buttoned-up, he wondered how she didn’t choke on her perfect strand of pearls.

God, shopping for a grill is such a pain in the ass, though. The prices people charge for their retarded grills. Seven hundred goddamned dollars.

This whole holiday bullshit was going to drive him to drink.

But, worse and worse, with all those plumbing/termite issues, Karen’s buttoned-up, pearl-choked mother, Bev, must crash alone at Tom’s place for the three days leading up to Thanksgiving.

He had no idea what Mrs. Beverly Anderson expected. But he wasn’t a goddamned bed-and-breakfast. Also, he wasn’t feeling particularly welcoming. Mrs. Anderson was a snooty-ass bitch, and her late husband, who’d keeled over from heart disease the year before, had been a slimy snake dressed up in a three-piece suit.

Tom pulled out a rumpled pack of Marlboros from his front shirt pocket and grunted. Empty.

Not to worry, Bev’s impressions of him are even more straightforward: Tom was an ass.

…A horrible, rude man. Crude and raw…He hated everyone, and everything. And talked about it all the time.

His garden stinks, his grass in front is four feet tall (although oddly perfectly manicured in back) and even his truck was rude.

And it only gets better from there. As Tom tries to make everyone eat Thanksgiving off paper plates and as Bev tries to pull off a Thanksgiving worthy of the only value she’s ever had in her life, that of being the wife and mother who waited on her slimy husband hand and foot for thirty years and got a string of pearls to show for it.

It is hilarious. The battle of wills between Tom, with all his cussing, and Bev, who, oh horrors, redoes his front yard to make it inviting, so that people might feel comfortable stopping by and talking to him, and who even finds the perfect grumpy looking gnome to plant in it by the daisies, in honor of Tom…it’s just priceless.

But through all the humor, there is this amazing heart and sweetness, and even tenderness, as Tom cusses his way to love and Bev agrees to take a bite out of an apple that isn’t red. (Because, in case you didn’t notice the title, apples should be red.)

While it might be going too far to say that Tom has a heart of gold, his heart does turn out to be gold for Beverly. And as it happens, his leathery hands and willingness to call a slimy snake a slimy snake might be just what Bev needs in her life.

It’s such a delight of a story. It’s hard for me to imagine anyone would regret spending an hour with this couple. You hate to finish it and be forced to abandon Tom’s point of view to, sigh, go and be polite to people. If you can’t bear stand-up comedy levels of profanity, maybe you should give this one a pass. But if you’re looking for something a little different, for characters who aren’t your standard formula, for a thumb-your-nose-at-life-and-fall-in-love-anyway comedy full of heart and a fundamental sweetness, I can only urge you to give this one a try.

It’s worth it just to see how Tom reacts to the gnome.

Previous article: 82. An Interview with Tracey Garvis Graves, Author of On the Island
Next Post: Daily Deals: pirates, billionaires, and heiresses