REVIEW AND GIVEAWAY: The Rose Garden by Susanna Kearsley 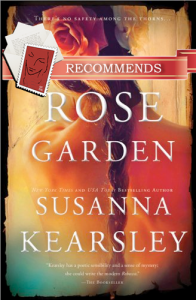 Your novel, The Winter Sea, blew me away last year. It was one of my Best of 2010 books, and I’ve recommended it not only to everyone I know, but to total strangers as well. When I was offered the chance to review your new novel, of course I jumped at it. But while that decision was easy, it was a little more difficult to decide just how to approach it as a reader and reviewer. A book that completely hits every mark for me is a rare and precious experience, but it also means that it takes extra effort to keep those memories from overshadowing the next read.

The Rose Garden is very much a Kearsley novel. Your voice is unmistakable, and there are aspects of structure and style that are similar to The Winter Sea. But it is also quite different in some ways. It would be wrong to categorize it as a genre romance novel, even though there is a very satisfying romance at the core of it and several smaller romantic sub-plots. It feels like a cross between a romance, a journey story (although not exactly women’s fiction), and a straight fiction novel with a strong sense of place and a wide variety of characters.

Eva, our narrator, journeys to Cornwall after the death of her movie-star sister, Katrina, in order to scatter Katrina’s ashes, grieve, and then decide what she wants to do with her life. Although their family had lived in several different countries, their summers in Cornwall held a special significance for both sisters. A successful public relations executive, Eva had settled in Los Angeles to be near to and work with Katrina. Now she is alone, and when the Halletts invite her to stay at Trelowarth while she considers the future, she accepts. She is drawn in to their world: Mark, the son and proprietor of Trelowarth Roses; Susan, his younger sister whose plans to help Trelowarth achieve a sounder financial footing make Mark uncomfortable; and Claire, their artist stepmother who provides a loving home and a link to the past.

As Eva settles in and picks up the threads of her old life, she suddenly finds herself briefly thrown back in time to Trelowarth in an earlier and more dangerous era (which readers of The Winter Sea will recognize, albeit from a different angle). At first she thinks she’s hallucinating from stress, grief, and exhaustion. But the episodes continue, and soon Eva meets the 18th-century inhabitants of the house: Daniel Butler, a sea captain, and his Irish friend and collaborator, Fergal. Daniel, Fergal, and Daniel’s charming and erratic brother Jack are enmeshed in Jacobite plotting against the Crown, as well as more run of the mill smuggling, and as Eva involuntarily goes back and forth in time her risk of being captured as a confederate of the two grows. But so does her attraction to Daniel and her friendship with Fergal, and even though she knows a great deal about what might happen to them, as well as tantalizing details about their individual futures, she falls in love with Daniel, and she is increasingly drawn to life in that period. But how can she stay in the early 18th century, and what will happen to the Eva of the 21st century and the people around her if she succeeds in going back permanently?

I am not a fan of time-travel novels as a rule, but I’m happily making an exception for your books. I really appreciate the way you deal with the small and not-so-small details, like Eva’s clothing. When Eva goes backward and forward in time, she arrives wearing time-inappropriate attire. This is manageable in the present, but the stock of clothing available to her in 1715 is much smaller. Not only do you pay attention to the dangers and ramifications of this problem, but you use it to show how Eva and Daniel’s relationship progresses, and it leads to a lovely moment in the story. When Eva is finally wearing clothing that is intended for her alone, it means something.

Equally insightful and appealing to me is how you portray gender issues. While time-travel romances tend to focus on the differences for women across the centuries, here Eva and Daniel discuss the constraints and opportunities for both men and women. Eva is frustrated by the limitations she faces in the early 1700s, but Daniel reminds her that although he has more freedom to make decisions and take public action, he too is constrained in ways that Eva realizes are different that those men face in the present:

‘I assure you, Eva, I do have a high regard for liberty.’

‘And whatever custom may decree in public, in my family every woman has been free to speak her mind.’

He smiled and said, ‘I’ve found that there are many things more safely done behind closed doors than in the public view, by men as well as women.’ Then, more serious, ‘Do you think I am free to say exactly what I please, and when? In truth you’d be mistaken. If I stated my opinion of the current state of politics, I’d soon be clapped in irons for treason.’

He was right, I knew. ‘But even if you can’t state your opinions, you can act on them.’

‘Not openly. No, you and I are both confined to showing but one part of us in public, and another to our friends. As for the whole of us … well, that must be reserved for those few people we are fortunate enough to love and trust.’

The 18th century is so exciting, both for Eva and for the reader, that the contemporary story pales somewhat by comparison. The potential secondary and tertiary romances are enjoyable but not particularly gripping, but the Hallett family is well drawn and their individual and collective stories are engaging.

As always, the setting is beautifully depicted. I could smell the sea of Cornwall and feel the walks up The Hill, and the historical background is terrific. There is a strong sense of context without any dreaded infodumps, and the reader is immersed in the period without feeling like she’s attending a lecture.

The most difficult aspect of time-travel romance is finding a way to have an HEA that seems to make sense and that doesn’t cause too much sadness for those who are left behind. You come up with an ingenious and surprising solution to this problem, but one that is sufficiently complicated that I had to go back and read it again. So readers, be warned: when the book nears the end and the suspense is killing you, make sure to slow down while you read. I can’t explain without massive spoilers, and I’m not sure I entirely buy it, but hey, it’s a time-travel, so I can live with that. Readers can rest assured that Eva and Daniel have a satisfying HEA, and a couple of the secondary threads wrap up with happy surprises.

This novel is an example of how a story can be utterly, completely romantic in tone without having explicit sex or even many romantic interludes between the hero and heroine. It is worth keeping in mind that it does not follow the conventions of a genre romance. A key focus of the story is on Eva’s journey from a grieving sister to a woman who looks forward to her future with the man she loves (however unusually she’s reached that point), and her friendships with Fergal, Claire, and the rest of the Halletts are critical parts of that journey. The first part of the novel is accordingly quite sad, although I didn’t find it depressing. As Eva recuperates at Trelowarth and becomes involved in the Hallett’s lives, and then even more entwined in the lives of Daniel, Fergal, and Jack, the sadness recedes (although it never goes away completely, and how can it?).

The first line of this story is devastating, but the last line is filled with happiness. They make powerful bookends to a memorable novel.

→ Sunita
Previous article: REVIEW: In Total Surrender by Anne Mallory
Next Post: REVIEW: Lord of the Vampires by Gena Showalter