REVIEW: All Systems Red (The Murderbot Diaries #1) by Martha Wells 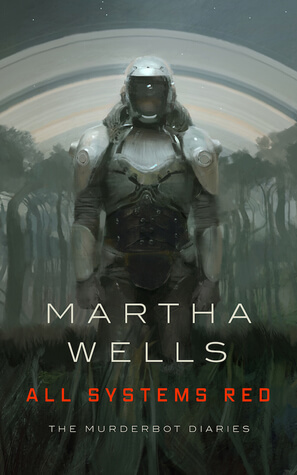 “As a heartless killing machine, I was a complete failure.”

In a corporate-dominated spacefaring future, planetary missions must be approved and supplied by the Company. Exploratory teams are accompanied by Company-supplied security androids, for their own safety.

But in a society where contracts are awarded to the lowest bidder, safety isn’t a primary concern.

On a distant planet, a team of scientists are conducting surface tests, shadowed by their Company-supplied ‘droid — a self-aware SecUnit that has hacked its own governor module, and refers to itself (though never out loud) as “Murderbot.” Scornful of humans, all it really wants is to be left alone long enough to figure out who it is.

But when a neighboring mission goes dark, it’s up to the scientists and their Murderbot to get to the truth.

People I trust have sung your praises to me for years yet it’s taken until now for me to take the plunge and try one of your books – or novellas to be precise. I think I was just scared off by knowing that your other books were all part of a series and I’d be taking them all on and playing catch up. This one was the first in a new series and after reading Sirius’s enthusiastic review and managing to grab this for 0.99, I was on board. (And I have to be honest in agreeing with the old phrase “the more things change the more they stay the same.” I’d swear that I work with a bunch of Murderbots who only do the least they can get away with, prefer to check social media rather than doing even the “half ass” version of their jobs and that my company buys the crap support package of tech they spend $$$ on. Thankfully though, I’ve never needed one of them to save me from being killed.)

Firstly, the cover is great. Since “Murderbot” loves its armor and especially setting its helmet on opaque, this is the perfect image. Murderbot will interact with its humans but really prefers not to be looked at or to have to look at anyone. I’m not quite sure I buy into the theory of one of its humans that Murderbot is shy – more that its introverted and hasn’t been programmed to need to like humans. The idea of revealing its reactions and features to its humans horrifies it and it much prefers to be left alone and to remain quietly in the background, watching its favorite entertainment serials.

The job it’s been retained for is to accompany a science expedition to a remote planet and protect them from anything hostile. After an unknown bit of fauna almost takes out one of its humans and severely damages Murderbot, the humans scrutinize the information package they were supplied by the Company thereby uncovering some disquieting omissions. Before they can even dig deeper into that, they’re running from an unknown danger and fighting for their lives. With all kinds of reasons for them not to trust Murderbot, will its humans risk their lives and go along with its plan?

This is a novella but it felt much longer – in a good sense – and is packed with a story that feels much more complete than is usual for a story of this length. One thing I noticed is that if we don’t need to know something, the narrative isn’t slowed down by trying to supply it. Some things are sketchy but I didn’t miss not knowing them. There is an unsolved event in Murderbot’s past that lead to its self designated nickname but which, from the blurb up at Amazon for the next book in the series, will be explored more then. The horrific event is what causes its humans to initially balk in the trust department but when needs must, their feelings and innate humanness come into play. As Sirius said, the humans aren’t detailed in depth which makes sense as Murderbot’s POV is all we see. But there are enough little descriptors for the humans to not be flat cardboard characters.

Murderbot is the real star of show and I loved it. It has a deadpan, sarcastic sense of humor and its interior monologues are hilarious. It is smart enough to have hacked itself in a way that hides this has been done and prefers to be watching its downloaded serials which sound like futuristic reality shows and soap operas.

Gurathin hesitated. “It’s downloaded seven hundred hours of entertainment programming since we landed. Mostly serials. Mostly something called Sanctuary Moon.” He shook his head, dismissing it. “It’s probably using it to encode data for the company. It can’t be watching it, not in that volume; we’d notice.”
I snorted. He underestimated me.
Ratthi said, “The one where the colony’s solicitor killed the terraforming supervisor who was the secondary donor for her implanted baby?”
Again, I couldn’t help it. I said, “She didn’t kill him, that’s a fucking lie.”
Ratthi turned to Mensah. “It’s watching it.”

Murderbot can do a “half assed” version (its description) of its job with half its AI tied behind its back but when the fit hits the shan – it can act fast even as it’s ignoring all the crap info the company programs are trying to send it.

I have small energy weapons built into both arms, but the one I went for was the big projectile weapon clamped to my back. The hostile that had just exploded up out of the ground had a really big mouth, so I felt I needed a really big gun.
I dragged Bharadwaj out of its mouth and shoved myself in there instead,

But for the most part, it just prefers to be left alone and do not try and talk to it about feelings! That will make it flinch. I hope that the future books will explore a bit more of what frustrates Ratthi – namely that the SecUnits are partially constructed from cloned material and that he thinks using them as mere robots is “disgusting, it’s horrible, it’s slavery.” Murderbot’s final action might lead to opening this line of thought up and digging a bit deeper. Because it’s clear from its use of words that Murderbot has progressed far beyond the mindless robot that the Company cheaply produces en masse. It mentions loving its armor – well it’s trying to avoid touchy-feely discussions with its humans and that – when they agree with it – its humans are the best.

I like that the book didn’t end with hugs and feels since that makes Murderbot deeply uncomfortable. What will Murderbot do next now that it’s been freed from being a Company drone? I have no idea but I’m definitely waiting eagerly for part two in the Murderbot Diaries. A-