Warning: mysqli_query(): (22032/3141): Invalid JSON text in argument 1 to function json_contains: "Invalid value." at position 0. in /home/customer/www/dearauthor.com/public_html/wp-includes/class-wpdb.php on line 2187
 REVIEW: Against the Tide by Elizabeth Camden
May 20, 2013

REVIEW: Against the Tide by Elizabeth Camden

I’m always on the hunt for new and different in romance, and when it comes in the form of an inspirational historical suspense story centering on the opium trade in late 19th-century Boston – with a gorgeous cover as a bonus – I am helpless to resist. 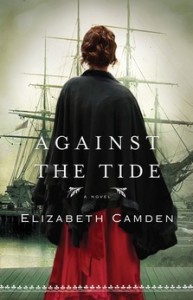 As a child, Lydia Pallas became all too familiar with uncertainty when it came to the future. Now, she’s finally carved out a perfect life for herself – a life of stability and order with no changes, surprises, or chaos of any kind. She adores her apartment overlooking the bustling Boston Harbor, and her skill with languages has landed her a secure position as a translator for the U.S. Navy.

However, it is her talent for translation that brings her into contact with Alexander Banebridge, or “Bane,” a man who equally attracts and aggravates her. When Bane hires Lydia to translate a seemingly innocuous collection of European documents, she hesitantly agrees, only to discover she is in over her head.

I’ve read Against the Tide three times now, and I’ve been sitting on this review for months because I’m both enthralled and a bit conflicted. Your characters are complex and memorable, and the setting and suspense had me in a full-on book trance even on the second and third reads. Only one element in the narrative bothered me enough to add a minus instead of a plus to the letter grade, but it’s one that’s central to the story.

Our hero, Alexander Banebridge, is an enigmatic loner. As we learn his backstory, his motivations become clear, especially his obsession with redemption and revenge. We see Bane struggle with the sins of his past, and his need to protect the very few people he cares about make him the epitome of a tragic hero.

A character like Bane needs strong counterpart, and Lydia Pallas is no doormat heroine. I adore Lydia. She’s smart (a linguist and translator for the Navy!) and confident, and despite her vulnerable situation, she’s not afraid to take risks to get future she knows she and Bane deserve.

As a romance, Against the Tide has everything that makes me happy – especially the relationship-building. Lydia’s more than a bit fussy, and before they even say a word to each other, Bane knows how to push her buttons.

Lydia glared at the closed door of the office where Lieutenant Banebridge had entered. Every time that man was in the office, something turned up askew at her desk. A picture was upside down or her dictionaries were no longer in alphabetical order. She had been staring straight at the man as he crossed through their office, but he still managed to tamper with her belongings and escape her notice. Lydia’s mouth narrowed to a thin line as she rearranged the ink bottles, knowing it would be impossible to concentrate until they were back in proper order.

“I really don’t like that man,” she muttered under her breath.

Bane keeps poking during their first actual conversation, but Lydia proves she can hold her own with a master smooth-talker.

“Twenty dollars would pay your salary for an entire week!”

“It will also pay for an overnight translation.” She needed that money and was determined to fight for it. With a casual glance she scanned the other customers in the coffeehouse. “Perhaps someone else could do it? Let’s see. Paddy O’Malley, playing chess in the corner, is always looking for work. Perhaps you could ask him. Or better yet, there is a school of architecture just down the street. Perhaps they’ve got some Turkish translators with a bit of time on their hands.”

….“Come now,” he said in a coaxing manner. “I’ve seen ten-year-olds forego a night of sleep in order to see Santa Claus. Surely you are up to the task.”

“Did any of those ten-year-olds read Turkish?”

While many romantic suspense stories rely solely on external conflicts to bring lovers together, we learn enough about Lydia and Bane as individuals to feel the internal upheavals they inflict on each other. And yes, this is a no-sex inspie, but it’s definitely not one I’d label as “sweet” or (*shudder*) “clean.”

His back was to the wall of bookshelves and she had him pinned. “I need you to quit kissing my neck and concentrate here.” How was he supposed to be noble when she was so relentless?

This book also works for me as an inspirational. The faith messages are low-key and cohesive, and they’re integral to both the story and to Lydia and Bane’s relationship. Where Bane’s dramatic conversion as a teenager is the motivation for everything he does, Lydia’s spirituality is based on the “superstitions” of her Greek fisherman father.

“Lydia, do you still go out and pray to a full moon?”

His smile grew wider. “Count on it.”

“Then have at it.” She went back to flipping through the papers in her file, unable to meet his eyes but grinning broadly. “Yes, I go out on each full moon. Always. I still face the north and simply pray a little bit. Not to Artemis or Jesus or anyone specific. . . . It just feels good to believe someone out there is listening.”

There’s more direct discussion of faith later in the story, yet it never devolves into sermonizing or (*shudder*) “you’re not worthy of my love until you’re as Godly as me” shaming. And it’s even (*gasp*) humorous:

“If you think God has neglected you, then what am I?”

“A nuisance sent to disrupt my ink bottles?”

As a suspense story, opium smuggling might seem over-the-top for an inspirational romance, but compelling characters in a convincing setting make it work. We get secret codes, kidnappings, disguises and dramatic rescues, driven by a disturbing sociopathic villain.

However…. [SPOILERS!] This is where my one misgiving comes in. While I understand the need to make opium a personal issue for both main characters, the portrayal of Lydia’s addiction seems didn’t sit quite right. The backstory of her introduction to the drug – as a sedative in the orphanage – was entirely believable and affecting. But every time Lydia’s little blue bottle popped up in the story, it felt forced and out of place. It wasn’t until full suspense mode kicked in that I saw it as necessary to the plot. And when that drama ends, we’re given what amounts to an extended epilogue that’s so overtly educational and overly earnest it comes perilously close to the similar change of tone that disrupted the first book in the series.

Luckily, a few more swoon-worthy moments redeem this story of redemption, and it ends with a beautifully understated faith message….

“Can you believe it, Papa?” she whispered…. She still talked to the full moon, only now she was certain someone was listening.

So despite a few reservations, Against the Tide is exactly what I look for in both historical and inspirational romance – and it’s already on my keeper shelf. A-