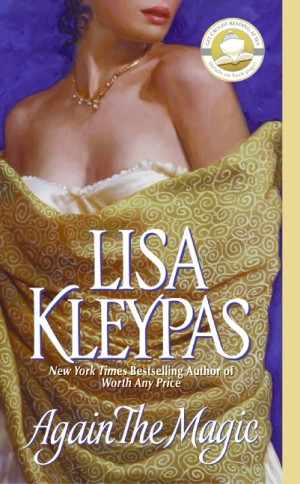 I’ve told this story before, but I’ll mention it again here because it might be the reason why I adore Again the Magic so much. About ten years ago, over Thanksgiving Day dinner, my Dad calmly announced that he’d be having triple bypass surgery the next week. My sister and I made immediate plans to drive down to North Carolina to be with my mother during the surgery. The day of surgery, after wishing my dad well and telling him we loved him, we were sent to an incredibly uncomfortable little waiting room, where we’d wait the four hours for his surgery to be complete and for him to moved to the ICU where we could visit him. We were in the waiting room about five minutes and my mom decided she needed to walk the hospital halls. My sister went with her, as I stayed in the waiting room just in case we received an update. As I sat waiting,  I pulled Again the Magic out of my bag and began to read. Aline and McKenna’s love story took me away from the terrible nervousness and offered me a comfort that was profound enough that I re-read the book once a year, just because it is now so beloved.

Lady Aline Marsden understands her duty. She’s been raised by a tyrannical father and a negligent mother for the exclusive purpose of making an advantageous match. She spends her days growing up learning to run a household. But during her free time, she spends as much time as possible with John McKenna, a stablehand who was saved from an abusive father during his childhood and brought to Stony Cross Park to act as a houseboy. As he’s gotten older, he’s risen slightly to the rank of stable hand.

When the book opens, we find McKenna sneaking into Aline’s room. He and Aline have been constant companions since childhood, but now that companionship is building into something more. McKenna loves Aline wholeheartedly, but he also knows that she is far beyond his reach. Aline doesn’t care a wit for convention and only wants McKenna to kiss her. When McKenna arrives in Aline’s room, he finds that she is deeply put out with him for kissing a local village girl. For McKenna, a mild flirtation; for Aline, a betrayal to her young heart. As they fight, Aline pushes McKenna to kiss her, he refuses and she finally lays one on him. He’s blown away by the beauty of that kiss, but knows that he can not allow things to go any farther. He threatens to leave Stony Cross Park if Aline doesn’t forget immediately all about her future plans, which include forsaking her heritage and being only with him.

Of course, the lovers kiss again, and this time, they’re seen by Aline’s younger sister, Livia, who tells their father. Aline is called to her father’s study, where her father tells her McKenna will be gone from the estate the next day, and that if he returns, her father will use his considerable influence to ruin McKenna’s life. Aline knows the only way to make McKenna stay away is to make him believe that she has had a change of heart. When she sees McKenna she is cruel, although her heart is breaking, and sends him from her with no hope that she would welcome his return.

Shortly after McKenna leaves, Aline is in the kitchens and is caught in a fire that leaves her legs badly burned. Twelve years later, Aline’s father is dead, and her brother Marcus is now Lord Westcliff. Aline and Livia both still live at Stony Cross Park, with Aline acting as hostess for Marcus, who has yet to find a bride. Marcus decides to host a house party for the purpose of courting Mr. Gideon Shaw, one of the Shaws of New York, a nouveau riche American family to invest in a new business venture. When Aline goes to greet the American traveling party, she realizes immediately that one of the men in the party is McKenna.

McKenna, now a self-made man with millions, has come to Stony Cross Park for one reason, and one reason only: vengeance against Aline for breaking his heart so cruelly. He comes home to find Aline much changed. Oh, she’s still beautiful, but she’s reserved. He’s decided that his course of action will be to seduce her then leave her as heartbroken as he was. But as he begins his chase, he finds himself still seduced by this beautiful woman who already broke his heart once. Aline has no idea why McKenna is at Stony Cross Park. She’s cautious of him and remembers enough about him to realize that he’s probably not just there to do business. She’s had no other love of any sort since McKenna and she’s never stopped loving him. But she has secrets too, she knows that McKenna could never love half a woman, which is how she feels since her injuries.

The book features a trope that I have great affection for: forbidden lovers. Even more, there is a tremendous sweetness to this book. McKenna is definitely an alpha hero, and yes, he starts off wanting vengeance, but he backs away from that plan quickly as all of the feelings he had for Aline come rushing back. Aline herself is a really delightful heroine. She’s smart and accomplished and an excellent hostess. She’s also been sheltered by her well meaning family and is deeply afraid of McKenna finding out about her injuries. They have a wonderful chemistry that you establish right from the beginning of the book. The love scenes are really well written (a true gift you have) and build upon each other intensifying the growing relationship between McKenna and Aline. The book features the BRG (Big Romantic Gesture), and it’s one that makes my reader’s heart swoon. McKenna’s declaration of love is one that I adore reading over and over. The story also features a really lovely secondary love story for Livia, Aline’s sister, who also has a tragic past. All in all, it is a really satisfying historical novel, one that I think doesn’t get mentioned nearly as often as Dreaming of You, or the Wallflower series. I hope that this review will remind readers of how much they enjoyed your older books and prompt them to pull them off their bookshelves, or tempt readers who have only read your contemporary work to give your historicals a try. Either way, Again the Magic is a true favorite of mine. Final grade: A-.