May’s TBR Challenge category is “Old School,” defined as a book that is 10 or more years old. I had plenty of options, but after dithering a while I chose this landmark category romance. Published in 1984 by Harlequin, it was acquired by a legendary editor, Vivian Stephens, and written by an author who would go on to be famous in the genre and pathbreaking in her own right, Sandra Kitt. Adam and Eva is not the first series romance to feature African-American lead characters or be written by an African-American author, but it was the first to be published at Harlequin, and its original cover made the race of the hero and heroine clear. I’ve had this book in my TBR for years, but somehow I never managed to crack it open; perhaps I was afraid of being disappointed. But on a rainy, dark weekend morning a book set in the Caribbean seemed like the perfect antidote, and once I started reading I didn’t stop. 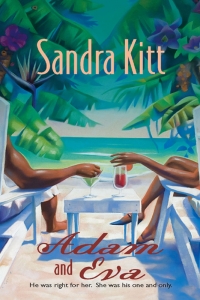 The book opens with a textbook “in-motion” scene, but it’s not one in which the heroine meets the hero. Instead, 29-year-old Eva Duncan is being reassured by 9-year-old Diane Maxwell that their plane to the US Virgin Islands is landing safely. Diane is a seasoned air traveller on her way to visit her father, while Eva is taking her first airline trip as part of a well-deserved vacation. Married to her high school sweetheart right after graduation, Eva was tragically widowed in a house fire which also killed her daughter. In the two years since she’s pulled her life back together, found a satisfying job as a paralegal/law clerk, and learned to live as an independent woman. This holiday comes courtesy of her boss, who has offered her his cottage on St. John for six weeks while he and his wife are in Europe.

Romance readers, you will be completely unsurprised to learn that Diane’s father, Adam Maxwell, is a tall, gorgeous, and somewhat forbidding marine biologist who seems permanently embittered after his divorce from Diane’s mother, and he lives down the road from Eva’s cottage. Eva isn’t interested in a relationship because she’s still mourning Kevin, but she and Diane have taken to each other and so Adam and Eva’s paths cross frequently.

I loved the pace and focus of this book. Like many Harlequin books from the 80s, there is no hero POV; this is all Eva’s book. Eva is a sympathetic character that I didn’t have to relate to in order to feel invested in, if that makes sense; I don’t know what it’s like to suffer such a tragic loss, but its effects on her seemed believable and realistic. I really appreciated the way she felt guilt about moving on from her husband while at the same time realizing that their life had lacked a certain level of passion.

Adam, whom Eva calls Maxwell or Max for a lot of the book, is an interesting hero. He’s pretty unlikable early on, and it takes a while before the reader can fully trust him as a partner for Eva. He’s always a good and caring father, but he’s awkward with his parenting and his failed marriage has made him unwilling to contemplate a serious relationship. But he loves Diane and he wants to connect with her. Adam is clearly committed to his job, in a way that we don’t see as much as I’d like in romances written today. He’s not a workaholic in the sense of having no other life, but his work is important and we see him at work, often including Diane and then Eva. Work isn’t an escape for him, it’s just part of his life.

There are several things that locate the book in the mid-1980s. This is the pre-cell phone and pre-internet era; Adam only sees his daughter two weeks a year and they don’t seem to have much contact apart from that. It is a reminder that geographical distance made a lot of difference back then. There is radio, but very little TV on St. John, the island where Eva is spending her vacation (cable TV had shown up in the US by then, but it wasn’t widespread nationally, let alone internationally). The pace is generally slower. Eva reads a lot, writes letters, and crochets when she’s not spending time with people on the island.

The fact that we read entirely in Eva’s POV makes Adam less sympathetic, especially in the first half of the book, and some readers may find him hard to take. It didn’t bother me too much, in part because the story feels like it’s mostly Eva’s. It balances between what we now think of as women’s fiction and the ultra-tight romance focus that so many genre books today feature.

Other differences: Adam has a friends-with-benefits relationship when Eva arrives on the island, and Eva goes on a couple of sort-of dates with a taxi driver. Lavona isn’t an evil woman, although she’s not portrayed sympathetically, and Eva fends off Deacon’s interest because she’s not ready for any relationship, not because she’s decided Adam is The One. I found the fact that it takes Eva and Adam more than half the book to act on their attraction to be refreshing. There is a fair amount of push-me/pull-you from Eva, who hasn’t even thought about dating since she was widowed, but once they finally get together the sparks fly, and Eva comes to terms with her residual guilt fairly quickly (and heathily).

For a pathbreaking book, Adam and Eva wears its multiculturalism lightly. The reader knows immediately from the text that Eva, Diane, and Adam are African-American, but we’re not hit over the head with it. I wasn’t sure of the race of some of the minor characters, perhaps because it didn’t seem to matter for the story (and I don’t know enough about the Virgin Islands to fill in the ambiguities). I didn’t notice any instances where skin color was described with reference to food, but little things, like Eva’s skin darkening under the tropical sun, rang true, as did Kitt’s description of the ferry passengers going from St. Thomas to St. John:

Eva took a moment to look around the small craft, noticing the mixture of people. There were those who were obviously just arriving for the start of vacation, with their pale untouched skins, and those who lived on these islands with their beige, brown, and black skin tones.

I really liked the ending. Adam stops being an ass and admits his past stupidities, but he doesn’t do an over-the-top grovel. They find a solution that allows them both to pursue their career interests while being together and incorporating Diane into their lives more fully. Everyone makes compromises they’re comfortable with and no one seems to be keeping track, which is my favorite kind of happy ending.

I read quite a few older books, so other readers may find more character traits and story attributes that jerk them out of the romance. But I think that for a 30+ year old book, Adam and Eva holds up amazingly well. In 2010 Kitt published a sequel, Promises in Paradise, which features Diane, and it has jumped directly onto my TBR. Grade: A-