REVIEW: A Night of Scandal by Sarah Morgan

I’m always on the lookout for a new book by you, and when I saw that your latest Presents release was the first of a new series featuring a number of prominent authors, I was hooked at once. Released as the Bad Blood series in the UK, the Notorious Wolfes comprise eight books about the Wolfe siblings, all of whom were fathered by the same rich, powerful, and dastardly father. After a traumatic childhood and adolescence the Wolfes have scattered all over the world, and Nathaniel Wolfe, the hero of A Night of Scandal, is a Hollywood film star. We meet him on the opening night of a new theater production of Richard II, in which he plays the title role. But as the curtain rises, Nathaniel sees someone in the audience who freezes him in his tracks and makes him unable to go on. He rushes from the stage and runs into Katie Field, the wardrobe mistress for the production and our heroine. He hides out from the paparazzi in Katie’s modest flat, but when they are quickly and inevitably discovered, he arranges for them to be flown to Wolfe Island, where he can get away from the press and the shock he faced across the footlights. Katie refuses to go with him at first, but Nathaniel bribes her with the promise of introductions to famous costume designers who can advance her career. 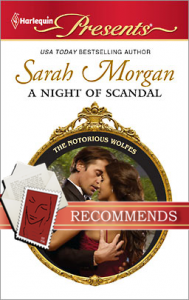 Katie is the antithesis of the usual women in Nathaniel’s world: she is cheerful, friendly, and built like a normal woman rather than an actress. She describes herself as one of the padded types with no visible hipbones. She has had a crush on Nathaniel for years, but she can’t believe he could possibly have any interest in her. With a sister who is a tall, impossibly thin supermodel, Katie hates being photographed and won’t even put pictures of herself on her Facebook account. As is often the case with these types of heroines, she is a breath of fresh air for Nathaniel, who finds himself immediately attracted to her nicely padded body and bemused by her sunny optimism. On the island, Nathaniel broods and makes phone calls while Katie works on a portfolio and befriends the staff.

Since our hero and heroine spend much of their time running from publicity, there aren’t a lot of supporting characters who are physically present. But since this is also the first book in a series there has to be a fair amount of setup. The editors at M&B were smart to ask you to do the heavy lifting here; you introduce a complex backstory without info-dumping, and the reasons behind Nathaniel’s bolt from the stage and his complicated relationships with his family members are skillfully introduced. Katie has a crush on Nathaniel when we meet her (who wouldn’t, frankly), but you have to show Nathaniel becoming interested in this very ordinary girl fairly quickly, and for the most part I was convinced. Katie’s insecurity about her looks are humorously but sympathetically presented:

‘You were in the bedroom for ages. What were you doing?’

Her cheeks reddened. ‘I was staring in the mirror feeling about the size of a spec of dust because I had Alpha Man in my living room and I was looking like something that had been pulled through a hedge backwards.’ She rubbed her hands over her knees in an agitated movement. ‘You want to know what I was doing in the bedroom? I was wishing I was someone else—like a beautiful, long-legged actress-model-type, someone with visible hip bones who wouldn’t have been phased [sic] to be entertaining Hollywood royalty.’

Distracted, Nathaniel looked at her in bemusement. ‘Visible hip bones?’

‘Yes. Skinny women always have visible hip bones. I’ve tried for years to get visible hip bones but frankly I like food too much to starve myself and it can’t be natural to go round with your stomach rumbling the whole time, and normally I’m fine with the fact that I have hips and a bottom, but last night I let myself be intimidated by you and I hate myself for that because underneath that handsome face you’re just an ego on legs who thinks that everything in the world is about him-‘

As Katie and Nathaniel spent time together in different settings, I could see why Nathaniel started to fall in love with her. Katie is cheerful and optimistic without being too annoyingly perky, and despite her insecurities she seems basically to like herself. In other words, she is not a doormat. This is a classic opposites-attract story and the reader follows the process by which Katie’s crush becomes a deeper attachment and Nathaniel starts to allow Katie to get closer.

Nathaniel is a terrific hero. He is, of course, handsome, intelligent, and accomplished. He is also authentically tortured; his childhood was marked by a couple of deeply traumatizing events, and his relationships with his parents and his siblings continue to be shaped by those childhood traumas. He uses his acting training and experience to mask his inner self and emotions, but Katie sees through this fairly quickly. As Nathaniel grows more comfortable with her, he allows his real feelings to emerge, even when they are conflicted and painful. The contrast between Katie’s down-to-earth, everyday approach and Nathaniel’s dramatic history and movie-star existence becomes less important as each sees beyond the other’s obvious personality traits to their underlying characters. I really appreciated that they don’t fall into bed immediately, and when they do, it still takes time for them to become really open and trusting with each other.

The book ranges from London to Wolfe Island to Rio to the Wolfe estate in England, and each location provides more insight into Nathaniel and the Wolfe family. By the end of the book we have an HEA for Nathaniel and Katie, as well as a sense of where the next books will take us, especially with regard to the oldest Wolfe sibling, Jacob. His story is woven through the first seven installments before taking center stage in the final book of the series.

A Night of Scandal marks a strong beginning and sets a high standard for the Notorious Wolfes series, and I encourage readers to join the upcoming discussion of the book at the Smart Bitches later this month.  I also look forward with great pleasure to reading the other siblings’ stories.

Note: Since this book is part of the Smart Bitches Sizzling Summer Book Club, you can get it at All Romance eBooks for 50% rebate using “SBTBARE” until July 15.

→ Sunita
Previous article: Everything You Wanted to Know About Digital Publishing But Were Afraid to Ask. A Q&A with Maya Banks
Next Post: Monday Midday Links: Sex Is Dangerous