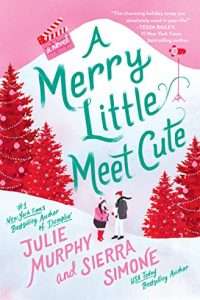 “…a steamy plus-size holiday rom-com about an adult film star who is semi-accidentally cast as a lead in a family-friendly Christmas movie, and the former bad-boy pop star she falls in love with.

Bee Hobbes (aka Bianca Von Honey) has a successful career as a plus-size adult film star. With a huge following and two supportive moms, Bee couldn’t ask for more. But when Bee’s favorite producer casts her to star in a Christmas movie he’s making for the squeaky-clean Hope Channel, Bee’s career is about to take a more family-friendly direction.

Forced to keep her work as Bianca under wraps, Bee quickly learns this is a task a lot easier said than done. Though it all becomes worthwhile when she discovers her co-star is none other than childhood crush Nolan Shaw, an ex-boy band member in desperate need of career rehab. Nolan’s promised his bulldog manager to keep it zipped up on set, and he will if it means he’ll be able to provide a more stable living situation for his sister and mom.

But things heat up quickly in Christmas Notch, Vermont, when Nolan recognizes his new co-star from her ClosedDoors account (oh yeah, he’s a member). Now Bee and Nolan are sneaking off for quickies on set, keeping their new relationship a secret from the Hope Channel’s execs. Things only get trickier when the reporter who torpedoed Nolan’s singing career comes snooping around—and takes an instant interest in mysterious newcomer Bee.

And if Bee and Nolan can’t keep their off-camera romance behind the scenes, then this merry little meet cute might end up on the cutting room floor.“

What a delightful surprise this book was! The blurb gives a really good overview of the story – it really is a case of “says what you get on the tin”. I’ve come to look askance at most books labelled “rom-com” – too often they’re filled with very heavy topics and aren’t all that funny (at least to me). I tend to go in thinking of a book as a straight up contemporary and if I get a laugh out of it, I call it good. It helps to manage my expectations.

A Merry Little Meet Cute does fall squarely into the “rom-com” genre however (bearing in mind that humour is subjective not universal). There is some slut-shaming, some fatphobia and misogyny and Nolan’s mother has bipolar disorder so there is also mental health representation. But they’re handled with a fairly light touch. I found the mental health representation very positive:

It was the cruelest thing about bipolar disorder, I thought; there was never one thing that worked forever. No one med, no one dose, no one routine. My mom said it was like walking on a rope bridge, where every step was slightly different from the last and sometimes you had to stop and just hold on until you could find your balance again. But she also liked to remind me that sometimes the views from her bridge were incredible too.

Bee Hobbes (aka Bianca Von Honey) is a sex worker and adult film star. She has a “ClosedDoors” account (which I understand to be something like OnlyFans) and many loyal subscribers. Happily, her work at Uncle Ray Ray’s (the adult film production company) is not at all predatory and she has freedom to choose her work and keep her ClosedDoors account (and all the income that generates) without any threat from the owner, Teddy Ray Fletcher. Bee was not forced into porn; she’s happy with her career; she even has the support of her parents, but she also realises it has a use-by date.

Teddy has two adult children he’s trying to assist – one through an expensive art school and the other with her line of eco-friendly sex toys and this stuff is EXPENSIVE. So he’s decided to branch out into wholesome Christmas movies for the Hope Channel (think Hallmark). The book hilariously points out the genuine similarities between porn and Christmas movies. Teddy’s kept the two production companies very separate and his plan is that the streams will never cross (yeah, like that’s gonna happen Teddy). He needs the money and he knows that the Hope Channel will not approve of Uncle Ray Ray’s.  Unfortunately, his plans are thrown into disarray when two days prior to production his female lead and a number of the crew are injured in an “UnFestival” accident and he needs to recast immediately or miss the filming window in Christmas Notch, Vermont.  A series of unfortunate (or fortunate?) events occur and Bee is cast in the lead (she has always wanted to act in mainstream media) and other crew from Uncle Ray Ray’s are co-opted to help on the film as well.

Bee is sworn to secrecy. Bee is to be as pure as the driven snow (she has a list of instructions, most of which can be boiled down to “no fucking”). There is to be no hint of Bianca Von Honey in Vermont and the Hope Channel and everyone else involved in the production (including the director) are not to know about her other career.

As it happens, Nolan knows Bee instantly – he’s a “Honey Pot” level subscriber to her ClosedDoors channel and a devoted fan. But his agent has warned him – keep it in his pants and don’t get into any trouble or she will, literally, have his guts for garters. Given Nolan’s pre-existing attraction and the reality that is Bee, this is extremely challenging.

I couldn’t fuck this up.

As Bee was looked over one final time by the hair and makeup artists—and Pearl reemerged from a centering meditation somewhere—I popped a breath mint and tried to imagine I was the duke. A Hope Channel duke who’d never had sex and who never thought about sex and who’d never even seen two horses doing it in a field or whatever.

The duke of no boners. The softest duke who’d ever softed. That was me.

As a young teenager (and still) Bee had a major crush on Nolan Shaw from boy band INK. Working with him is a dream come true. We therefore have a couple who are prone to attraction from the very beginning and who have very good reason to stay away from each other. It’s delicious. (Also, they don’t manage this very well – happily for  me!)

Bee shook her head, dropping her hand from my face so fast you’d think my jaw was made of exploding phone batteries.

The story is also extremely sex and sex work positive which I loved.

It didn’t bother me that she was sharing her body; even if I hadn’t known about her sex work, my own sexual history was hardly a study in monogamy. But knowing that she might be falling for someone else, that someone else might be making her light up with laughter and might be occupying her thoughts . . . that imaginary person I was jealous of.

I loved that Nolan had no issues with Bee continuing in whatever career she wanted after Duke the Halls wraps.

My major criticism of the book is that despite this, Bee ends up not doing more sex work afterwards. At least she does this for her own reasons and not because she’s ashamed or due to any kind of pressure from Nolan but I really would have loved her to continue it for at least a little while – there is so little of that kind of representation in romance. It would have been nice to see.

Added to that, consent was also a focus (both in Bee’s work and in Nolan’s and her relationship) and the way it was presented when it came to sex between the love interests proved (not that I needed proof) consent is sexy:

I dragged in several breaths to claw back some control, although I didn’t stop fucking. I couldn’t stop. Short of Bee telling me to knock it off, nothing could have stopped me from sinking inside her over and over again. The literal bed could have been on literal fire, and I still would have been there, pumping into my girl like a man possessed.

Both Nolan and Bee are openly bisexual and the bi representation was also very positive.

You did a great job of making me wonder how a HEA could possibly happen and then, when it did, of making it entirely believable and not as difficult as I thought it might be.

The characters are endearing, some quirkily so, and well-fleshed out. The story moves at a good pace with no real slow points and I pretty much felt good all the way through. I knew from the prologue I was going to enjoy this read. (I suspect those who won’t will also know from the prologue – humour is subjective after all.)

Those who are not sex positive will not read this book – it will not be their jam – but I have a feeling that this book will hit the spot for many who are (the sex puns are impossible to avoid I’m afraid – as readers will find should they read the book).

I only had two issues with the book. One I’ve hidden behind a spoiler tag above. The other is that epilogue is from Teddy’s POV, just like the prologue. While it’s a nice bookend to the story I’d have preferred a little more of Bee and Nolan. However, those things are minor in the big scheme of things and A Merry Little Meet Cute is a book I’m happy to recommend.