I don’t remember reading a book like this lately. I’m sure that there have been ones written, after all, romance has been published for decades at a clip of several hundred a month. There are no new stories, only new ways to tell them. However, Marta Russell and Theophilus Mirkwood are two characters that seemed entirely new to me; characters I hadn’t met in fiction before. 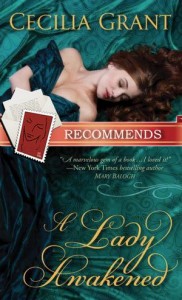 This story read to me about two things: connections and opposites. Connections, particularly in this book, prevent seeing the world in black and white, seeing one person as wholly villianous or virtuous. The way in which the connections to people make us better and how, left to our own devices, our viewpoints and life experiences can be narrow and limited. The best part of an opposites attract story is this idea that the other can fill in where one is lacking, making the duo better than an individual. That is definitely true in “A Lady Awakened”.

The story is fairly simple. Martha Russell of Seaton Park is newly widowed and she is childless. While she regrets that she doesn’t have a child and that she will likely have to go and live off her brothers, she is prepared to do so. Her plans are forestalled by suggestion of her lady’s maid and the local clergy that everyone will need to wait to see if she had quickened before her husband’s death. The seed of fraud is fostered when Martha hears that the heir is a disreputable man who had taken advantage of the servants of the house many years ago and that her husband had shunned the heir prior to his death.

Martha learns that Theo Mirkwood has been sent down by his father after an escapade. She propositions Theo and offers to pay him money to father her a child. Theo is bemused but he is in need of money and impregnating his neighbor seems like a jolly way to pass the time until he is forgiven or he has enough money to return to town. Martha and Theo don’t think much of each either. Martha isn’t the merry widow that Theo would like her to be and Theo is far to reckless and irresponsible to appeal to Martha. Theo thinks quite a bit of his sexual prowess but Martha is unimpressed:

He was watching her, hands on his hips, satisfied to be the object of a lady’s scrutiny. “It’s all yours, darling, bought and paid for,” he said with what was probably a rakish smile.

What on earth did one say in reply to that? It wasn’t even accurate — she hadn’t paid him yet — but really, the less said on this subject, the better. Yesterday had been rather excruciating in that regard. Your skin is like silk. You smell like flowers. He must seduce chiefly on the strength of his good looks. He couldn’t expect to overcome any lady with poetic invention.

As the two spend each afternoon in bed, they begin to learn more about one another. Martha learns that Theo’s easy amiability makes it easier to connect with the tenants, to assist them in the manner in which Martha believes is important for the gentry to do. Theo learns from Martha that taking care of the land and tenants is more than a responsibility but a calling.

In reading the negative Amazon reviews, one of the negatives that is brought up is that Martha is engaging in a fraud. She is. She is trying to steal an inheritance from another person who is rumored to be a bad man. This is not without its troubling morality and is an issue that Martha acknowledges, even unto the end.

Another negative comment was that Martha is cold. She is. She is distant from others. She does not make friends easily and her lack of ability to make connections pushes her to further withdraw emotionally. But she is earnest in her desire to provide for those people around her. She feels their reliance keenly. Moreover, Martha recognizes the perilous position of a woman and seeks to set up a school wherein girls can gain an education, empowering them. Theo is distant as well, for all his amiabiity. His connections, while easily made, are superfluous.  Martha and Theo are subtle ends of an emotional spectrum.  Theo was undisciplined, but generous.   Martha was uptight, but thoughtful.

There is this great subplot involving Theo and a single laborer on his property. He learns that because the man has no family, when the man is older and can no longer work the tenant properly, he will be sent to a workhouse. It brings home to Theo how fortunate his birth and what kind of responsibility he holds in his hands. Theo has the ability to prevent Mr. Barrow from being sent to a workhouse. Theo’s transformation doesn’t come at the hands of Martha. She merely opens his eyes.

“The smaller families with older sons are fortunate,” he said as he and Granville moved along. “Two or more wages, and fewer people to divide them among.”

“The shape of your family makes a great difference, doesn’t it? I’m sorry the Weavers have no grown-up sons.” They were walking a path that followed a rail fence now, and from time to time the man rapped at some part of it, presumably to test the soundness of its joints.

“Mr. Barrow has no family at all? Not even nieces or nephews, I mean?”

“No.” This brought an extra gravity, he could see, to Granville’s weathered features. “He had sisters, I know, but they married long ago and settled somewhere far north.”

“No one to take an interest in caring for him, then.”

“It’s not as uncommon a case as one might like it to be. Reminds a man of the importance of marrying. Not a man of independent means, of course — you may look after yourself and then pay others to do so, if you choose.”

This sounded a dismal prospect. He must remember to think seriously of marriage, in five or ten years, and in the meantime, to ingratiate himself with his sisters’ children. “But Mr. Barrow,” he said. “There will come a time — soon, perhaps — when he can no longer earn a wage.”

“Aye, and after that, a time when he cannot keep house, and a time when he cannot care for himself.” Granville stopped, having found a place in the fence that did not make the proper reply to his knock. He rapped at it again, and then took out a pencil and a folded bit of paper to make some note.

Theo waited. “What happens to such a man at that time?” he said when the agent had finished.

He shook his head without looking up. “If a man does live to that age, and has no connections, like as not he ends in the workhouse infirmary.”

“Workhouse.” The one word was all he could manage.

Another negative is that the sex that Martha and Theo have is quite unsexy. This is also true. Martha hates sex initially. So much so that by the third coupling, Theo is having a difficult time even becoming aroused. The sex is actually a source of humor but it provides a marker for Martha and Theo’s intimacy. Initially the sex is horrible because neither have any feelings for another. As the two begin to like each other, the sex becomes better (although Martha begins to feel guilty about this) and then when the two fall in love, intercourse becomes both pleasureful and painful. Sex is almost a chore for both of them, something to get through in order to get to the good stuff which is the talking that they do after sex and the intimacy that grows between them because of the post coital discussions.  The sex in the book ranges from awkward to erotic, a range that I’ve rarely seen in one book.

I just appreciated so much watching Theo and Martha change, subtly, into better versions of themselves. How they found in each other something of value. There are so many wonderful small scenes in the book such as Theo watching Martha’s interaction with the vicar and thinking to himself that he wanted to see that look of admiration and respect on Martha’s face directed toward him. Or Martha learning how to make friends with Theo’s assistance.  The one small part of the story that I felt wasn’t as well integrated was Martha’s desire for a school for girls. I wasn’t convinced that her school would provide the empowerment that she desired and it lacked the flavor of the tenant / land management issues in the book. I also thought that the first three chapters started off a bit slow and I worried that Martha would be preachy and insufferable for the whole book (she’s not at all).

I don’t think I can really convey how amazing this book is. I hope people just give it a chance. Read the first chapter in the store. Take advantage of the “Sample” feature for ebookstores. It’s worth that small effort to see if the book captures a reader’s attention. I was captivated from the first chapter. A-

→ Jane
Previous article: The Entitled Reader
Next Post: REVIEW: How the Marquess Was Won by Julie Anne Long