REVIEW: A Kiss for Midwinter by Courtney Milan

I hope you are having a lovely holiday season. This year, as in 2011, you enriched my December by releasing a stellar Christmas tale. A Kiss for Midwinter is not quite as brilliant as This Wicked Gift (mentioned here in my list of favorite holiday stories) but it’s still wonderful. Thank you. 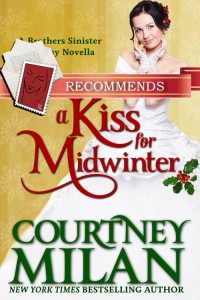 The heroine of your novella, Miss Lydia Charingford, is the best friend of the heroine in your latest novel, The Duchess Wars. It was clear, when I read The Duchess Wars, there was a romance brewing between Lydia and the town’s young doctor, Jonas Grantham. Jonas was my favorite character in The Duchess Wars. I have a weakness for accurately written medicine men in romance and a loathing for those who are poorly rendered. In A Kiss for Midwinter Jonas is my dream physician: he’s a superb, conscientious, thinking practitioner and a hell of a guy. You write in the addendum to your story that you “have always been fascinated by the history of medicine.”  You’ve clearly researched early Victorian medicine and the facts behind your story give the tale a realistic resonance I loved.

As the novella begins, it’s 1862 and Jonas is newly returned to Leicester. He grew up there, the brilliant only child of a scrap metal man; Jonas’s mother died when he was five. Jonas has been gone from Leicester for many years, first away at school, then studying medical instruction in London for three years. The last time he was home, he’d had a horrific experience in which he watched the town’s then doctor, Parwine, treat a fifteen year old pregnant girl with verbal malice and heinous medical malpractice. Jonas couldn’t stop Parwine, but the experience shaped him significantly. Now back home, he’s taken over Parwine’s medical practice and is ready to find a wife and settle down. He’s made a list of the ten prettiest single young ladies in Leicester and he plans to speak to each of them in hopes that one will suit. The young ladies are, in general, quite interested in Jonas. He’s handsome, tall, and makes a good living. Jonas knows he’s not perfect. As he explains to a friend,

“I’d rather cast my net broadly than miss altogether. And, as it happens, I have a few defects in my character.”

For instance, he was fairly certain that his list of local beauties, arranged by degree of physical attractiveness, was not something that members of the opposite sex would find particularly compelling. Also, he had decided it would be best not to mention his main reason for wanting to marry—that he thought it expedient to procure a regular source of sexual intercourse without risking syphilis.

There is a young lady Jonas sees at church who is not on his top ten list–she’d be eleven–who he decides he should at least talk to in case she improves upon closer inspection.  He manages to get her on his arm for a walk in a park a few days later and finds that not only is she definitely number eleven, she’s also unpleasant to talk to. She won’t look him in the eye and returns all his conversational sallies with monotone answers. Jonas finally loses his temper with her and is shocked at her response.

Her terse responses brought out the devil in him. He’d not been lying when he said he had a few defects in his personality. He turned to her and spoke with no effort at politeness. “Did you know that before I spoke this sentence, you had uttered twenty percent of the words in the conversation? Now we are much closer to ten percent. It won’t do, Miss Charingford. It won’t do.”

Beside him, she tilted her head. “Won’t it?”

He clenched a fist, annoyed beyond measure. He’d used up his rather limited store of polite conversation already, and she wasn’t even trying. In fact, she was looking up at him resentfully.

“I’m thinking that?” He wrinkled his nose.

She looked about, as if to verify that nobody was nearby. “That because you know of my faults, of what has happened to me, that I’ll be susceptible to your blackmail and flattery.”

“Blackmail!” he repeated in surprise.

“I don’t care what you think of my moral decay,” she hissed. “I am still alive, and I intend to remain so. I refuse to be ruined. If you try anything, you’ll be sorry.”

It was the look on her face that sparked his recognition—that defiant, accusing glare directed at him once more. It made him catch his breath, remembering the girl from five years ago. He’d worried about her after he left. Every time he’d seen an unwed mother or a prostitute in those intervening years, he’d wondered what horror his silence had brought to her.

And in that moment, as Jonas stares at Lydia, seeing the girl he’d thought destroyed, so alive and so vibrant, Jonas’s list shrinks to one.

Sadly for Jonas, Lydia can’t stand to be near him. Every time she sees him, she remembers the horror of what happened to her five years ago. She’s sure Jonas judges her–he’s the only one living in town other than her parents who know her secret–and when she sees him, all she can see is someone who sees her as so much less than she’s determined to be. Sixteen months pass from their walk in the park, and now, it is two weeks before Christmas. Jonas’s life is breaking his heart. His father, Lucas, is dying and losing his mind in ways that put both Lucas and Henry, the young boy who cares for him, at risk. His love for Lydia has prevented him from marrying any other young woman and Lydia makes it clear every time he talks to her that she dislikes him profoundly. And, no matter how hard he works, he can’t save his indigent patients from the horrors of 19th century poverty.

So, in one last attempt to show Lydia the man he is rather than the man she insists on seeing, he makes her a bet. One of the things he loves best about her is her unflagging joyousness in the face of all the sadness life contains.

“I wager,” he said, “that I could show you a situation before Christmas that would be beyond even your capacity for good cheer.”

She frowned. “What do you mean?”

“I see the worst of Leicester. In five minutes, I’ll leave for my next appointment. You smile and you wish and you see an entire world set forth in the most optimistic terms. I wager that I can find you a situation that lacks a bright side.”

He didn’t have fastenings, but he did have his version of it—house calls.

She mulled this over for a few moments. “What do you get if you win?”

“We’ll get to that in a moment, if you please. The more salient question is, what would you wish if you win? You could ask me for any favor. You could make me stand on my head in the market square for twenty minutes, if you wanted. Think, Miss Charingford, of all the ways you might humiliate me. Surely that would be worth something to you.”

She frowned and tapped her fingers against her lips. She didn’t look at him as she thought; she just tilted her head and narrowed her eyes. Finally, she gave a nod. “What if I said I wanted you never to talk to me again?”

…“And what humiliation will you heap on me if you should prevail?” Miss Charingford asked.

Thus begins the true courtship between Jonas and Lydia. He takes her to visit his poorest patients, saving the most tragic for last. And she, rather than see only the tragedy, shows Jonas hope and joy in every home. Furthermore, as she spends time with Jonas, she begins to question her convictions about him and her past.

Just about everything about this novella is perfect. If I made a list of my top ten favorite romance heroes, Jonas would be on that list. (Hey, there’s a blog post for the New Year!) Jonas is a great doctor and man–his compassion for humanity extends to everyone but himself and his belief that he can always do and be better makes him so appealing. His wit is sly and lovely and he’s breathtakingly open about how he sees himself and the world. At one point, in order to avoid having an honest conversation with him, Lydia sings all of “The Twelve Days of Christmas.” Jonas tolerates this almost to the end and then interrupts.

“Who wants lords a-leaping?” he asked. “If my true love brings me any number of lords shambling about in their cups on Christmas, I’ll have words for her. Someone’s going to break a bottle and cut his hand, leaping about like that, and then guess who’s going to be roused from his warm home on the holidays to stitch him up? ‘Oh, Doctor Grantham, you’d best come quickly!’” He made a rude noise.

Lydia is a marvelous match for Jonas. She’s lived all her life in Leicester and is, a twenty-one, determinedly unmarried. She knows there is pain, cruelty, betrayal, and sorrow all around her–and starkly in her past–and she responds by seeing more than that. She seeks out the best in the world, determined every day to prove to her and to those around her that life’s joys outnumber its woes. And, though her behavior is, in part defensive–it enables her suppress her emotions about what happened to her five Christmases ago–it’s still beautiful and kind. She, like Jonas, every day makes the world a better place for those around her. My only complaint about her–and really, my only complaint about the novella–is that she holds on to fear for longer than seems necessary.

A Kiss for Midwinter is so well done–Ms. Milan would do the romance world a great favor if she’d share her secrets for how to write an ideal novella. In the 131 pages of this e-book, Ms. Milan offers readers a wholly rendered love story complete with history, fully realized characters (primary and secondary), and a genuinely joyful happy ending. (The very last scene of the novella is one of the best I’ve encountered in some time. I think first-rate endings are rare–Ms. Milan has given readers one in this charming holiday story.) I give A Kiss for Midwinter an A-.

Happy holidays to all and good wishes for the New Year!