I remember reading “No Place Like Home” by Barbara Samuel and just sobbing. My husband is lying next to me and looks over suspiciously and says “are you crying?” and I replied, “no, I think I have a cold.” Thankfully I was in a different room when I read this book because I don’t know how many times the “cold” thing will sell. It’s not really the type of book to bring on the waterworks as most of the story is humorous and wry, but there were portions that made me sniffle as I watched two people rediscover what made them fall in love in the first place. 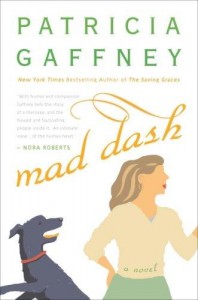 Dash Bateman is having a mid life crisis. She just lost her mother. Her daughter is leaving for college and every little thing that her husband does seems to grate on her last nerve. So Dash does what every married woman who has a cabin would do and that is runs away to live there in a “we’re not separated but we are trying to find ourselves” manner. Andrew, unaware that their marriage is on rocky ground, is surprised, hurt, angered, frustrated and then determined to move on.

The story is told from both points of view, Andrew and Dash, and the “he said/she said” dichotomy was brilliantly displayed. Andrew felt diminished next to the vivacious, outgoing Dash. “Before she left, I felt like I was shrinking. Dash got bigger, I got smaller.” A sour laugh. “The incredible shrinking man.” Yet, some of Dash’s personality was a fraud. Dash describes herself as “parchment, sheer as gauze.”

I think that reading the struggles of Dash and Andrew, trying to find out their places in the world and their meaning to each other is kind of that “every person” experience. Dash, and Andrew because Dash leaves him, begin to wonder for a small time that there might be something else, someone else out there that is more fulfilling. Dash says at one point, certain of her advice to a young girl who is thinking of getting married and settling down, “I’m right. I see it so clearly. Why can’t she?” As if Dash KNOWS that there is better out there and if she just went out there (wherever there was), she would find the panacea for her discontent.

Ultimately Dash realizes that fear is what is driving her and that the greatest challenge was to recognize the value of what she had. Andrew understands that his “shrinking man” experience had less to do with Dash and more to do with himself. The unique thing in this story is that both characters actually grow and better themselves. This book ends happily, much to the chagrin of the Publishers’ Weekly review, but for me, it was perfect. A-

This book is a hardcover and can be purchased August 7, 2007.