I’ve been in a reading slump for a while so when I hit on two novellas and one book I enjoyed a great deal, I felt a sense of relief. I haven’t lost my reading mojo after all! I review all three below:

The protagonist of this Nebula winning 96-page science fiction novella is Binti, a sixteen year old girl and the first of the Himba people to be given a scholarship to study at Oomza University, which is located on another world. 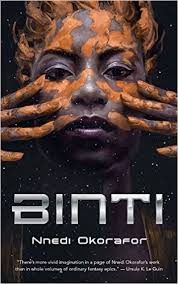 Binti’s family does not want her to attend the university, but she leaves anyway. “My prospects of marriage had been 100 percent and now they would be zero,” she thinks when she arrives at the launch port. But Binti yearns to learn what her studies at the university can teach her.

At the launch port, Binti endures ignorant, snobby comments from a few of the Khoush about her otjize, sweet-smelling red clay with which she, like other Himba, covers her body and plaits her hair. She turns her back on them, but their comments upset her.

Binti has brought with her an edan, an ancient device she found in the desert. She boards Third Fish, the ship that will take her to Oomza, and on it she befriends other students traveling to Oomza.

Eighteen days into her journey, Binti is having lunch with her new friends when the ship is invaded by the Meduse, aliens who are an old enemy of the Khoush. They kill everyone else aboard, but somehow, the edan Binti carries with her protects her.

Binti barricades herself in her room, but the food and water she brought with her is bound to run out. Binti will have to use everything she has, from her edan and otjize to her mind and her heart, if she is to survive—and to save the people at Oomza University, toward which the Meduse-filled ship is heading.

This is a terrific novella that blends old traditions with alien concepts and touches on how, when we leave our society and culture behind for a new culture, we are altered in ways that cannot be undone. For Binti, this is not only a loss, but also a gain.

Without spoiling the way Binti arrives at her happy ending, I will say that she was a lovely heroine, going from fear to courage, from shock to resourcefulness. The story explores what is familiar and what is alien to us, and how it is possible to build bridges with bravery and goodwill.

I enjoyed it a lot and only have a couple of minor caveats. I didn’t understand the way math worked in the story, and if there were political consequences to the Meduse’s killing of the other passengers of Third Fish, these were glossed over, when I wanted to understand them better.

The novella brought tears to my eyes because of all Binti risked, and because of the way her triumph altered her. It also ends on a high note; the last scene was absolutely lovely. B+/A-.

The Duke of Olympia Meets His Match by Juliana Gray

I read this 126-page historical romance novella shortly after Jayne reviewed it and enjoyed it immensely. 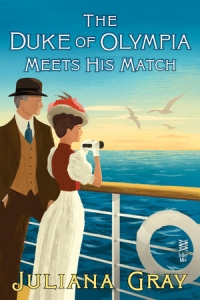 The plot centers on an ocean voyage, matrimonial ambitions, and espionage. The hero of the story is the Duke of Olympia, 74 years old (you read that right) and widowed, as well as something of an English spy. He is traveling aboard The Majestic, a White Star Line cruise ship, to retrieve some papers dealing with an anarchist plot from an agent of the French.

Also aboard ship is the heroine, Penelope. She is in her fifties, also widowed, and a chaperone / companion to a wealthy, twenty year old American beauty, Ruby. Penelope was born to old money but her family fell on hard times and for the past two decades she’s depended on the kindness of people in her old circle for her livelihood.

Penelope is attracted to the duke, just as he is to her, but her employer, Ruby’s mother, has her heart set on a match between the duke and Ruby. Penelope can’t afford to be a spoke in the wheel of such a courtship – if she offends her employer she’ll lose her position, and she has no other means of supporting herself. It’s from here that both the romance and the spy plot take off.

I had not read Juliana Gray before, just the first of the author’s Beatriz Williams books, Overseas. While I liked Overseas mildly, I thought this one was much, much better. A lot of this owes to the writing style, which has a great deal of panache.

In the comments on Jayne’s review, commenter Dora described Gray’s writing style as “high comedy, a bit stylised, a bit brittle, like an Oscar Wilde play,” and I couldn’t agree more. I knew I would love this novella early on, when I came across this paragraph:

“True, he doesn’t need a fortune,” said Penelope, still gazing dukeward from the corner of her eye. “But he does need an heir, a proper heir from his own body. Both his sons died early, and the dukedom will pass to a grandnephew, whom nobody knows.”

It was the word “dukeward” that made this paragraph so thrilling. I was so impressed with the humor and confidence with which this author writes.

I loved not just the comedy but also the characters, especially Penelope, who is more than surface appearances would suggest. I loved the way the spy plot and the romance were intertwined and then resolved, with an empowering ending that I did not anticipate.

The whole novella was a delight from start to finish, and I have just two caveats. The first is that the duke is a very spry and youthful seventy-four year old – in one scene he is described as “bolting down the stairs four at a time,” which would have been easier to swallow were he a decade younger.

While I’m gladder than I can say to see a senior character in a romance, I also wanted the duke and Penelope to be just a little closer in age. Overall, I enjoyed this clever and charming novella very much and can even see myself rereading it. A-.

This book has been out for a couple of years so SPOILERS: 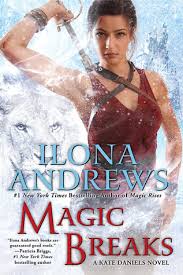 This involves sneaking into the People’s territory with a handful of pack members to investigate the scene of the crime, as well as meeting with danger and mayhem on the way home. Then, when it turns out that the murder isn’t so clear cut as Hugh would have the Pack believe, Kate outwits him, only to find herself teleported to the bottom of a well with only Ghastek for company.

To make matters worse, her sword is broken and she has only a canteen of water for her and Ghastek to share. Can Kate keep her faith in Curran’s return from his hunting trip and herself and Ghastek alive long enough to survive, knowing that if they do, there will still be Roland to confront?

This book was a huge improvement on the previous one and helped me get over some of my frustration with the contrived Kate/Curran conflict that we got in Magic Rises. I loved Kate’s triumph over adversity, the way Curran came through for her, the way she grappled with her need to save her friends and allies, even Ghastek, and the ultimate resolution to her conflict with Roland. There were also some great touches of humor, such as the mammoth donkey she acquired, named Cuddles.

The main thing that bothered me in this book was that early on, Kate is warned “Don’t trust the wolf.” I thought that Jennifer, the alpha of clan wolf, was too obviously untrustworthy and the identity of the traitor would be more of a twist, so I figured it would be Desandra. Desandra was among the group Kate took as backup when she investigated the murder scene, so for about a quarter of the book, I fretted whenever Kate turned her back on Desandra. This turned out to be a red herring but while I thought it was the case, it was a big distraction and a source of frustration.

Otherwise, though, the book was terrific. Kate is an incredible heroine, with so much strength and heart. B+/A-.