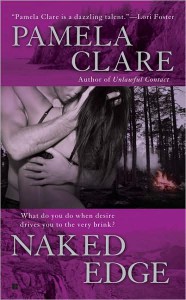 I was given the opportunity to read The Naked Edge several months ago. I was initially reluctant because I have been all over the map with the series. The heroines, in particular, often struck me as foolish. I had some problems with the realism of the stories despite the fact that I know you are an investigative journalist and the stories are based on personal experience and detailed research. Compounding this was the fact that the book featured a virgin heroine, a rake hero, and treatment of a minority culture, Native Americans.

Katherine “Kat” James is an environmental reporter with Denver’s Independent Investigation Team, a prestigious team of investigative journalists.   Kat is half Navajo. Her ties to the Native American community aren’t solely by blood. In fact, her mother and blood family see only the white part of Kat’s ancestry. But because of the influence of Kat’s grandmother, Kat’s belief system is intricately tied to the spirituality of the Lakotas and the Navajos. She is unapologetic about her life choices, including her desire to wait to share her body with someone who also shares her heart.

She willed herself to meet his gaze straight on. “I decided a long time ago that I would never be any man’s conquest, so I don’t date. I’ve never been . . . with a man, and I won’t be until I fi nd the one who wants to be a part of my life and isn’t just looking for a one-night stand. So unless you want lots of children, love mutton stew, and enjoy spending your summer vacations in one-hundred-fourteen-degree heat in a two-room hogaan without electricity or running water, we shouldn’t even start down that road.”

Gabriel Rossiter is Kat’s opposite. He has no belief system. Something in his past shattered his belief in himself and in others. Like Kat, he’s strongly attached to the environment, having been an outdoor enthusiast all of his life and a Boulder Mountain Parks Ranger for the last eight years. About the only thing that Gabriel lives for right now is the adrenaline fix– climbing the impossible mountains, rafting the rapids, and screwing women. His sexual interactions are emotionless. Gabe, it appears, is interested in only Gabe. But this is a front because Gabe barely likes himself; doesn’t respect himself.

When he first meets Kat, he’s attracted to her and begins his pursuit. After acquiescing to have lunch with him, Kat straightforwardly tells Gabe that she isn’t into casual sex and that she is looking for a partner in her life to have a family with. Gabe responds to this by telling her that she is being presumptuous though she is correct in her assessment that he wants to sleep with her and taking her on dates is merely a prelude to that.

Kat has a strong attraction for Gabe and circumstances bring them together as Kat and Gabe begin to investigate the death of her grandfather and the possible looting of artifacts in the Mesa Butte territory. Kat begins to see Gabe’s love for nature, his respect for the tribal traditions, his deference for the elders. Gabe treats Kat like a precious jewel, not by trying to protect her but rather by not pushing her or mocking her beliefs.

I found the story to be very hot, much more so than previous books. I wondered whether this was due in part to the way in which Gabe was depicted and the fact that many of the sex scenes were written from his point of view.

One thing that I really liked was the portrayal of Kat’s Native American heritage. It was not just an issue of ethnicity for Kat, but the traditions and beliefs of the Lakota and Navajo were deeply embedded into her way of life. Both Kat and Gabe treat this is normal. It is not Other to either of them. The culture is presented matter of fact, without foreignness.

As the relationship with Gabe progresses, you see Kat accept that she could be hurt by this man, but there is something she wants and is willing to take the risk. And through Kat’s eyes, Gabe began to see himself as a man of worth, better than he thought himself to be.

The suspense plot is woven throughout the story. As Gabe and Kat begin to uncover more clues, they become targets. This danger to their lives pushes the two closer together in proximity, but I never felt that the danger became the substitute for the two learning the hearts of the other.

The ending is incredibly romantic, filled with an unsuspected villian, true jeopardy, and a big sacrificial gesture. By the end, I was ready for the baby filled epilogue.

There was a lot that could go wrong in this book. Yet, from the very beginning I was drawn in. The characters were rich. The quiet dignity of Kat juxtaposed against the reckless vulnerability of Gabe was refreshing and moving. The portrayal of the Native American culture as something beyond ethnicity into a belief system was tenderly drawn. When I was done with the book, I bemoaned that there was no one to talk about it with.

The story will be out soon (March 2) and I hope that it is received well because it’s a book I’d love to talk about with a group of people. Berkley has volunteered to give away five of these books so that others can read and enjoy before the official release date. This contest will run until Wednesday at 5:00 pm CST so that we can get the books out in the mail right away. Drop a comment to enter.