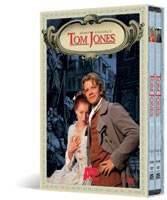 Last month we received an unusual request at Dear Author. We were asked to review something other than a book -‘ a DVD set called "The Romance Collection: Special Edition." The 14 DVD set, which can be found here, retails currently on sale for $49.98 and contains nearly 30 hours of programming (not including the special features) from A&E’s romantic films and miniseries.

People expecting a gentle period piece need to change their expectations. This is a bawdy, full throated, spot on rendition of one of the first novels in the English language. The humor comes in all varieties from subtle to pratfalls. The lessons learned by all might take a while to be brought to fruition but be assured that by the end of the second disc, virtue is rewarded, vice is punished, happiness comes to those who’ve earned it and them what needs thwacking, get theirs.

I’ve not read this book. Having once tried, and failed, to finish “Joseph Andrews,” I wasn’t that keen to give Fielding another go. After watching this presentation, I’m still not about to run out and grab a copy but might, one day, attempt to read “Tom Jones.” So with no plot already in my head, I sat down to watch how Metin HÃ¼seyin would approach the story. The five hour length allows plenty of time to delve into the intricately plotted tale. It could also, depending on your taste, allow the whole thing to plod on too long. However, I enjoyed watching the slower parts as well as the fast paced, farcical moments.

After a quick googling to get the gist of the tale, I can say I think Simon Burke did an excellent job of paring down the plot and number of characters. Some minor characters from the book were eliminated, while a few others such as Lord Fellamar were slightly changed. The basic plot, however, remains the same with the actions of the removed characters being taken over by others. Even with the reduced number of speaking roles, there are still a number of actors/characters to keep straight. Luckily, many of them wear differentiating costumes or wigs which helps. Still, if one has never read the book, a quick cliff notes type review of the story is advised.

The full plot would take too long to type out so here’s a link to a summary. Tom Jones is a foundling discovered in the bed of a very kind, wealthy landowner, Squire Allworthy, in Somerset in England’s West Country. Over the course of 20 some years, Tom grows into a vigorous and lusty, yet honest and kind-hearted, youth. He falls in love with his neighbour’s daughter, Sophia Western which is returned. However while her family likes and admires Tom, they are determined on a match with Allworthy’s nephew, Mr. Blifil. Through a series of events, Blifil gets Tom disinherited and thrown out of Allworthy’s house. Sophia vows never to accept Blifil and runs away towards London.

Squire Western sets off in pursuit, the two lovers encounter scads of other people while managing to always just miss each other, and everyone arrives in London. There, Sophia’s cousin, a Lady of the first quality, seduces Tom and attempts to debauch Sophia. More mix-ups ensue, Tom fights a duel and is arrested on charges of murder. Just when things are at their worst for him, the worst news of all becomes known to him. But since this is a romantic book, all, of course, must end well, as it does after a narrow escape for Tom Jones.

Fielding does have a sense of “young men will be young men and virile young men at that.” Tom gets away with so many things that the world of that era would view with outrage if a young woman tried them. Yet underneath it all, he’s a decent man who gives of what little he has and who always keeps Sophia in his heart. Max Beesley is a fine Tom. Handsome and with a gleam in his eye, he still manages to play the more serious moments and convince me of his ardent love for Sophia.

Sophia at first seems a somewhat insipid young woman of Good Birth. She’s a bit of a snob, really. But then many of the characters are before life lessons are learned. Yet she’s got the strength to stand up to her blustering, bullying father when he’s determined to marry her off. Then run away from him (though with a destination in mind and money in hand) to someone she thinks will offer her sanctuary. Then when her father shows up again, she still tells him no. And she calls Tom on the carpet for his past actions and questions his committment to her for a future together. She’s far from weak. Samantha Morton does a nice turn showing her beauty outwardly this time, unlike her portrayal of Jane Eyre.

I can’t say I’m dissatisfied with any of the actors cast here but there are some standouts. Benjamin Whitrow, one of my favorites in “Pride and Prejudice,” is worthy Mr. Allworthy. Brian Blessed does an earthy version of hunting mad Squire Western. Frances de la Tour is marvelous as his social climbing sister, Aunt Western. Lindsay Duncan makes you love to hate her as the ever so slightly evil Lady Bellaston. John Sessions takes over the written role of the narrative voice. And Kathy Burke became one of my favorite characters, Sophia’s maid Honour.

The production is a visual treat. The costumes, hair styles, and wigs are wonderful. Even though I’d hate to be trussed up in the panniers and corsets, I soaked up the gorgeousness of the dresses. I delighted in the men’s maquillage and elaborate coats. The locations are divine. The furniture, paint colors, candle sconces, bed drapery, coaches and even the darn landscapes are fantastic. Those in charge of these areas truly put their hearts into this. The music is authentic 18 century and the opening score is snazzy and ear catching.

I found this production to be delightful and look forward to rewatching it many
times. I just wish I had understood the Latin phrases tossed around by Mr. Partridge. A-

Purchase link at the A&E store.