I know that you won’t be reading this letter as you are not an onliner, but let me tell you about my love for Dream Man. To some, this is a terrible book filled with a terrible betrayal by the hero. To me, it shows the extent I will overlook things when I fall in love with a story. 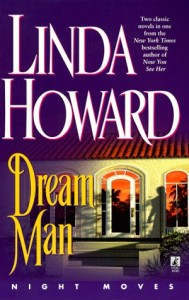 Marlee Keen is a psychic. She can see the thoughts of people around her. The emotional unstable are unusually strong projectors and because of this Marlie could see crimes as they were being committed. After a terrible ordeal in which Marlee was kidnapped and she was forced to watch while a madman violated a young child, Marlee’s psychic ability left her. Marlee found this to be a blessing. She moved to Orlando and began to build for herself “something safe and solid.” She bought herself a nice little house. Got a job at the bank and lived without feeling anyone else’s emotions but her own.

As she is driving home from the movie theater, she begins to have visions of a grisly murder being committed. She is barely able to make it home before she blacks out.

Dane Hollister is a detective with the Orlando police. He has a gut instinct for crimes and is very successful at closing cases. One look at a new crime scene and he recognizes that this isn’t an ordinary crime. Upon arrival at the police station, he finds his superior officer talking with Marlie Keen. Marlie felt it important to report to the police her visions even though it tore her apart. Dane is immediately suspicious and sets out to discredit her only to find himself a believer.

Marlie has enormous strength of character to not only overcome her past trauma but to put herself up for ridicule and suspicion by reporting her vision. She also learns to overcome her ability and that she can live a somewhat normal life, even with her special abilities. Marlie’s strength in herself is never more evident that in the end when Dane betrays her trust.

Dane. What can I say about him other than he talks like a man, walks like a man, and acts like a man. He constantly has a woody around Marlie, even when he doesn’t like her. There is a great scene between his partner and Trammell right after Dane meets Marlie and accuses her of being in cahoots with the killer.

Trammell was right behind him as they walked back to their desks. “What the hell’s the matter with you?” he muttered to Dane’s back.

“Whaddaya mean? You think I should have pretended to believe her?”

“No, I mean you had a hard-on the size of a goddamn nightstick, and you were standing so close, you were about to poke her in the belly with it,” Trammell snapped.

Dane turned and glared at his partner, but he couldn’t think of any excuse to give. He didn’t know what had happened, only that from the minute she had turned those dark blue eyes on him, he’d had a boner so hard a cat couldn’t scratch it. He was still twitching. “Hell, I don’t know,” he finally said.

What I really loved about this book even more than Dane and Marlie was the exquisite detail paid to detective work. Trammell and Dane spent time interviewing witnesses, going through garbage, and alot of other investigative work. It was fascinating to read. And it was scary.

The serial killer stalks his prey and then waits inside their house for them to come home. I remember reading this for the first time at night. I asked Ned if he was going to stay up and read because I thought the book sounded scary and didn’t want to be the only one awake to confront the serial killer in my closet when I was done reading. He promised he would stay awake and vanquish any serial killer in the closet but alas, he didn’t. He fell asleep about 10 minutes later but I couldn’t stop reading. At the end, I was still scared and had to get up and look in my closet. Thankfully no serial killer. But I admit that even today, I still think about those scenes.

And the betrayal? Well, Marlie forgave him and she was a strong woman who knew her own mind so I figured I couldn’t hold it against Dane either.

I am thankful for romances that provide thrills, the scary ones, along with the passionate ones.