My First Sale by Joanna Bourne 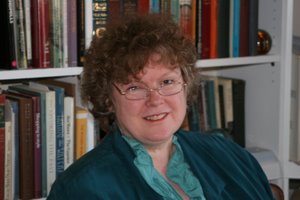 I remember Joanna Bourne first was mentioned to me last summer at the RWA convention in Dallas. I was told that this is an author to watch. Unfortunately the books weren’t going to be released until January so in googling, I found that Bourne had written a book, Her Ladyship’s Companion, a gothic romance in the early 80s. I ordered it and at the time, it only cost me a few dollars. They are now selling for $49.50 and up at Amazon. I think it says something about Bourne’s writing that her first book is now suddenly a collectible. She’s a writer to watch, someone whose work, even on her worst day, makes the historical genre better. Her third release, My Lord and Spymaster, is in stores now.

Oh man. This takes me back. The first book.

It was a sweet Regency with gothic elements … and doesn’t that tell you this was not just precisely recent?

This was the first fiction I’d written.

I pounded it out on a selectric typewriter. There was something called carbon paper … No. I won’t go there. Suffice it to say this was a long time ago and the woods were full of the cries of mating pterodactyls.

Having painfully tapped out the story, (I swear, it would have been faster to crochet the bloody manuscript.) I set out to sell it.

It is difficult to convey the depths of my ignorance. Grand Canyons of naÃ¯veté.. Mariana Trenches of nescience. I had never heard of RWA. I was, in the most vague and distant way, aware that writers could have agents, but didn’t have the least idea how to find one.

Synopsis? I had NEVER HEARD of a synopsis.

Do editorial offices sit around at lunch, snickering at the submissions they get? Do they, like, snigger and say, ‘You will not believe what I got in the mail this morning,’ and giggle over the bagels?

The generous folks at Avon did not point out my small errors. They asked to see the whole. Do not tell me there are no kind hearts in the storied bastions of New York publishing. Certainly they took pity on me.

So I sends the whole manuscript off. I took out a calendar and calculated how long it would take the manuscript to get to New York. Then I figured they’d have two or three manuscripts sitting on their desk they had to read first. Maybe — I stretched my imagination — maybe they’d have five or ten in the queue in front of them. I should hear back in about three weeks. Right? Maybe a month.

Long month for me. Many trips into town to the post office. Much interrogation of patient postal clerks. At the end of the second month I was perfectly certain something had happened to my manuscript. Sea monsters, ravaging New York. Mothra. Train robbers, making off with the mail. Pod people.

“I’ll call,” says I to myself, “and ask.” Grabbing destiny by both ears and the tail, I marched off and called Avon. I asked to speak to the Editorial Assistant. This would be, I knew, a woman of power and competence.

“Hi,” says I. “I’m Joanna Bourne and I sent you in a manuscript …” I consult my notes. They are in a spiral bound notebook. I was — really, things do not change all that much, do they? — clueless, but organized. “Seven weeks ago. It’s –”

“Wait a minute. I’ll … ” Puzzlement in the voice. There was a brief silence.

Then a new pickup clicked on the phone. “I was just about to call you,” the editor says. “Right this minute. We want to buy your book.”

So I never actually got the call. I made it.

I do remember being unable to string together a coherent sentence. Are editors used to filling in the pauses in the author’s, “oh my. Oh my. Wow. Gee. Oh wow …” with small talk? Do editors just take it on faith they don’t have a fumble-minded nitwit on the other end of the line? Certainly I must have sounded like one.

They were willing to pay me money for my writing. Folks would read about the world I’d created and bring my characters alive.

I was flabbergasted and scared and didn’t really believe any of this was real. That hasn’t changed yet, but at least now I’m coherent on the telephone.