Largest Publishers Supply Less Than 8% of Ebook Titles; Achieve 50% of Ebook Sales – Based on a 100+ page report by the expert for the consumers in the price fixing case, Thad McIlroy from The Future of Publishing, declares that while 8% of the titles achieve 50% of the ebook sales that the numbers show an overall decline in traditional publishing dominance.

In the two year period between April 1, 2010 and May 21, 2012, 1.3 million individual titles have been purchased and that Amazon, BN, Apple and Sony account for 98% of all retail ebook sales. That leaves 2% to divide between Kobo, Smashwords, All Romance eBooks, and the like.

I’m not sure I agree with McIlroy’s final conclusion – that ebooks are having a significant role in reducing industry dominance by the largest publishers. He states that in 2004, the top 5 held 65.1% of the market. That large publishers supply only 8% of the ebook titles and achieve 50% of ebook sales doesn’t mean that their market dominance is declining, only that it has achieved 50% of the ebook market. What is their percentage of the print market? Is it lower than 65.1%? Higher? Looking at the publisher position in the marketplace without considering print component is looking at only half the picture and lends itself to faulty conclusions. Thad McIlroy – Future Of Publishing

Texas Man Arrested Over Overdue Library Book – In Texas, they do everything bigger including incarceration for tardy library patrons. A Texas man was booked into jail and then released for overdue GED study guide checked out in 2010. Harsh? GalleyCat 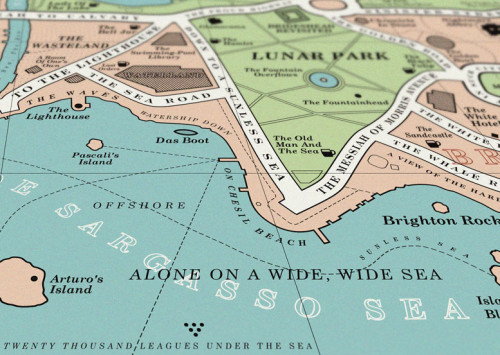 Book Map – Wondering what to buy that difficult person in your life? We are Dorothy has a BookMap wherein they’ve created a fake city with titles from your favorite books like “A Tree Grows in Brooklyn” and “The CandleMass Road”. It’d be fun to do a challenge to read all the places on the map and pin it when you’ve read that place. We Are Dorothy sells all kind of kitschy unique items. Don’t know if they ship to the US though. Buzzfeed

Starbucks turns Twitter into the caffeine delivery system of the future – Facebook has gifts that you can give to other users based upon their “like” habits and now Starbucks brings the ability to tweet a Starbucks gift certificate of five dollars to your favorite Twitter personality. Sign up at the Starbucks website and you’ll be able to tweet gifts all day long or for as long as your wallet holds out. This is both ingenious and dangerous because as we all know, unless we have to type in our credit card or pull out our wallet we aren’t really spending money. Daily Dot

→ Jane
Previous article: Amazon amps up its lures to get indies to go exclusive. Will other retailers respond?
Next Post: REVIEW: Striking Distance by Pamela Clare