I have an 8 book subscription for Harlequin Presents. It’s about $25.00 and I enjoy the sudsy, angst laden stories. Unfortunately I got behind in my reading and reviewing of these. Here’s the July reads for me (I don’t know if everyone gets the same titles their subscriptions?) 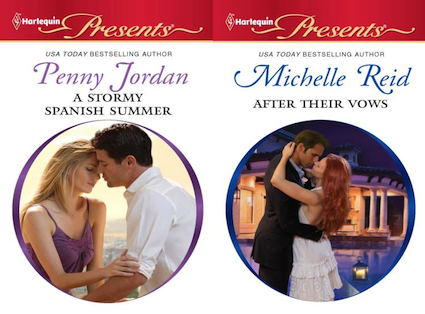 The doormat to asshole ratio is high. The hero, Vidal, perceives the heroine, Fliss, to be promiscuous because he found her in the embrace of a drunken teenager when she was 16. Once a whore, always a whore. Vidal has so little regard for her that at the moment of their copulation:

“I might not be able to control the desire you arouse in me, Felicity,” he told her harshly. “But I am not such a fool as to take the kind of risks with my sexual health that intimacy with you would involve without this protection. You may be the sort of woman who boasts that her pleasure is increased by the danger of unprotected intercourse, but I am not a man who wants to put either my own or my future sexual partners’ health at risk by going down that road. Of course if you’d prefer not to go any further”

Alas, being insulted like this at the point of consummation only makes her more determined to give up her virginity to Vidal. She’ll show him. Oh, Fliss.

And she recognizes this “A woman would have to be bereft of all pride and self-protection to allow herself to feel any kind of desire for a man who treated her as Vidal had.”

There is plenty of angst cake here but it’s at the expense of a truly weak heroine and a, well, mean hero. D

A Night of Scandal by Sarah Morgan

I liked this one although not as much as Sunita. It didn’t have quite enough agnst for me and my enjoyment may have been tainted because of my overall dislike for movie star heroes. Read Sunita’s review here.

After Their Vows by Michelle Reid

This one labored for me. The heroine left the hero because she thought he was cheating. (In fact, this could have been a Helen Bianchin book because the plot was so similar to the Bianchin storylines). She never questioned it and ran off into hiding. A year later she files for divorce and at that point the hero decides to get her back. I never got the feeling that either of the characters loved each other. Angie, the heroine, puts her bad apple brother before her marriage and the hero, Roque, decides the best way to combat that is to lie and blackmail her. When Roque tries to convince Angie of his innocence, she refuses to believe it. After all, the tabloids said it was true as did the supposed other woman. Angie would rather take the word of unreliable sources over her husband, whom she supposedly loved. And, of course, because lust is so strong between the two, Angie can’t keep her hands off Roque or prevent him from carrying her to passionate heights. Blergh. C-

The Wedding Charade by Melanie Milburne

This is a forced marriage story and it’s pretty ridiculous in the beginning. Nic and Jade have to marry or Nic loses 1/3 of the family business. Jade loses her inheritance which she has to have. The why she needs her inheritance is a secret but it’s not for the reason most romance heroines claim to need money (i.e., for a charitable cause). Jade is a fun heroine. She is a mess inside, insecure and mixed up, but she is a likeable mess. She takes people’s assumptions about her and ratchets it up. Nic thinks she is a wicked vixen and so she plays the wicked vixen for him. Everyone in the press thinks she is a man stealer and she does nothing to dissuade those opinions. Jade would rather be all those things than be known for the truth. Problematically Jade’s secret and her continued attempts to keep her secret only feed into Nic’s deep distrust toward her. B-

This is the dogged pursuit of one male, Alessandro, after one hurt female, Lily. Helen Bianchin, to her credit, almost always has a working woman as her heroine. These women work as hard as the men and have high powered jobs. I really appreciate that. The problem in this book is that Lily is purported to be a restauranteur non pareil. Yet she feels comfortable abandoning her restaurant in Australia and going to live with her god mother in Italy for a while after a botched engagement. Lily is described as this incredible chef but has no problem serving as an assistant chef for another chef in an Italian restaurant. Maybe I’ve watched too many Top Chef episodes, but I didn’t buy that Lily was a chef for one instant. The references to her as a chef were distracting and took me out of the story. C

The Ultimate Risk by Chantelle Shaw

Ah, for some reason I didn’t read this one.

The End of Faking it by Natalie Anderson. I recommend this book and I’ll have a full review of it tomorrow. Read less like an HP and more like a straight up contemporary (albeit in category format).

Her Not So Secret Diary by Annie Oliver

This was a cute story but it lacked the emotional charge I was looking for from an HP. Yes, I know this was initially a Riva title, but I only discovered this after I read the book. Sophie accidentally sends a hot fantasy about her boss to her boss, Jared. Man, that retrieve email feature never, ever works. I give credit to Sophie for actually showing up to work after accidentally sending her boss the wrong attachment. She was a temp. I think I would have called the temp office and asked for a new assignment. Stat. B-