Unlike shounen, shoujo, or BL, josei is one of those manga genres that seems unable to get a foothold in the U.S. It’s true that there are exceptions, such as Ooku, but for the most part, it doesn’t fare well. I’ve heard Europe is more welcoming of the genre, so I think it’s a shame we don’t follow suit here. A few years ago, I remember hearing about the launch of Aurora, the English language division for a leading josei publisher in Japan. But given what I just said about the genre’s popularity in the U.S., you can guess what happened to it. 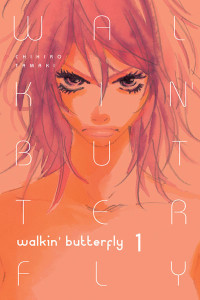 At any rate, Aurora’s launch title was a josei title called Walkin’ Butterfly. (Though for some reason it released as a shoujo here? Shows that the marketing people had an inkling of their uphill battle.) With Aurora’s demise, so too went all of their titles. Thankfully, Jmanga has much of that catalog up on their site and I finally was able to take a look at Walking Butterfly, having missed it the first time around.

Michiko Torayasu has always felt very self-conscious about her height. She’s extremely tall, you see, and sticks out in a crowd. She’s also rough around the edges, making her insecure about her femininity. Having graduated from school, Michiko is feeling lost and adrift. Her high school friends have found a direction in their lives so why can’t she?

When Michiko’s part-time job as a pizza delivery person takes her to a fashion show, however, she ends up being mistaken for a model. After all, the one place where a tall person would never look out of place is a fashion show. But the collection’s designer sees right through her and calls her out in front of everyone. Humiliated, Michiko decides that she will become a model just to prove him wrong.

As a heroine, Michiko is easy to identify with. What woman hasn’t felt self-conscious at one point in her life? That every part of it is wrong and that if it were just a little different, her life would be easier? It can take years for a woman to be finally comfortable in her own skin. Michiko is only in her late teens. Society in general, no matter the culture, can be very harsh when it comes to beauty standards and more so towards those women who diverge from those narrowly defined boundaries.

All of these things funnel into Michiko’s self-hatred. She’s in love with her childhood friend but feels that she cannot confess to him as she is now. She’s so insecure in herself and recognizes that fact. An event from her past also has her doubting whether a guy would ever like such a tall girl. Combined with the fact that her crush sees her as a sister, Michiko finds herself on multiple fronts: a life’s goal, a career, a romance. Her public humiliation finally pushes her forward in her decision to transform into a model worthy enough to walk down the catwalk.

If the focus of the manga had been on Michiko’s quest to transform herself into a runway model solely in order to win a man’s love, I definitely would not have liked that. The fashion industry, and in particular modeling, tends to focus on the superficial and not only is that a cliche, it’s a message I tend to disagree with violently. But I thought this volume avoided that trap nicely because it focused so much on Michiko’s alienation from Japanese ideals of feminine beauty.

Michiko is a very brash, somewhat abrasive protagonist. It worked here because she’s starting from a highly disadvantaged position. She is not someone you’d ever call girly. She delivers pizzas (a job normally associated with men) and used to work in a garage before. Full of self-hatred about her body, she doesn’t know how to highlight its strong points. If anything, she doesn’t know what its strong points are. Self-conscious about her height, Michiko has spent her entire life trying to hide herself whereas being a runway model requires drawing all attention towards her. So she needed that headstrong personality to make any forward motion. Otherwise, she’d never be able to climb over any of the hurdles already in her way.

The downside is that the actual meat of this first volume is short. I’m used to having roughly 200 pages, give or take a few, in my manga volumes. By contrast, Walkin’ Butterfly only had about 130 plus an extra about Michiko’s childhood. You definitely feel the lack of length. It seemed like just as the story was getting going, we reached the end.

The artwork is not what I would call my favorite. It’s very much a style I identify with josei, being very sketchy. But overall, I was fine with it and not deterred. I can see other readers being turned off, however.

Despite having a rather simple premise, I thought Walkin’ Butterfly excelled at exploring the struggles women have with accepting their own bodies. I think that, above all else, is what made the story for me, and made me invested in Michiko’s story. I’m looking forward to seeing her continuing evolution. B