It's the return of the manga review! I know it's been a while. While we can't promise that these will become a regular feature at Dear Author, I will try to review a couple titles occasionally. 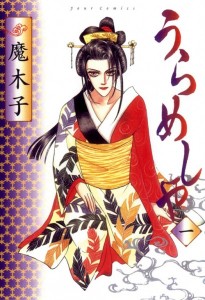 Dear Author was recently given the opportunity to look at JManga.com, a digital manga site that provides a subscription service for access to online English-language adaptations of many titles from several different publishers. The selection of titles is very diverse, maybe a bit quirky, but as someone who's read manga for long time, it's nice to see lesser known, obscure titles be the focus.

The first title I picked to review was Urameshiya, a historical manga about a woman with supernatural abilities. As an introduction to JManga's catalog, it was a good choice for me.

Urameshiya Oyou has a bad reputation around town. It's not through any fault of her own. You see, she has the ability to interact with the supernatural world. She can see ghosts. She can exorcise them. She can summon and trap them. People from all over consult her if they have a ghost problem.

As a result, however, they also find her creepy. They consider her bad luck. No one wants to spend more time around her than necessary and as the manga opens, we see Oyou get kicked out of a tavern and asked never to return because she was scaring away the other customers. Not because of anything she did, but because they simply had no desire to be around her. (Unless, of course, they need her help; then they flock to her.)

Oyou's bad luck continues after she leaves the tavern. She runs into a young man, who tries to steal her (sadly empty) wallet. But Oyou catches him in the act and prevents the theft. To make up for it, she tells the thief, Saji, to buy her sake and she'll consider his aborted crime forgiven. Attracted to the beautiful Oyou, Saji agrees.

But on the way to his home, they cross a bridge. It's a snowy evening, which makes it strange that a young woman waits there alone. Before they cross, Oyou warns Saji not to look into the other woman's eyes and to ignore her, no matter what she says or does. As expected, he finds this strange but manages to follow Oyou's instructions despite the girl attempting to get his attention. As they leave, however, a friend of Saji crosses the bridge behind them and converses with the girl.

The next morning, Saji awakes to find Oyou gone and a commotion outside his home. The friend he last saw the night before, alive and well, has been found frozen to death. Suspecting that Oyou knows the truth, he seeks her out once more and from there, the meat of our story begins.

I found myself unexpectedly intrigued by this series. Based on the description, I assumed it would be one of those episodic “person with supernatural powers runs into mysterious cases and various people with ghost problems” titles. And while it is that, it certainly did not start off the way I expected what with Oyou having a one-night stand with Saji. This genre doesn't usually have a romantic subplot so this was a pleasant surprise. In addition, none of the cases proceed quite the way you expect. Oyou sympathizes more with ghosts — no matter how vengeful — than humans, you see. In this way, it's similar to the original Petshop of Horrors manga.

There are three chapters collected in this first volume, each detailing a different case. The first, in which Oyou and Saji meet, is a variation of the yuki-onna tale. The second is about a well-to-do woman with a slight sexual problem: she has a vagina dentata. The final story is about fox spirits.

The stories on their own are nice enough, but what made them for me was the relationship between Oyou and Saji. Their relationship literally began as a one-night stand but somewhere along the way, Saji fell head over heels in love with her. Plots threads throughout the second and third chapters play on this fact, as outside parties try to split the two apart and prey on Saji's insecurities.

Yes, it's the man who's insecure in this relationship. Oyou is a very hard woman to read and she doesn't share her emotions easily. It's obvious she does share Saji's feelings but after a lifetime of people rejecting her for what she is or leaving her after growing tired of her “creepy” ways, Oyou doesn't wear her heart on her sleeve. She cares for Saji, but I think there's a part of her that doesn't trust he'll stay with her forever so she's never 100% truthful about her feelings. I thought this dynamic was appropriate for these two characters, given their respective backgrounds.

Urameshiya is set in historical Edo (aka Tokyo) during the Tokugawa era, which I enjoyed. I thought the artwork suited it well. There's a sort of old-fashioned retro feel to the style that fits a historical manga.

I liked this volume quite a bit. I wasn't sure what to expect since this is my first title from JManga but the quality is decent for a digital title. There's the occasional awkwardness in the placement of narrative text, most noticeable in the opening pages of the first chapter, but for the most part, it didn't detract from my enjoyment of the manga. I look forward to the continuing adventures of Oyou and Saji. Readers, however, take note of the rating. It's rated mature for a reason — as you'd expect of a manga where one chapter is about a woman with a vagina dentata. B