It’s been a while since I picked up a new shoujo title so after looking around a bit, I decided to give this a try. I admit I don’t often read shoujo manga much these days but it’s good to revisit the genre every now and again.

Takamichi Hachiouji comes from a family of demon hunters. As a child, she was considered unnecessary. Her older twin brother was to inherit everything so the rest of the family paid little attention to her and told her she didn’t need to bother with learning anything. Then one day her beloved brother died while protecting her, and now the unwanted child has become the heir. 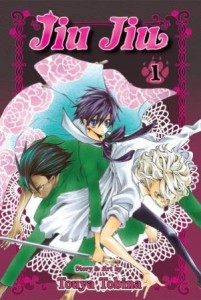 Her brother’s death left a mark. Takamichi doesn’t want to get close to anyone so she’ll never have to experience the pain of loss ever again. As an important member of the family, she’s assigned bodyguards but due to her difficult personality, she burns through them like butter. After losing yet another set of bodyguards, she’s finally given twin jiu jiu — half-human, half-demon creatures that take the shape of wolves — to raise.

Three years later, the pups have grown up and can take human form. In fact, their human forms look roughly the same age as Takamichi herself. (Dog years, after all.) The twin brothers, Night (Yuugure) and Snow (Setsu) want nothing more than to accompany their mistress everywhere and protect her from all threats. Takamichi just wants to be left alone. And so begins the story of an aloof girl from an established family of demon hunters and the two shapeshifting brothers who refuse to leave her side.

I wasn’t initially sure what to make of this manga. It starts off very manic, throwing Takamichi’s backstory and the jiu jiu brothers’ antics at us all at once. I thought the pace didn’t really settle until halfway through the volume. I suppose that’s not surprising. I find that a lot of manga has frenzied pacing at the beginning.

But I was lured in by Takamichi. I’m a big fan of prickly heroines at this stage in my reading life, and here we have one. She’d rather be alone. She overhears other family members criticizing her and she lets it roll off her. She’s armored her heart so she can’t be hurt again.

And that’s where I was charmed. Even though Takamichi cannot be bothered by other people, raising Night and Snow has unwittingly introduced a weakness to her emotional armor. I thought the relationship between the three of them was lovely. Takamichi raised them out of obligation — if she didn’t agree to take them in, what would happen to them? Nothing good, that’s for sure. But unlike the bodyguards who’ve left her time and again, the brothers saw through the cold exterior she presented them. Instead of being pushed away, her attitude made them more determined to earn her praise.

The brothers are your typical shoujo manga archetypes. As brothers, they’re opposites. Snow is easygoing and laid-back. Bespectacled Night is serious and respectful. As the two major guys in Takamichi’s life, they’re contrasts. The one thing I liked was that the manga does touch on the brothers’ relationship with each other, in addition to their relationship with their mistress. They both want to please Takamichi but there’s also a certain amount of competition between them. It’s nothing overt but it does come out at times.

I wouldn’t be surprised to see romance develop in the future. It is a shoujo manga, after all. I’m a little iffy at seeing any romance between Takamichi and either of the brothers. Again, I wouldn’t be surprised if it happened given genre conventions and tropes and all, but the thought makes me a little uneasy. She did raise them and even though they look like teenage boys in their human form, they’re still only three. My brain shies away at the thought.

The art took a little while to get used to but I found myself liking it by the end. I’m particularly fond of the flashbacks depicting Night and Snow as puppies. Night’s puppy form was adorable since his wolf shape has two light spots near his eyes – hinting at the need for glasses in his human form.

While I’m not sold on the idea of romance developing in the future — and who knows, maybe it won’t — I did find myself intrigued by Takamichi and her burgeoning self-awareness and self-acceptance. I also liked that even when the brothers were in human form, they acted like wolves — and immature ones at that. None of the cliched alpha male stuff here. They want to play frisbee and go for walks. It’s cute. I’m interested in finding out more and on board for the next volume. B