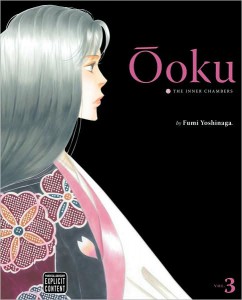 A few months ago I reviewed the first volume in this historical josei series by Fumi Yoshinaga. In it, we were introduced to an alternate history of Tokugawa era Japan where the majority of the male population was stricken with a fatal disease called the Redface Pox. Due to the lopsided gender demographics that resulted, the power hierarchy in Japan was forever changed: women held positions of authority while men, in scarce supply, were coddled and protected.

In volume 1, the last member of the direct line of the Tokugawa shogunate dies and a woman from a branch line, Yoshimune, ascends the title. In addition to instituting reforms that scandalize and shock the court, she delves into the history of the Redface Pox, kept meticulously in an archive called Chronicle of a Dying Day.

Volume 2 opens with that history, taking us back in time to just before the Redface Pox struck the population with devastating force. In that volume, we were introduced to the daughter of the last male shogun, Chie, who has been forced into a charade for the sake of maintaining peace and order. No one outside of the court knows that the last male shogun, Iemitsu, succumbed to the plague. Instead it is a combination of Chie-masquerading-as-a-boy and male retainers projecting their voices who continue the deception. A heavy burden has been placed upon Chie — denied her own name and now called Iemitsu — who, in the hopes of continuing the line, must bear a male heir.

Volume 3 continues the story of Iemitsu and Arikoto, the abbot who was brought to court to be a concubine, who have found an unlikely love despite their circumstances. But unfortunately, it is not meant to last. Despite the fact they have been lovers for a year, Iemitsu has yet to conceive. She remains certain that the inability is her fault; early on during her stay at court, Chie was raped by a retainer who didn’t know her true identity. Chie is convinced both the rape and the difficult birth of the stillborn child that resulted caused irrevocable damage to her womb. Lady Kasuga, Iemitsu’s attendant and the effective ruler of the Inner Chambers, is not so sure and brings other men to court, evicting Arikoto from his place in Iemitsu’s bed in the process.

I have to take back what I said in my review for volume 1. There is a romance here because the relationship between Arikoto and Iemitsu can’t be read in any other way. But for all their desire to remain true to their hearts despite everything thrown at them by fate, I can’t see this ending well. In fact, I’m almost 100% sure this will not end well so I still can’t recommend this title sans reservation to readers looking for a romance manga. It’s not one and it’s not meant to be, so expecting an HEA here is unreasonable.

What it excels at, however, is depicting people with realistic reactions and believable emotions in these circumstances. Arikoto and Chie try to fight fate and cling to each other as hard as they can which, considering the hand life has dealt them, is better than either could expect. I will warn readers, however, there is a lot of drama surrounding their now-starcrossed fates so if your tolerance is low for this sort of thing, the middle sections may try your patience. Or, if you like this sort of thing, you will find it riveting.

I did enjoy watching Chie come into her own, and become the Iemitsu she’d been masquerading as in truth. In this volume, we see the seeds of how the power in the shogunate switched genders. Remember, Chie’s sole purpose to bear the next male heir. I don’t think it’s a spoiler, considering what we first see in volume 1 and its female shoguns, to say that obviously didn’t happen. I really liked seeing Chie surprise the advisors with her intelligence and acumen. Her suggestions and ideas were often better than that of the advisors themselves. It makes what happens in the final pages of this volume even more momentous.

Despite the focus on the Inner Chambers and the shifting balance in the shogunate, we also see how the outside world begins to change with new gender spread. Even though the title of the series is ÅŒoku and as a result, its focus is on the shogunate’s inner workings, I do wish we could have seen more of the peasant characters and their lives. Of course, I do wonder if maybe the change in power dynamics grows more accepted when a female shogun rules openly.

While I wasn’t quite as spellbound by this volume as the previous two, I did enjoy what I read and I thought it was an excellent continuation of a stellar series. I thought it was an excellent transition into what we all know is soon to follow. I can’t wait to see what happens when a female shogun takes power openly without any masks or charades, and what it’ll mean for Iemitsu and Arikoto. B