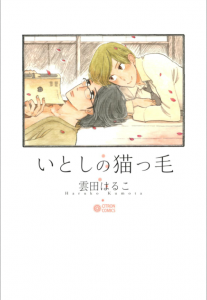 I can’t deny it was the title that caught my attention. What on earth does My Darling Kitten Hair mean? I didn’t know when I started reading this comic.

Still don’t after I finished reading it.

Well, I do have my guess as I think I found the answer in a bonus chapter. Regardless, I enjoyed the ride through Haruko Kumota’s good-natured tale of a male couple moving in together and adapting to unexpected revelations about each other. Enough to earn grade B off me, anyroad.

Keichi “Kei” Sawada is utterly thrilled when he finally moves from Otaru, Hokkaido (think Alaska or Greenland), to Tokyo to move in with his boyfriend, Hanabishi “Mii” Misaburo, whom he’s known since they were six years old. They’ve been dating for six years, in spite of Mii moving to Tokyo when they graduated after their high school.  Kei imagines that now he’s arrived, their home would become their cosy love nest.

His dream, however, gets smashed to smithereens when he discovers Mii’s home, Matatabi House, is actually a boarding house where a small bunch of odd people also live. A sexy, fun-loving and busty single mother with an eight-year-old sweet son. A dopey, nerdy and soft-hearted pervert. A tall, cheerful transvestite. A cat named Nana (Seven). And there’s Mii, whom he discovers has been hiding some little truths from him. 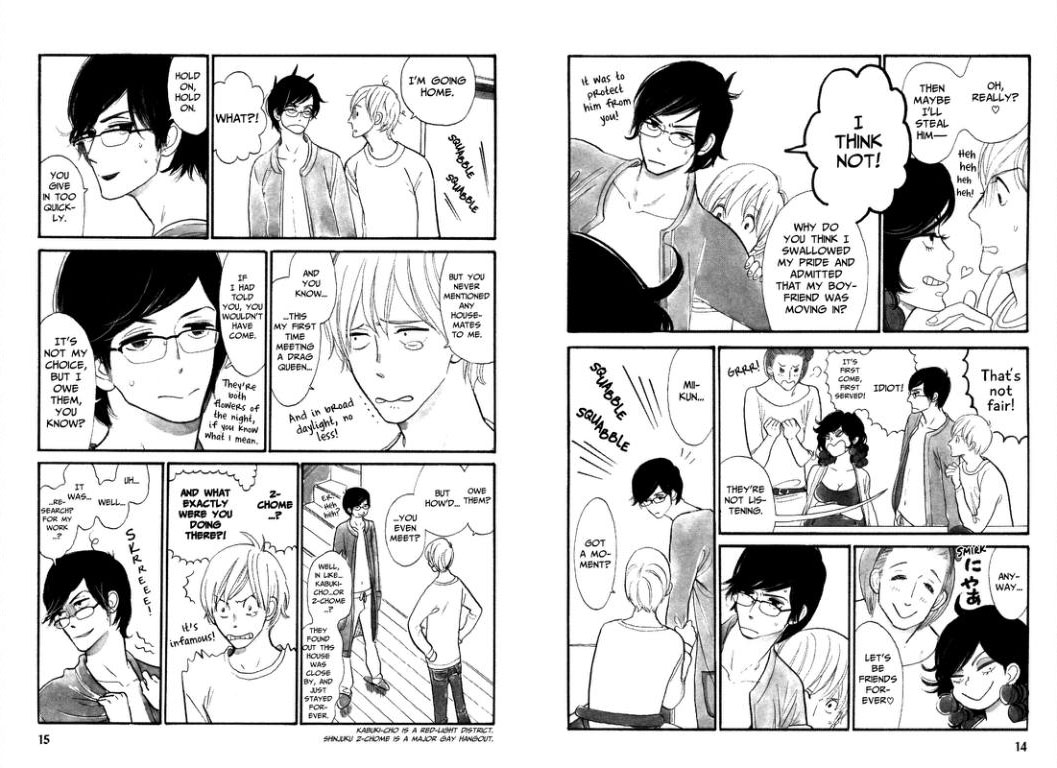 In spite of his apprehension, Kei settles in quite quickly by finding a job as a salaryman (office employee), learning to take his housemates’ quirks in stride, and getting know to his beloved boyfriend better.

And that’s when they run into a wall. Namely, the physical state of their relationship.

In spite of being together for six years, they haven’t consummated their relationship yet. They have their reasons for not wanting to take their relationship to the next level, no matter how much they want to. On top of that, they’re surprised to discover another depth to their personalities and quirks along the way.

My Darling Kitten Hair is – in form of the main story as eight chapters with two bonus chapters – largely an episodic story that, while charming and funny, doesn’t quite sink its teeth into issues and walls Kei and Mii face. Each wall they encounter, they knock it down with a simple but straightforward talk after fretting for a moment or two. They seem to just glide through their adjustments.

Basically, there isn’t any deep angst. Nor is there a villain, serious dilemma and unknockdownable wall. There are some moments of anxiety, concern, insecurity and jealousy, but nothing deep. At times, it seemed almost like I was watching a Disney film of the 1960s where everyone’s charming, perky and affectionate, even when cranky, sulking or – thanks to secondary character Haruki – devilish. 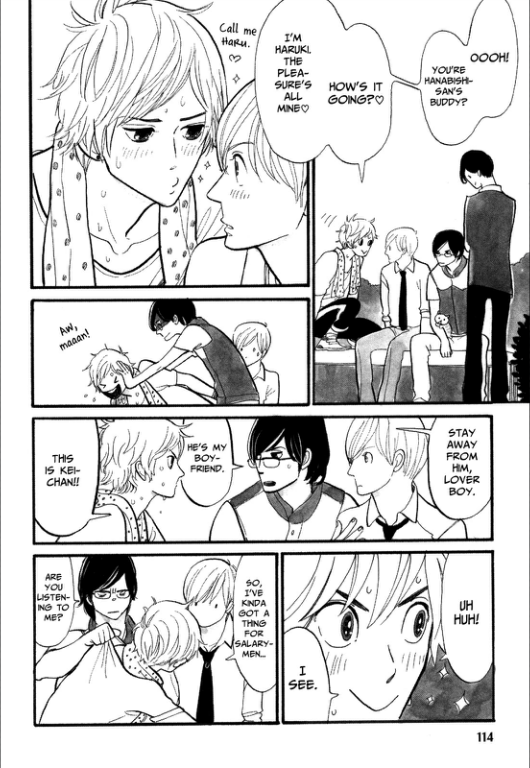 Oh, sure, Kei and Mii have two human walls, in form of Mii’s grandmother and Mii’s cynical colleague, who aren’t that impressed with their relationship, but they don’t make life difficult for them. Well, they do have their own ways of tormenting them, which Kumota’s clearly intended as a comedic effect.

I was surprised the story doesn’t involve boarding house residents that much. Thanks to the first chapter, I was led to believe they would have bigger roles in the story, but they don’t. The main story focuses on Kei and Mii knitting their lives together whilst at the house and outside and when alone or with other people.

All this does make it sound as if My Darling Kitten Hair is shallow and rather forgettable, but no. It’s comic artist Kumota’s art that makes her somewhat mediocre story surprisingly a stand-out.

Basically, there’s so much going on in her art. Face and eye expressions, body language, and sound effects (which are mostly left intact with English translations next to them). She has successfully made each character’s looks unique, which makes it incredibly easy to tell them apart. She’s also successfully made all characters’ personalities shine through. Even Nana the cat.

The pacing seems pretty spot on. And so is the comic timing. The English translation, as a whole, is pretty good (only one grammatical error, which is seriously a miracle!). It’s managed to make all dialogue seem to flow naturally, which makes the reading a nice breeze.

It’s all those that makes it such a fun and charming read.

The main story somewhat tapered off towards the end, which suggests there would be another volume. My best friend Google tells me my guess is right. Further adventures of Kei and Mii are currently serialised, which could mean the second volume of My Darling Kitten Hair wouldn’t be complied until at least 2013.

If there’s anything I liked about My Darling Kitten Hair, it’s how solid Kei and Mii are with their relationship. Even though one has expressed moments of concern whether his beloved truly loves him. In other words, their relationship is pretty ordinary. And this makes it a rather refreshing change. Especially after I waded through a recent batch of comics that revolved around crazy melodrama, dark angst and wtfery. Nice one, Kumota.

But that title? Doesn’t make sense. Same in Japanese. It may refer to one of Mii’s favourite things about Kei, as mentioned in a bonus chapter, but that’s just a wild guess. Judging by the titles of comic artist Kumota’s other works, quirky titles seem to be one of her trademarks. The English translator could at least modify it as ‘My Darling’s Kitten Hair’ or ‘My Lovely Kitten Hair’ to make sense somehow.

As for the maturity rating, there are partial nudity, mild profanity, some kissing and one sex scene. I would say it’s fine for readers age 16 and over. Or with parental guidance, 14+.

As far as I can see, My Darling Kitten Hair is available only at JManga. I wasn’t exactly over the moon when I learnt all JManga titles can only be read online at the site, but when I explored the basic functions of their comic reader, it isn’t too bad. Especially when I discovered the online reader’s Full Screen mode function. I’ve never liked reading a comic within an online comic reader or a web browser. So it’s great that the Full Screen mode has helped me to forget I was even at the site while reading the comic.

I still can’t work out how JManga’s subscription system operates, though. In fairness to them, I have dyscalculia (like dyslexia, but with number, value, distance and time) so I can’t say whether JManga offers good value for a digital comic like this one.

My Darling Kitten Hair is worth getting if you’re looking to give JManga a trial run. Or for a charming introduction to the BL comic genre.